Zachary Levi took to Twitter Monday evening to ask for prayers for his father Darrell Pugh, who he said appears to be in the final stages of a cancer battle.

‘Sittin in my dad’s hospital room with him,’ the 42-year-old actor said. ‘He’s not doin so hot right now. The thyroid cancer just won’t quit, and is slowly overtaking his trachea.’

The Lake Charles, Louisiana native said that while doctors ‘may have a trick or two still up their sleeves to offer him a bit more time … Papa D is not long for this world.’ 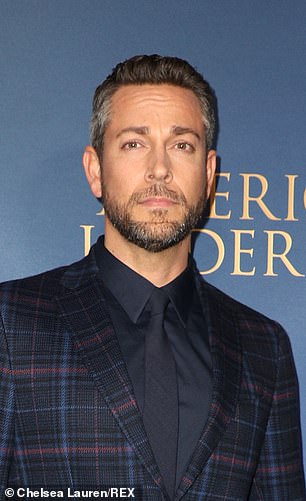 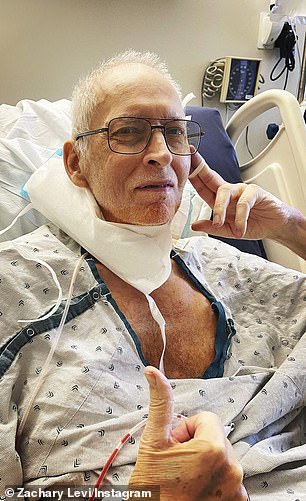 The latest: Zachary Levi, 42, took to Twitter Monday evening to ask for prayers for his father Darrell Pugh, who he said appears to be in the final stages of a cancer battle

The Shazam! star said that ‘for anyone out there that feels like rollin up some spiritual sleeves and prayin, send some up for my pops.

‘Pray that he be as comfy and at peace as a man could get. And that he head home with no fear or regrets, knowing how loved he is.’

The Chuck actor, responding to a fan, said he was ‘doin just fine’ amid the emotional time.

‘Death does not sadden or frighten me,’ he said. ‘It’s actually an incredibly powerful part of life. One that we’ll all reach one day. Where we get to go back to God, the source, and be surrounded by the highest vibration of energy, love.’ 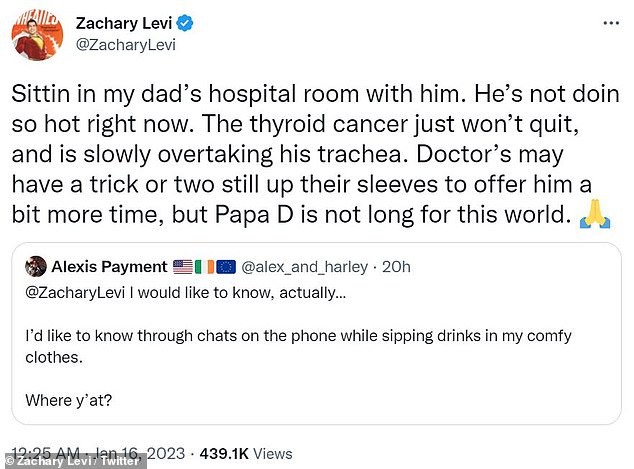 The actor told a fan he was with his ailing father, who is in the final stages of thryoid cancer 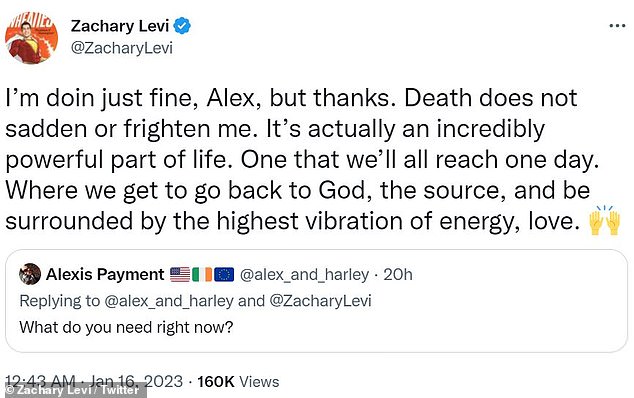 The Chuck actor, responding to a fan, said he was ‘doin just fine’ amid the emotional time

The Shazam! star asked for prayers for his father’s peace and comfort amid the late stages of his health battle

Levi received kind responses from colleagues including Dean Cain, Sean Maguire and Jane Lynch, who wrote, ‘Love and comfort and peace to you and Dad.’

Levi had past posted a clip of his father in late November, ahead of a surgery he was set to undergo in the ongoing cancer battle.

He took to the site following the procedure with an update about his father’s health.

‘The surgery went very well, and the surgeons were able to remove 90% of the cancer from his body! PuuuhRAISE!!!’ Levi said. ‘Thank you all for your continued and humbling show of love, and light, and thoughts, and prayers, and just overall intentional, positive energy that you have sent his, and our, way. It has meant more than any of these words can really say.’

The American Underdog actor said that following the procedure, the hope was that his father’s quality of life would improve combining a targeted medication regimen and a natural diet so he could get ‘back to living his life, pimp walkin his way down the promenade in Ventura, puttin out the Papa-D vibezzz.’

Levi wrapped up in saying, ‘Sending you all the most insane amount of love and gratitude.’

Zachary Levi on Sunday revealed on social media that his father Darrell Pugh has died after a battle with cancer.  The Shazam! Fury Of The Gods...
Read more

Nicola Peltz has become the new face of GCDS, starring in a new fashion campaign for the Italian brand.The 28-year-old actress looked nothing short...
Read more

ICICI Bank is back as MFs’ favoured pick on valuations, growth

has emerged as one of the top holdings of domestic equity mutual funds in the past year after falling out of favour...
Read more

Advice for Planning a Successful and Empowering Business Event

There are lots of reasons why you may wish to hold a business event. Perhaps you are looking at diversifying your business. Or, maybe...
Read more
Business

Why You Should Consider Hiring a Fire Watch Guard Service for Your Business?

Fires are one of the most common causes of property loss. This is why it’s necessary to have some kind of fire protection for your property. Fire watch guard services are an effective way to mitigate these risks
Read more
Business

Taking a look at Appcues’s Competitors and Alternatives

Concerning Appcues: Appcues touts itself as a "platform for product-led growth." It assists businesses in onboarding new users and increasing acceptance of new features. Through...
Read more