The US shale patch is holding back on big production boosts despite bumper profits and surging crude prices, as executives seek to avoid being punished again for responding with rapid investment.

Although US crude prices have doubled in the past 12 months, the number of operating oil rigs — just 373 last week, according to Baker Hughes — remains well below levels of recent years. US oil production is languishing almost 15 per cent beneath last year’s record high near 13m barrels a day.

Industry observers and insiders had expected a rapid recovery from the US shale industry. Now tepid spending and sluggish oilfield activity could leave supplies short as demand recovers.

“We are underinvesting as an industry around the globe,” said Rick Muncrief, chief executive of Devon Energy, one of the largest US shale producers.

Devon has nevertheless pledged to hold production flat this year and cap any growth in 2022 at just 5 per cent — less than half the annual pace across the shale patch in the three years of bumper output rises before the pandemic.

After years of outspending, Devon is among the shale groups that have pledged to use windfalls from higher prices to strengthen their balance sheets and return capital to investors through dividends or share buybacks.

“The days of needing to grow [production] at double-digit rates, that’s behind us,” Muncrief told the Financial Times. “The industry has overbaked too many times.”

Shale’s spectacular production success in recent years made the US the world’s largest oil producer but beggared many of its investors. The sector burnt through hundreds of billions of outside capital and failed consistently to turn a profit.

But the stock market is beginning to reward companies willing to return capital and ignore the urge to launch another drilling rush. Shale producer Diamondback Energy’s shares have doubled this year and Devon’s are up almost 90 per cent.

The S&P 500’s energy sector, dominated by US oil companies, has outperformed all others this year, as the market has endorsed the new low-growth mantra.

“If there ever was a time to drill tight [shale] oil, now is a great time,” said Robert Clarke, vice-president of upstream research at consultancy Wood Mackenzie. “But why would you change the recipe? Not drilling is working in their favour.”

Listed companies’ reluctance to risk these equity gains by increasing spending means it is private equity-backed operators — which do not face the same scrutiny as public companies — that have accounted for most of the modest increase in oilfield activity this year, according to consultancy Rystad Energy.

Some executives believe the inventory of high-quality — and highly profitable — shale-bearing rocks in the US is dwindling, hindering a recovery. While activity has picked up in the prolific Permian Basin of New Mexico and Texas, it has been slower in other areas, such as North Dakota’s Bakken oilfield, where the best acreage has been drilled.

“It’s a real headwind now,” he said. “To drill a bunch of wells — what are we drilling into? Is it a constructive commodity price environment or are we going to see a rapid transition away from oil and gas that’s going to result in soft commodity prices and ultimately poor returns?” 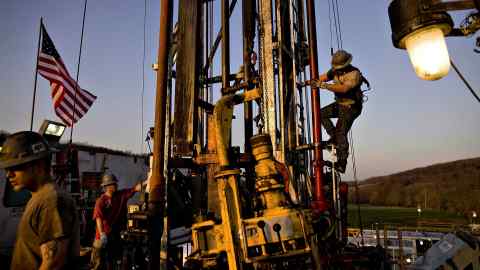 Even companies such as ExxonMobil, with a history of investing through periods of oil market turbulence, have been forced by shareholders to rein in planned upstream spending. In the Permian Basin alone, Exxon planned in 2019 to increase output to 1m barrels a day by 2024. This year it cut the target to 750,000 b/d.

“Now we’re basically $15 a barrel higher and those plans have been massively compressed, with no signs of coming back,” said Clarke.

Rystad said shale production could still grow by as much as 1m b/d next year if prices remain at current levels — less than the 1.2m b/d seen in 2019, when oil prices were lower.

At less than 1 per cent of global demand, that supply increase is unlikely to trouble the Opec cartel, which meets this week to decide whether to lift its own production after more than a year of supply cuts to prop up prices.

“They’re happy to push prices up because there’s no longer a fear of a shale response,” said Williams.

Devon’s chief agreed that the cartel would be comfortable with shale’s “measured” response to the latest oil rally.

“I do think they will have a collective sigh of relief,” said Muncrief.

When a truck accident occurs, the results are often catastrophic. Trucks are much different than typical cars in size and weight, so the results...
Read more

Here Is All You Need To Know About Lightweight Crane Systems

choosing the right lightweight crane systems could be easier if these mentioned-abovefactors to keep in mind.
Read more

'You can't make this up': Love Island fans go wild after...
Read more

The results in the latest quarter are a sign of the company’s financial strength as it faces a public relations crisis.Source link
Read more

Well, the first concern that any beginner has when considering, how to start Amazon FBA business is how much it will cost to get started.
Read more
Business

Ideas for Informal Recognition That Make a Difference

You are a business leader, and you have more to do every day than think about ways to keep your workforce engaged. Yet, if...
Read more
Business

Have a big office party coming up and want this event to be absolutely picture-perfect? If yes, a professional event hire team can help...
Read more

Lydia Bright 'relived her childhood' through her daughter Loretta's eyes as they enjoyed a magical trip to Disneyland Paris over the weekend to...
Read more
Entertainment

First Dates star Merlin Griffiths has revealed that he's been discharged from hospital after having his stoma removed amid his bowel cancer battle. Merlin was...
Read more