Florence Welch returns to the stage after breaking foot on...

Steven Hendry was unmasked as the celebrity behind Rubbish during Saturday evening’s The Masked Singer.

The snooker pro, 54, was left in the bottom two after receiving the least amount of votes alongside co-star Jacket Potato.

And after the judges decided to save the latter, Rubbish was unmasked as the Scottish sportsman before leaving the show. 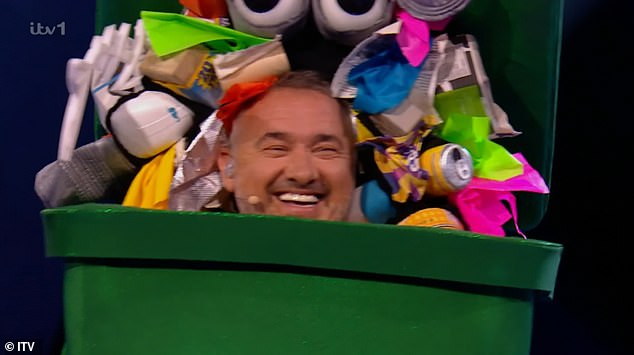 Snooker pro Steven Hendry, 54, shocks The Masked Singer panel as he is unmasked as Rubbish after being voted out of the show

He was first up to perform in the show earlier on, opening with a cover of The Kaiser Chiefs’ hit song Ruby.

And despite Steven leaving a trail of snooker hints during the performance and clue clips, many fans were convinced that it was a member of JLS behind the mask.

But panellist Jonathan Ross had it on the tip of his tongue as he figured out that it was a snooker player, but guessed the wrong one by suggesting Ronnie O’Sullivan.

After being unmasked, Davina asked Steven why he did the show, to which he replied: ‘I love the show, and it’s obviously way out of my comfort zone.’ 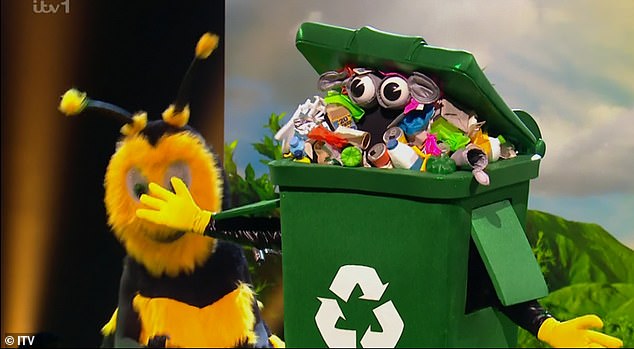 Performance: He was first up to perform in the show earlier on, opening with a cover of The Kaiser Chiefs’ hit song Ruby

Judges Rita Ora, Mo Gilligan, Jonathan Ross and Davina McCall were back in the judging hot seats to make their guesses at who was behind each mask.

And it was ‘clue fest’ evening on the show, with each contestant providing a clip full of extra clues ahead of their performances. 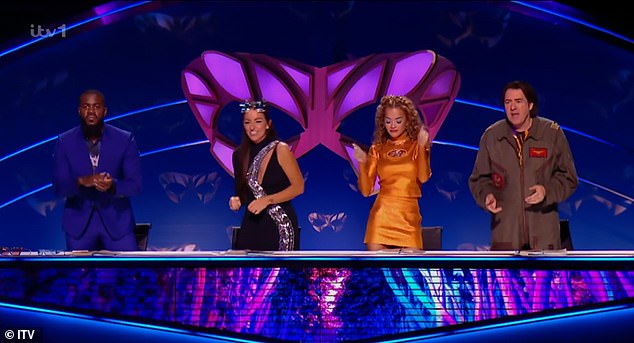 And many fans guessed that the performer was a member of former band JLS, but they couldn’t quite decide which one it was.

Fawn then took to the stage with a performance of Madonna’s Into The Groove.

Rita said: ‘I love Fawn, it’s just you confuse me the most’ 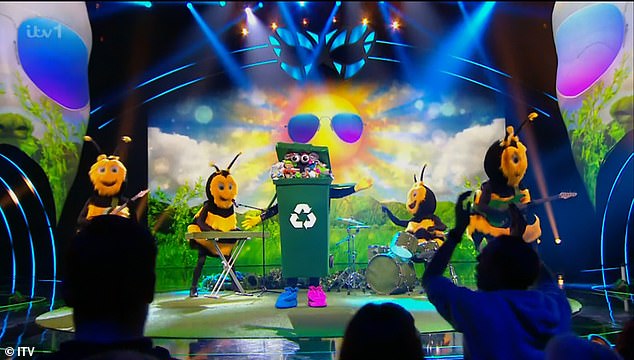 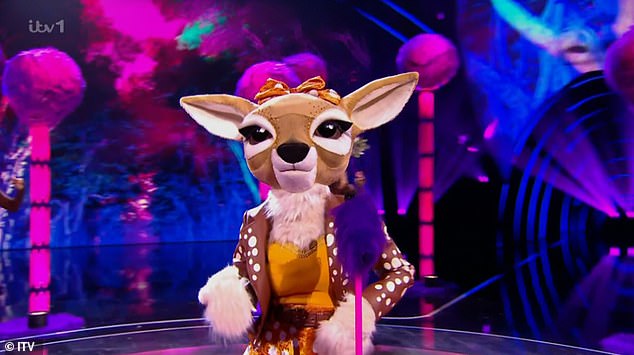 While Jonathan guessed that the person behind Fawn was Anne-Marie, before Rita interjected: ‘No, there’s no way, her voice sounds nothing like Anne-Marie’.

‘Whoever it is in there, they’re a maniac. In that picnic scene they were putting marmelade on a scone, that’s criminal!

Fawn made a reference to being in ‘topsy turvy land’, which the judges interpreted as Australia, comparing the phrase to ‘down under’ as Mo guessed Dannii Minogue.

Davina put Jacqueline Jossa’s name into the ring, noting that she had been on I’m A Celebrity… Get Me Out Of Here!, which is filmed in Australia. 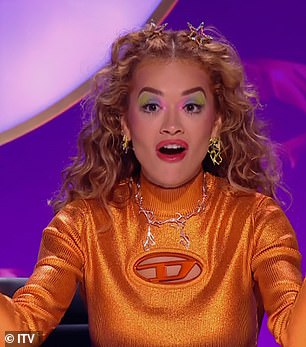 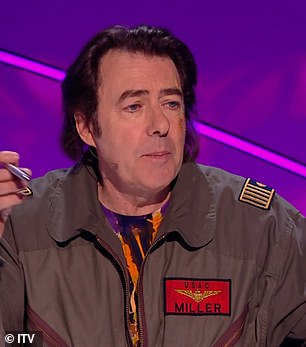 In costume: Rita Ora (left) looked sensational in a bright orange ensemble and colourful eyeshadow while Jonathan Ross (right) looked as though he was ready to hop into Top Gun 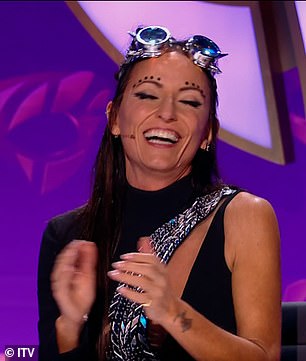 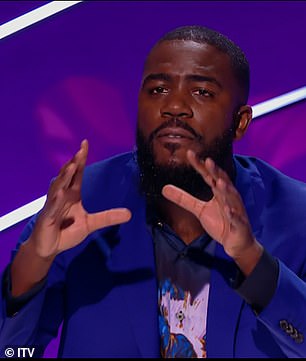 Pop of colour: Davina McCall (left) went for goggles and a feline eyeliner look, as Mo Gilligan (right) added some colour with a vibrant blue suit 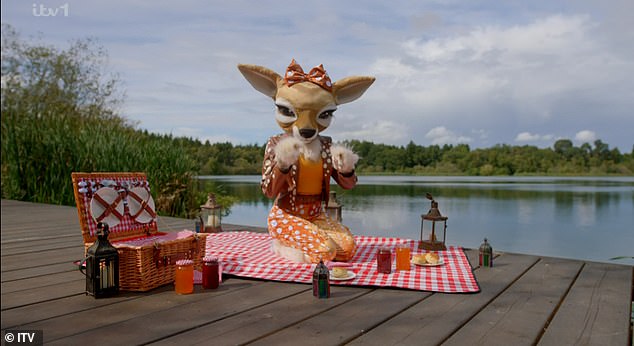 Jonathan jested: ‘Whoever it is in there, they’re a maniac. In that picnic scene they were putting marmelade on a scone, that’s criminal’ 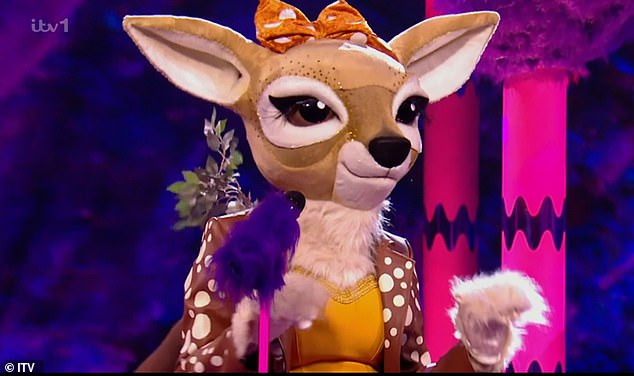 Rhino was next to the stage, and gave a collection of clues that he was someone from the US – with references to the Big Apple and a western costume.

With an incredible performance of Pink’s Try, whoever was behind the mask certainly had a strong voice as they showed off her talent.

Many fans were convinced that Rhino is James Arthur, with the voice sounding extremely similar to the hitmaker.

Viewers took to Twitter to share their guesses, as one penned: ‘I’m sorry but I said it on the first line last time and I’m saying it again @JamesArthur23 that is definitely you #MaskedSingerUK that voice is unmistakeable. If I’m wrong I’ll honestly be shocked fantastic vocal my hairs are stood on end’. 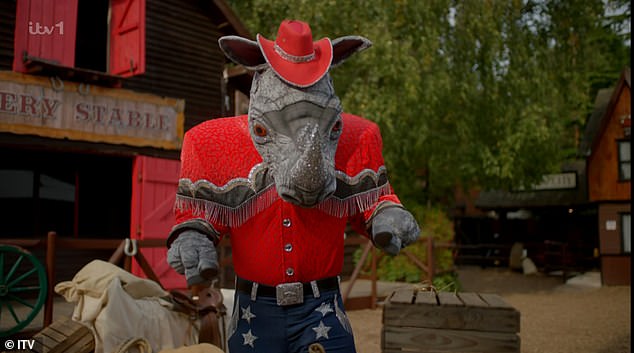 Cowboy: Rhino was next to the stage, and gave a collection of clues that he was someone from the US – with references to the Big Apple and a western costume 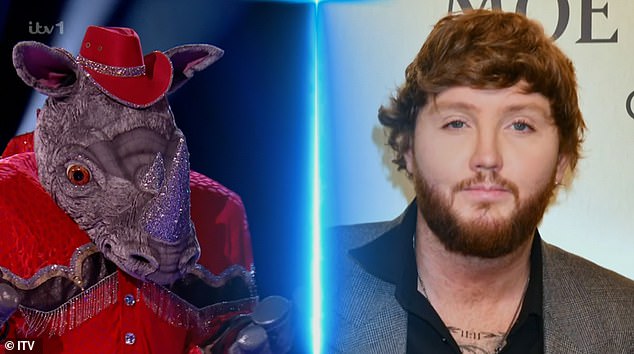 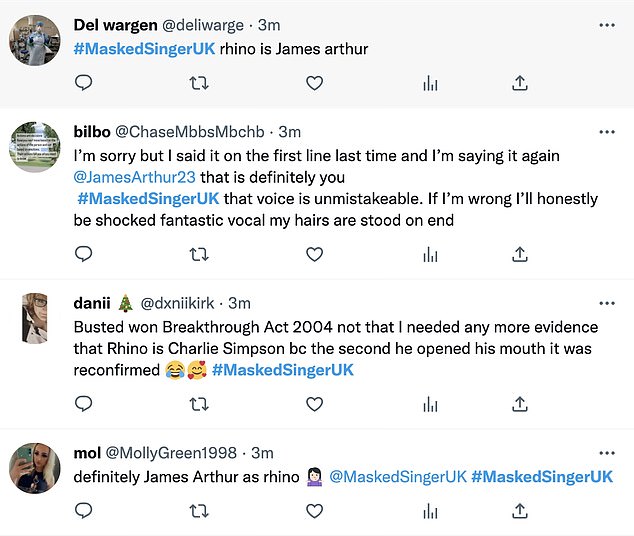 Guesses: Many fans were convinced that Rhino is James Arthur, with the voice sounding extremely similar to the hitmaker

And Jonathan was on the same wavelength as he shared that Rhino was ‘a real superstar’ and guessed James.

But the judges thought different, as Mo guessed rugby player Thom Evans, who is in a relationship with Nicole Sherzinger, who hails from New York – relating to the Big Apple hint.

Dubbing Rhino one of her favourite voices in the competition, Davina guessed Joe Jonas. 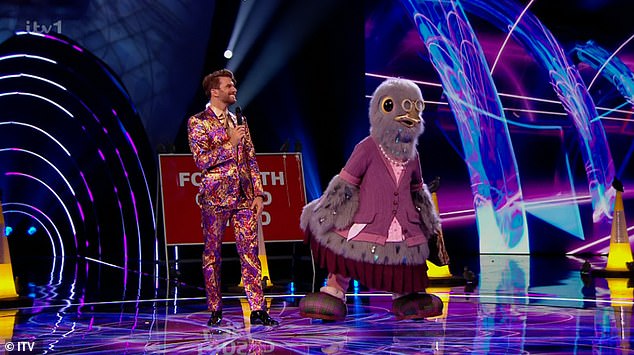 Pigeon then took to the screen with a strong Essex twang, which the panel guessed was fake to send them off of the scent.

After the performance, the star had the judges in stitches as she jokingly flirted with host Joel with dance moves, along with over-the-top gestures.

‘She’s got to be a comedian of some sort, last time I said Emily Atack, and she’s so funny Emily. It’s Emily Atack,’ said Davina.

But Mo was sure it was Gemma Collins, while Jonathan jested the dance moves reminded him of Theresa May, before seriously guessing it was Linda Robson.

Next it was Jacket Potato’s turn, who turned the mood by singing Hallelujah.

‘Wow, wow, wow, that was unbelievable, I’ve never heard it sung in that way,’ began Rita.

As Joel added: ‘Well, I think it would be weird if you had heard it in that way, with a jacket potato singing it.’

‘Come on, don’t butter me up the wrong way Joel,’ replies Rita as she was on point with her puns.

The songstress guessed that the food reference meant it was a TV chef, suggesting Gino D’Acampo.

As decision time came, Pigeon, Rhino and Fawn were put through – leaving Rubbish and Jacket Potato to sing in the bottom two.

The mandate was won after a closely contested multi-agency pitchVMLY&R has been appointed the agency-on-record (AOR) for Jockey’s digital communication mandate in India....
Read more

The Benefits of Investing in Small Gold Bars

Whether you’re a seasoned investor or new to the world of precious metals investing, gold bars is generally seen as a safe financial hedge against both economic and political turmoil.
Read more

With the threat of the Delta Plus variant and India unlocking, the government needs to increase the pace of vaccination to protect itself...
Read more

How To Throw The Perfect College Dorm Party

A guide with everything you need to throw the collage dorm party! Here are 7 tips on how to plan and execute your ultimate collage bash.
Read more

FPIs net sellers of Indian equities worth Rs 6,427 cr in May so far

What do you have to do with a car to keep it going on for a long? You need to change the oil and...
Read more
Business

Take Your Entertainment Experience To The Next Level With Tata Play

Since its inception, modes of entertainment have evolved substantially. People used to meet in a specific house in a locality to watch television, but...
Read more
Business

Being in charge of your own business puts many responsibilities in your hands. Sometimes, you might find that not all aspects of your company...
Read more