Sean Penn, 62, and Robin Wright, 56, remain friendly exes but have not renewed their romance, it has been claimed.

The duo ignited reunion rumors this month when they were spotted together twice in Los Angeles, including once while jointly waiting for a car at LAX airport.

A source has informed People that their relationship is platonic: ‘They are both single right now and get along great. Sean has always said that Robin is the love of his life.’ 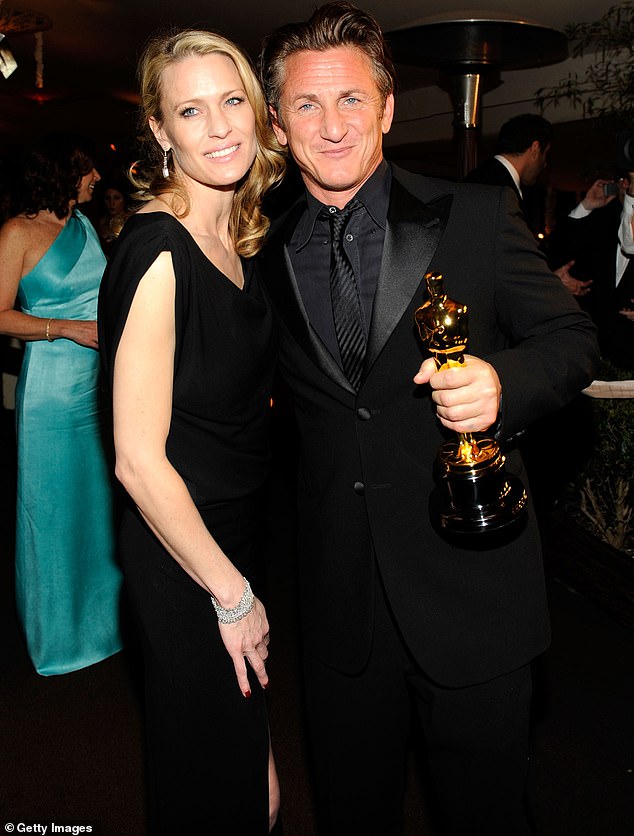 The way they were: Sean Penn, 62, and Robin Wright, 56, remain friendly exes but have not renewed their romance, it has been claimed; they are pictured at the 2009 Governor’s Ball

The insider added that Sean ‘regrets many things that happened during their marriage. He really enjoys spending time with her now.’

Robin and Sean, who tied the knot in 1996, had multiple splits and reconciliations before their 20-year romance finally fell apart for good in 2010.

They have two adult children, a daughter called Dylan, 31, and a son called Hopper, 29, who have both followed their parents’ footsteps into show business.

Robin and Sean were spotted enjoying a meet-up in Los Angeles this past Friday, days after they were glimpsed waiting for a car together at the airport. 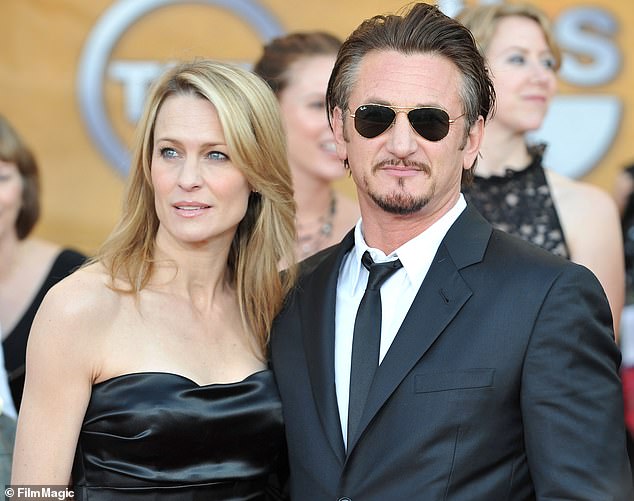 Throwback: A source informed People: ‘Sean has always said that Robin is the love of his life’; they are pictured at the SAG Awards in 2009, the year before their divorce

Both of them recently saw their third marriages collapse, with Robin filing for divorce from her 37-year-old husband Clément Giraudet in September.

The Forrest Gump actress, who has no children with Clément, listed the date of their split as July 31 in the divorce filing according to TMZ.

Meanwhile last April Sean finalized his divorce from his latest wife Leila George, who at 30 is younger than his daughter Dylan.

Leila’s mother Greta Scacchi is only six months older than her ex-husband, while her father Vincent D’Onofrio is only a year older than Sean. 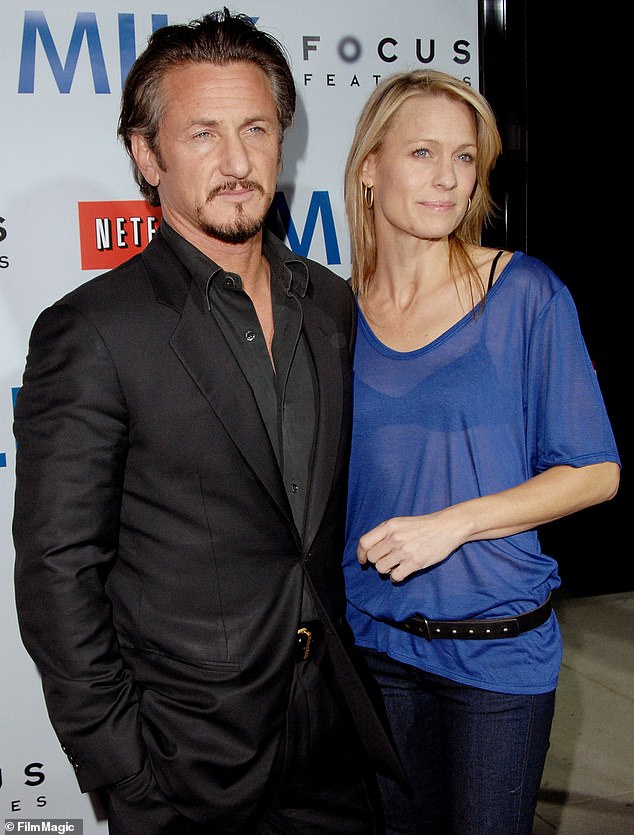 History: Robin and Sean, who tied the knot in 1996, had multiple splits and reconciliations before their 20-year romance finally fell apart for good in 2010; pictured in 2008

Shortly before the divorce was finalized Sean confessed in an interview with Hollywood Authentic that he was still ‘so in love’ with Leila.

He admitted to having ‘f***ed up the marriage,’ saying: ‘We were married technically for one year, but for five years, I was a very neglectful guy.’

The Oscar-winning actor clarified: ‘I was not a f***ing cheat or any of that obvious s***, but I allowed myself to think that my place in so many other things was so important, and that included my place in being totally depressed and driven to alcohol and Ambien at 11 o’clock in the morning, by watching the news, by watching the Trump era, by watching it and just despairing.’

Sean noted that ‘beautiful, incredibly kind, imaginative, talented young women who get married to a man quite senior to them in years, they don’t actually love it when they get up from their peaceful night’s sleep and their new husband is on the couch, having been up since four, watching all of the crap that’s going on in the world and has decided that 10:30 in the morning is a good time to neck a double vodka tonic and an Ambien and say: “Good morning, honey. I’m going to pass out for a few hours and get away from all this s***.”‘ 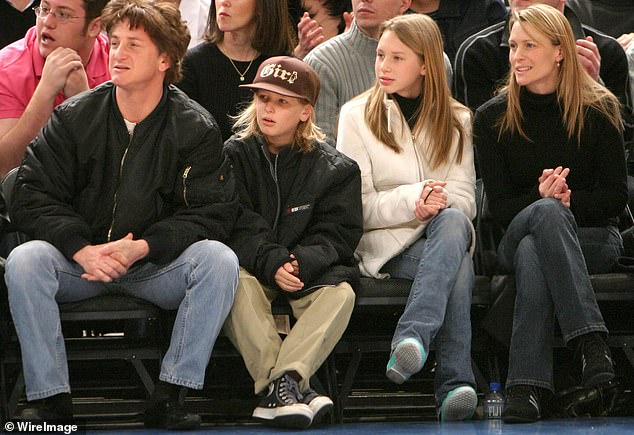 Family time: They have two adult children, a daughter called Dylan, 31, and a son called Hopper, 29, whom they are pictured with in 2004

Rumors circulated at the beginning of August 2020 that Sean and Leila had secretly gotten married after four years of dating.

News of the wedding spread when they received congratulations on Instagram from Josh Brolin, as well as from movie producer Mike Medavoy’s wife Irena.

A few days later Sean went on Late Night With Seth Meyers and showed off his gold wedding band, confirming that he had married for a third time. 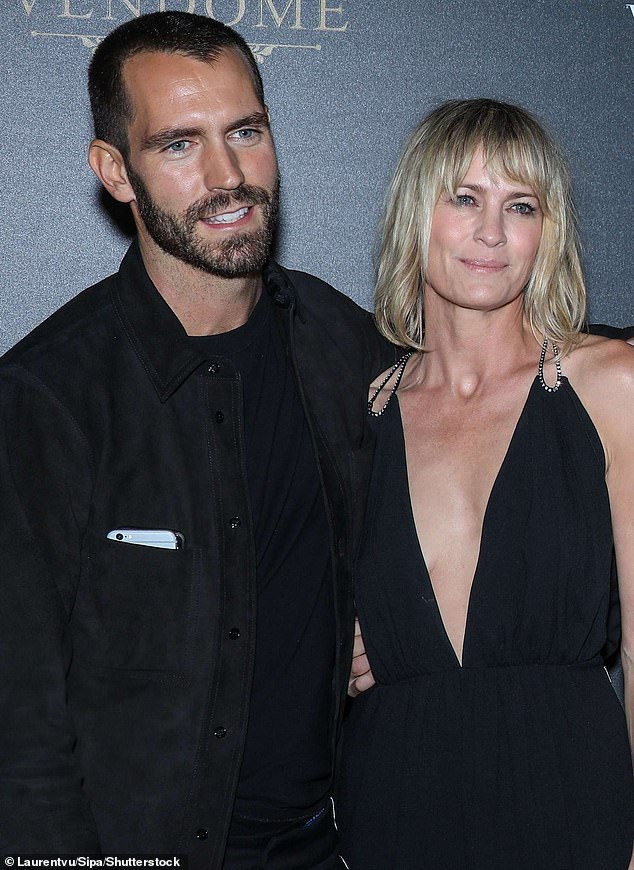 Single again: Both of them recently saw their latest marriages collapse, with Robin filing for divorce from her smoldering third husband Clément Giraudet in September; pictured 2017

‘We did a COVID wedding. By that I mean it was a county commissioner on Zoom, and we were at the house,’ Sean revealed.

‘There is no shame in my saying that we all want to be loved by someone. As I look back over my life in romance, I don’t feel I’ve ever had that,’ he said in 2012. 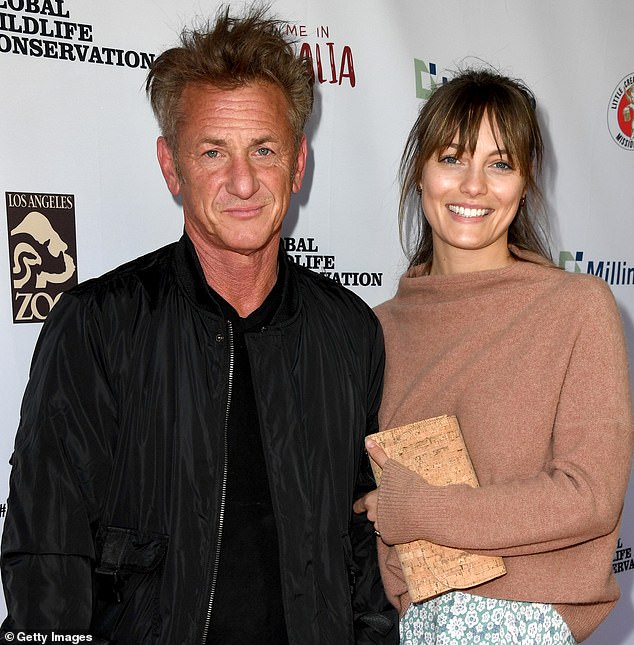 Meanwhile: Last April Sean finalized his divorce from his latest wife Leila George, who at 30 is younger than his daughter Dylan

‘I have been the only one that was unaware of the fraud in a few of these circumstances blindly. When you get divorced, all the truths that come out, you sit there and you go, What the f*** was I doing? What was I doing believing that this person was invested in this way?’ Sean told Esquire.

‘Which is a fantastically strong humiliation in the best sense. It can make somebody very bitter and very hard and closed off, but I find it does the opposite to me.’

Robin, on her end, told the Telegraph: ‘Divorce in and of itself, and with children, is devastating. Worse than that.’

She explained: ‘One of the reasons why we got back together and broke up so much was trying to keep the family together. If you’ve got kids, it’s a family, and you try again, and you try again. We did that for a long time.’

COVID-19 Testing and Travel: All You Need to Know

Is the pandemic over yet? Nobody knows. However, does that mean one can travel without restrictions and COVID-19 guidelines? Not really. As the pandemic has...
Read more

Criminal Defense Lawyer – Fine Tips to Pick the Right One!

The True Cost of Upgrading Your Phone

Game designing is a professional specialization involving research and analysis of the target audience, their preferences, socio-cultural environment & habits along with market trends...
Read more

People occasionally take a break to escape their reality for a bit because of the stress in the world and its relationship with a tiring life.
Read more
Business

When your business starts to branch out and gains more international recognition, one of the first things you should do is ensure that you...
Read more