By Brian Gallagher For Dailymail.com

Sam Asghari has denied that his wife Britney Spears had ‘manic meltdown’ while out at a restaurant, writing to his Instagram Story on Sunday: ‘Don’t believe what you read online people.’

The 41-year-old singer had reportedly been seen ‘talking gibberish‘ when fans tried to take photos of her dining with Sam, 28,  Ashgari at the JOEY restaurant in Woodland Hills on Friday, before he appeared to storm out, TMZ initially reported.

However, Sam also spoke to a photographer on Sunday and explained that his wife was just ‘frustrated’ that fans were trying to take their picture while they were having dinner.

‘People get a little too excited to see my wife so everybody is filming, doing their thing,’ he explained. ‘But you know how it is, fame comes with the territory and I went to get the car to get the hell out of there, and people just thought I’d left, but that didn’t happen. So it is what it is man.’ 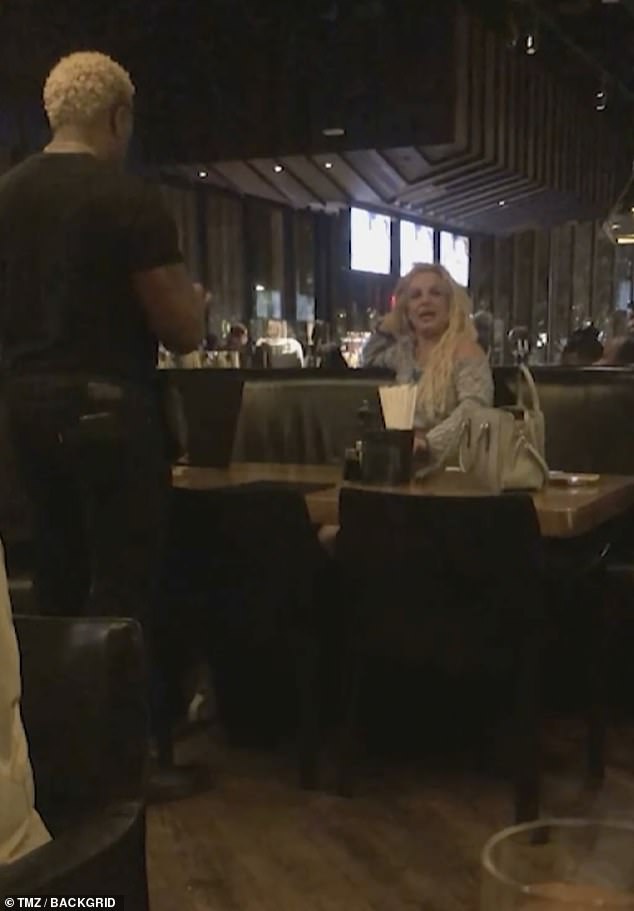 Didn’t happen? Sam Asghari has denied that Britney Spears had ‘ manic meltdown’ at restaurant – after pop star admitted she was ‘a little drunk and ‘looking like Shrek’

Asked if Britney – whose conservatorship was terminated last year – had felt frustrated by the situation, Sam added: ‘Yes, exactly – she felt frustrated and disrespected.’

Britney herself appeared to reference the drama in a post on Sunday saying that she had been a ‘little drunk.’

She followed up the concerning episode by posting a video of her flipping off the camera in a video set to Divinyls’ I Touch Myself.

Explaining the incident in another post she wrote: ‘I watched ‘NATURAL BORN KILLERS’ this morning and damn I got ENLIGHTENED … and HOLY SMOKES S**T BALLS. 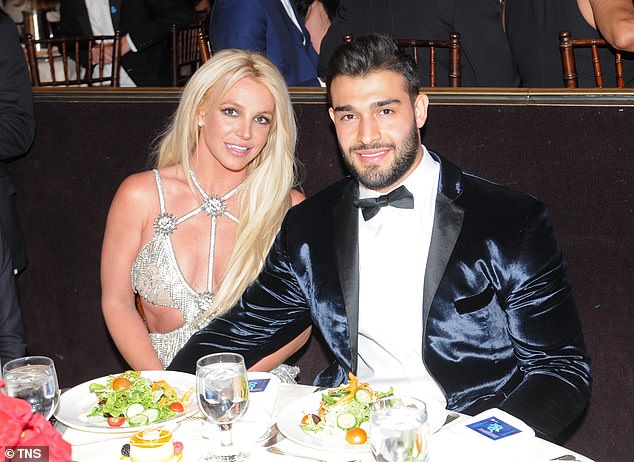 Disrupted dinner: Sam says his wife just became ‘frustrated’ when people approached to take her picture (the pair pictured above in 2018) 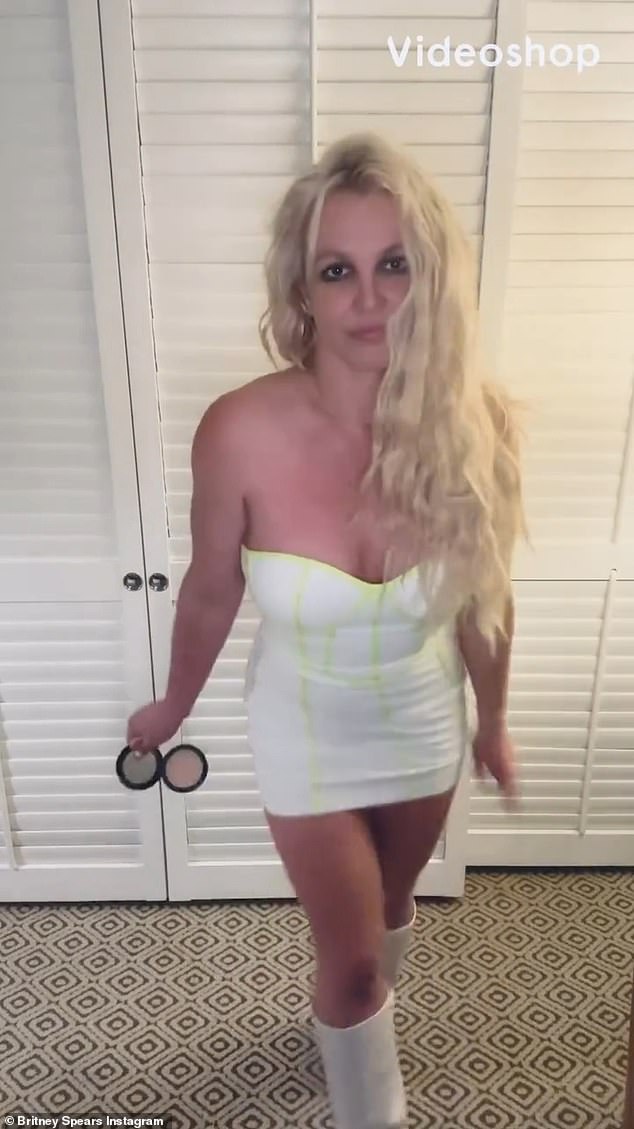 Responded: After a reported ‘manic episode’ in a Los Angeles restaurant and a strange video where she flipped off the camera in a video set to Divinyls’ I Touch Myself, Britney Spears responded in a bizarre new Instagram post.

‘I’m sure I brought a billion SMILES to me LOOKING LIKE SHREK at a restaurant. Even my best friend couldn’t WAIT TO SEND IT TO ME, THEY DON’T THINK TWICE because we are all natural born killers,’ Spears added.

‘I know the news is all hyped about me being a little drunk at a restaurant … it’s like they’ll be WATCHING MY EVERY MOVE !!!’ Spears continued.

‘I’m so flattered they talk about me like a maniac THEN have the balls to talk about all the negative things that happened in my past !!!’ she said.

‘Honestly it would be safer for me to compliment this world and f**k up because if I become a prophet and don’t create history, we might have something y’all… I’m just KIDDING, but it’s a good thought,’ Spears added.

‘I know y’all are rooting for me and all and make sure you check out the shocking Shrek picture of me,’ she added. 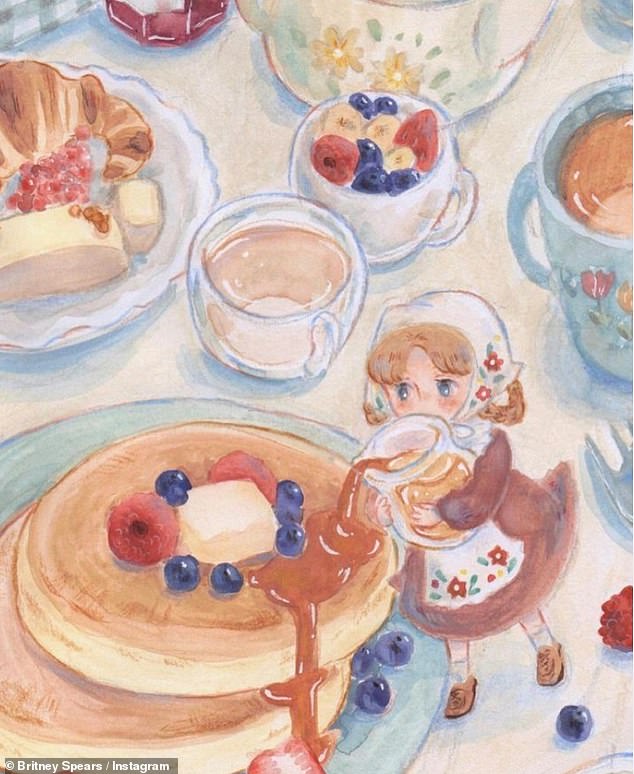 Bizarre: The 41-year-old singer shared an illustration of a tiny girl pouring syrup on pancakes which included a strange caption that addressed the supposed meltdown 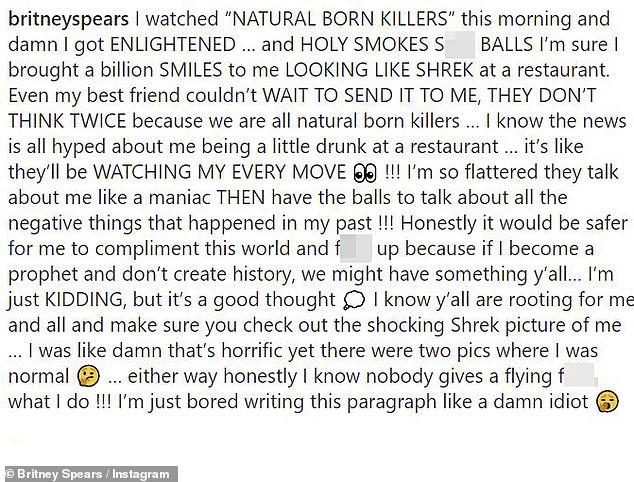 Watched: ‘I watched ‘NATURAL BORN KILLERS’ this morning and damn I got ENLIGHTENED … and HOLY SMOKES S**T BALLS,’ Spears began

‘I was like damn that’s horrific yet there were two pics where I was normal … either way honestly I know nobody gives a flying f**k what I do !!! I’m just bored writing this paragraph like a damn idiot,’ Spears concluded.

The Piece of Me singer was apparently triggered when restaurant patrons whipped out their cell phones and began snapping unwarranted photos and videos of her.

Footage obtained by the outlet shows Britney trying to cover her face with a menu to keep prying eyes at bay.

Eyewitnesses allege the Grammy winner became increasingly upset and began ‘yelling’ and speaking in gibberish, which prompted her spouse to storm out.

The former Disney star left the venue a few moments later with her bodyguard, who returned to pay the bill. 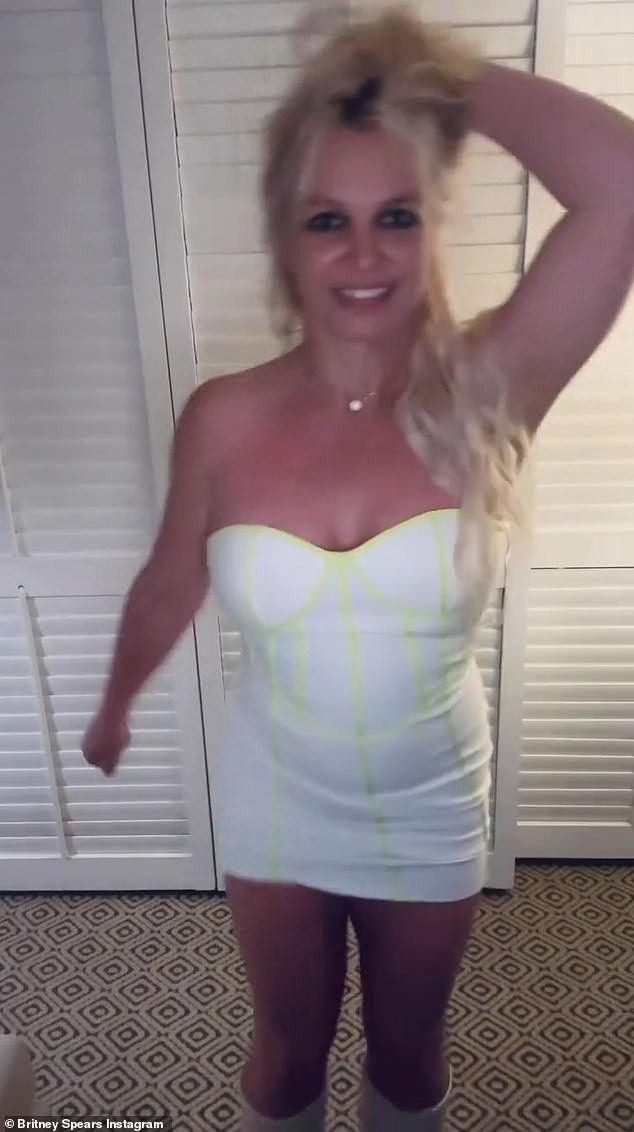 Flattered: ‘I’m so flattered they talk about me like a maniac THEN have the balls to talk about all the negative things that happened in my past !!!’ she said

Tax changes would boost IRS monitoring of cryptocurrency use

The Biden administration is taking steps to ensure Americans who pay for goods or services with cryptocurrencies don't sidestep the tax man.The Treasury...
Read more

NASA Mars Ingenuity helicopter bounces back after anomaly for flight 14

Several states/UTs in the country are now under lockdown, while strict Covid-19 restrictions are in place in other areas.Covid-19 India Live Update, Coronavirus...
Read more

Are you looking for the best industrial suppliers for wave springs? Look no further! In this blog post, we'll cover where to find the...
Read more
Business

During exhibitions or any such events, several businesses try to exhibit their various products as well as services.  You will find that custom printed bags...
Read more
Business

Business, finance, and the modern economy are all irrevocably impacted by technology. The tech industry is changing the way we live, work, and relate...
Read more