Priyanka Chopra spent part of her Saturday doing some beauty primping, which she documented with a couple of photos on her Instagram page.

For the first picture, the actress, 40 – who recently celebrated her daughter Malti’s first birthday – wore a black mask from the world-renowned skincare line 111 Skin to help get her glowing complexion.

‘Self love,’ the star captioned the photo that showed her with nearly her entire face covered by the mask, all while flaunting her midriff in a casual and sporty ensemble. 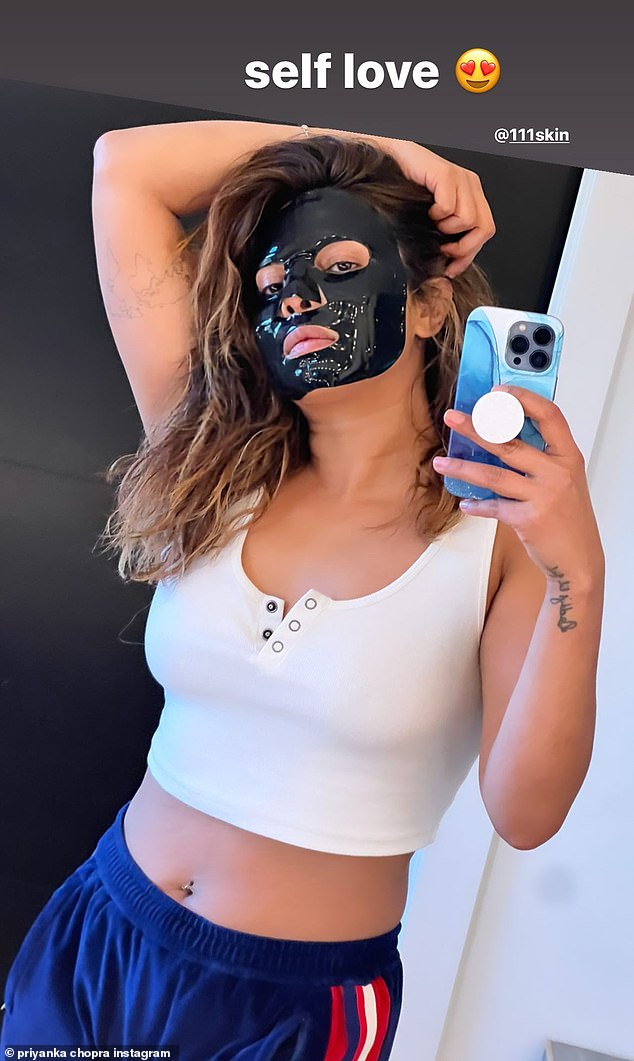 Beauty preps: Priyanka Chopra, 40, spent part of her Saturday doing one of her beauty routines that included using a black mask from 111 Skin to help keep her glowing complexion

Chopra can be seen in the photo with her right arm lifted up and leaning on the top of her head, as she held the camera with her other hand next to her face for the mirror selfie.

The former Quantico star went with a casual and sporty look in dark blue sweatpants with red, white, and blue stripes down the side of each leg.

She also donning a white crop top that allowed her to showcase her cleavage, midriff and belly button ring.

Despite being the middle of one of her beauty routines, the mother of one-year-old daughter Malti, whom she shares with husband Nick Jonas, had her highlighted brown locks flowing down past her shoulders with a side part and added volume. 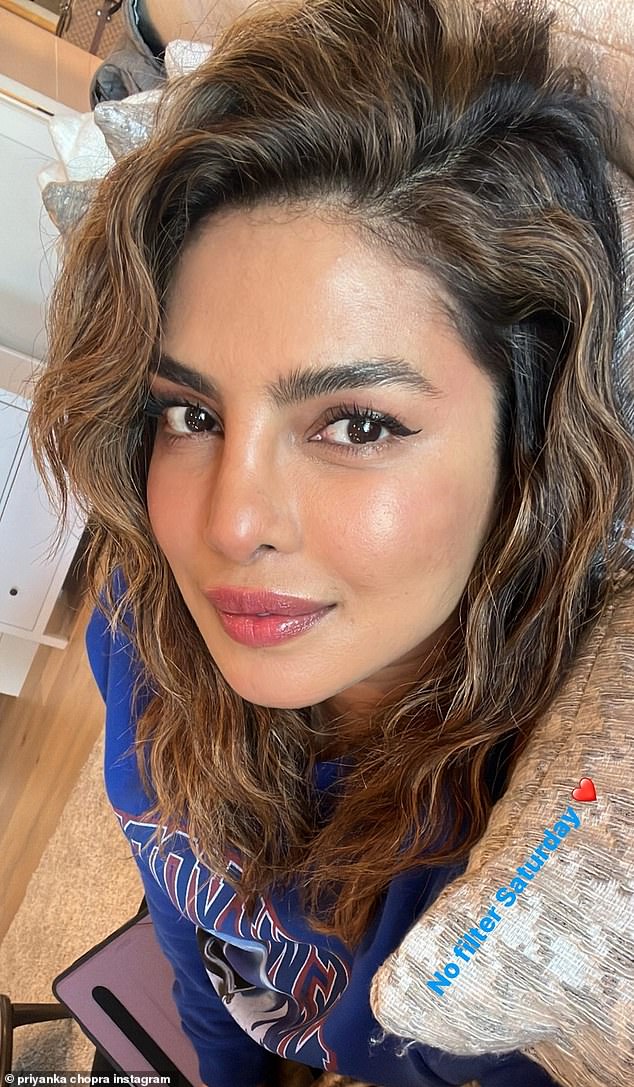 Glowing: The actress and producer also highlighted her complexion in a second photo that she caption: ‘No filter Saturday’

In the second selfie snap, Chopra seemingly showed off the results of her mask procedure, which included adding her touches of makeup.

She confessed it was her ‘no filter Saturday,’ in the caption of the image, along with a red heart emoji.

The Jharkhand, India native looked up at the camera as she held it over her head while leaning against a sofa in what looks to be the living room of her home.

This time around she wore a blue sweatshirt and had her tresses falling all around the frame of her face with that same left side part. 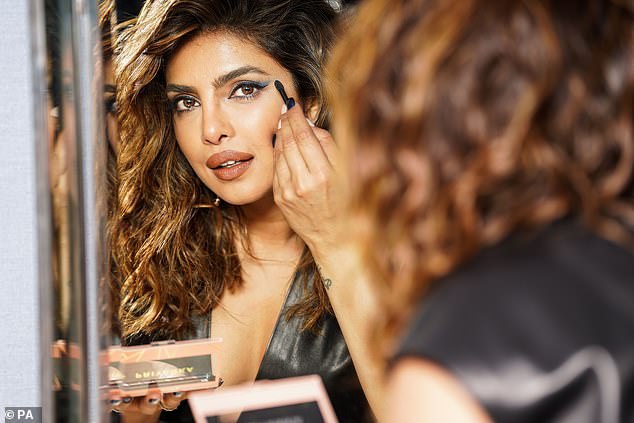 Glowing: The actress also flaunted her striking features and flawless complexion when she launched her Universal Colour Collection campaign with Max Factor this week

Chic: As part of the promotional push for the Max Factor launch, Chopra attended a launch event at Superdrug in London, England on January 10

Earlier this week, Chopra showcased her striking features and glowing complexion when she launched her campaign with Max Factor dubbed, Universal Colour Collection.

In some of the images she’s seen applying makeup to her face and eyes in front of a mirror.

She can be sen wearing bold blue eyeliner, a light pink lip and bronzed cheeks as part of the promotional push. 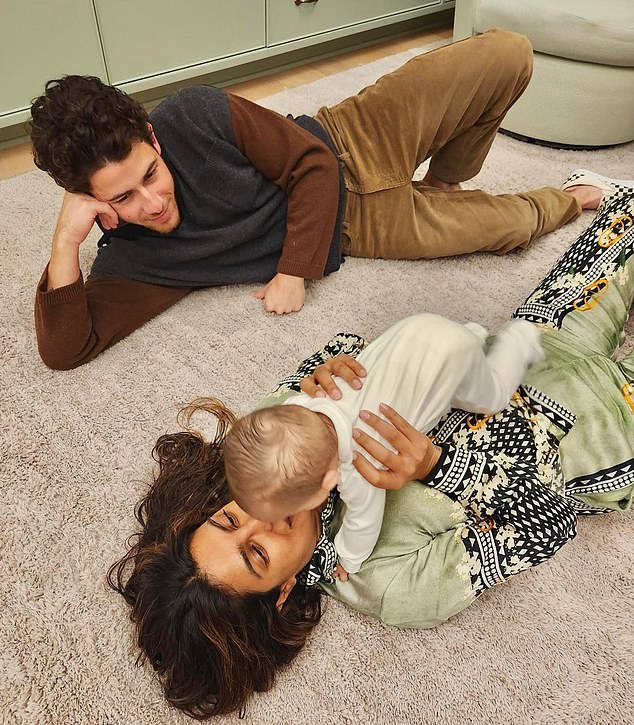 Family matters: As revealed by DailyMail.com last January, the couple’s surrogate gave birth 12 weeks early at a Los Angeles hospital where Malti stayed until she was healthy enough to return home with her parents in May; the trio are seen in an Instagram post from November

Chopra and Jonas also celebrated their daughter’s first birthday, which actually fell on January 15, with a party the previous weekend.

As revealed by DailyMail.com last January, the couple’s surrogate gave birth 12 weeks early at a Los Angeles hospital, resulting in Malti spending her first 100 days in the NICU.

After more than three months at the hospital, Malti Marie finally made it home just in time for Mother’s Day 2022, which fell on Sunday, May 8, last year.

The couple had been dating about seven months when they got married in December 2018, which was just over three years before Malti’s arrival. 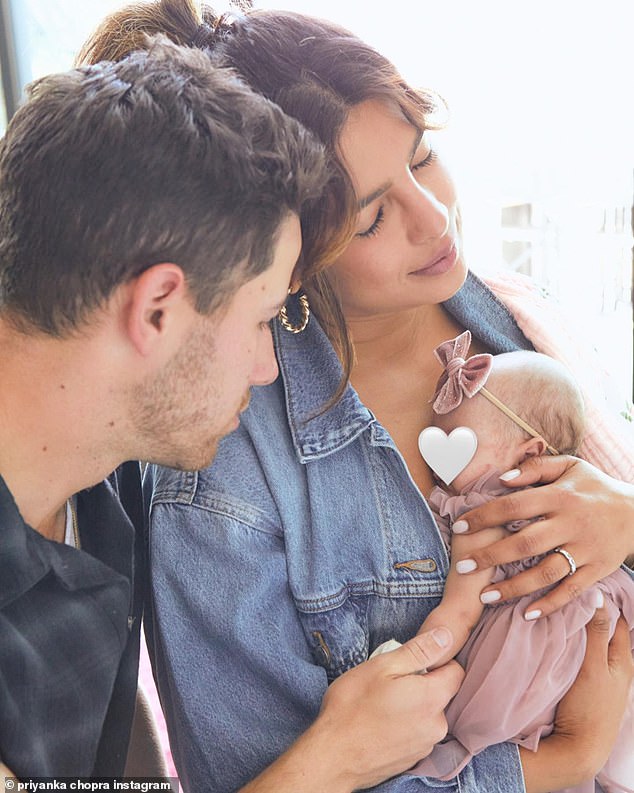 Sweet: ‘After 100 plus days in the NICU, our little girl is finally home,’ Jonas wrote in a candid Instagram post last May

You're a responsible homeowner enough to realize that you'll need to pay someone to assist you to fix a few things now and again...
Read more

When you're renovating an older home, it's important to consider the ADA compliance of your new fixtures. There are many options for sinks in...
Read more

The Benefits of Cloud Computing For Your Business

Getting the right information to your staff is vital for the success of your company. However, this can be a challenge if your employees...
Read more

Are you sick and tired of wondering: will DVC retail prices go down? If so, take a look at everything you need to know...
Read more
Business

According to Beximco Group, the tablet has been effective for reducing conditions that can cause extreme risks in COVID-19 patients. Interestingly, the effectiveness of the tablet is as much as 90 percent.
Read more
Business

What is the Best Free PDF Software？| UPDF

Are you in need of a PDF tool to edit your PDF files professionally? Do you want to use a free PDF maker for...
Read more