She’s expecting her first baby with boyfriend Sam Rason and is due to give birth on March 5, 2023.

And Amy Hart has revealed why she doesn’t want Sam to propose to her while she’s pregnant.

The Love Island star, 30, who is in her third trimester, took to Instagram on Tuesday to reveal the couple have already planned out their wedding. 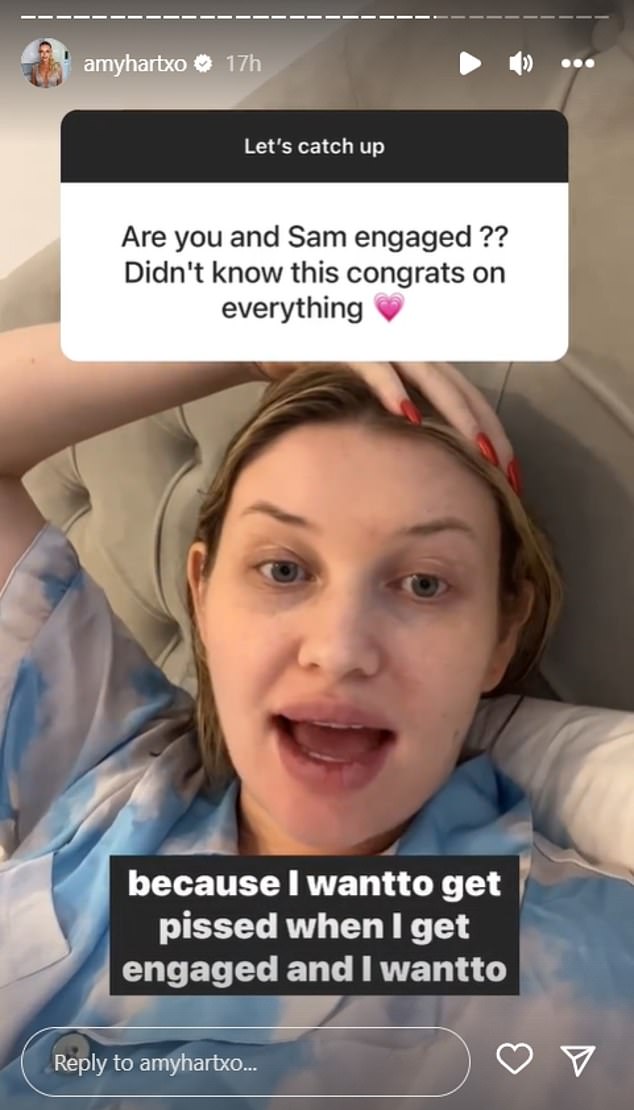 She explained that she was to blame for Sam not popping the question, as she wanted to be able to get ‘p***ed’ after getting engaged.

In a fan Q&A, Amy was asked if her and Sam were engaged yet and she replied: ‘No, but that is my doing.

She went on: ‘But we know when and where we’re getting married. And everyone’s like aw that ruins the surprise. It doesn’t. 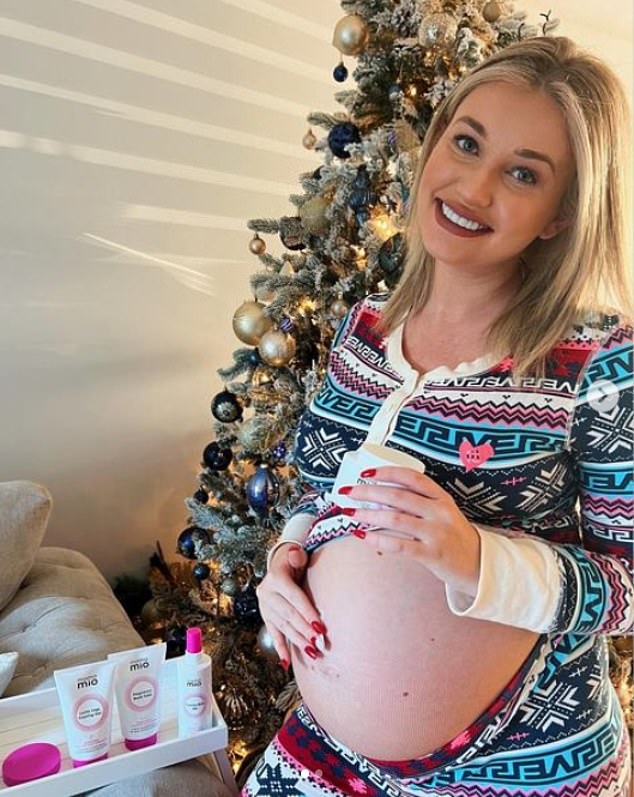 Planned ahead: The Love Island star, 30, who is in her third trimester, took to Instagram on Tuesday to reveal the couple have already planned out their wedding

‘I feel like if I didn’t know we were going to married, having a baby together and living together, knowing each other are the one – I feel like that would be a bit worrying. A little bit worrying.’

Elsewhere in the Q&A, Amy was asked about her mood during her pregnancy and explained: ‘Sometimes I feel a bit sad. 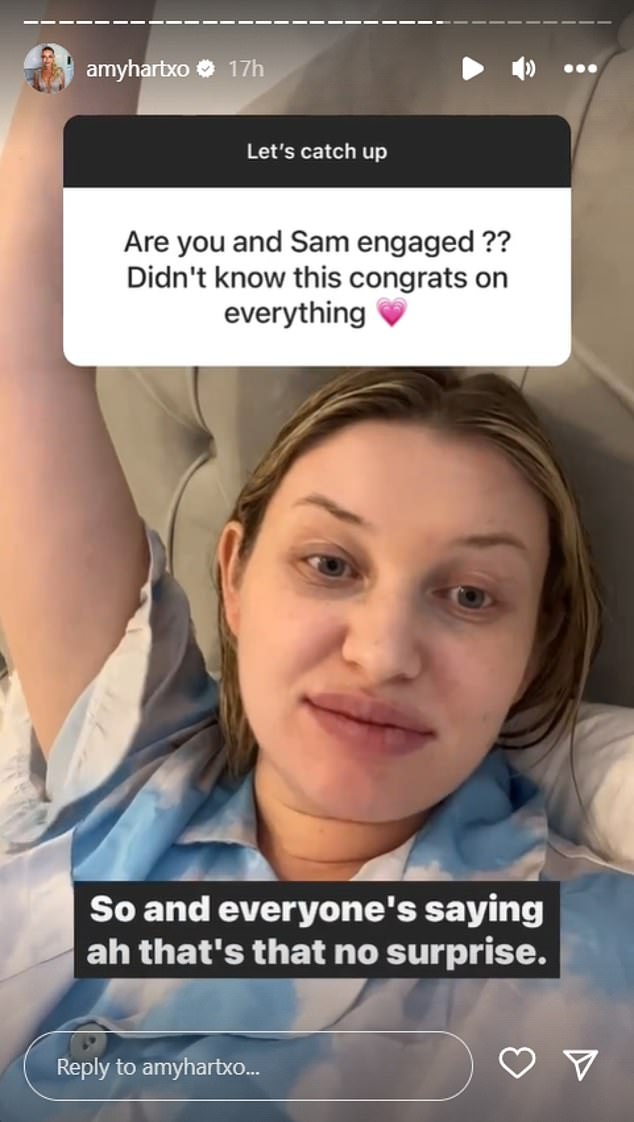 She explained that she was to blame for Sam not popping the question, as she wanted to be able to get ‘p***ed’ after getting engaged.

‘When I did my egg freezing I wasn’t that bad and like I don’t get proper aggy on my period. I just feel sad in my chest sometimes.’

The candidness come after Amy shared a series of stunning images of her bump so far on Instagram last month.

She also detailed the ‘excruciating pain’ she has been experiencing in her hip and cravings she has been feeling so far. 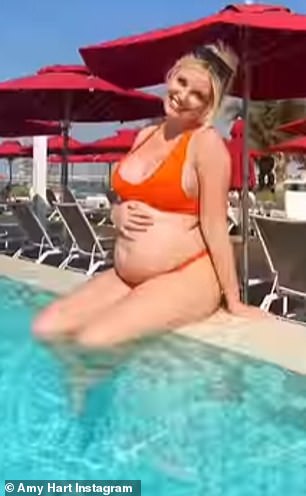 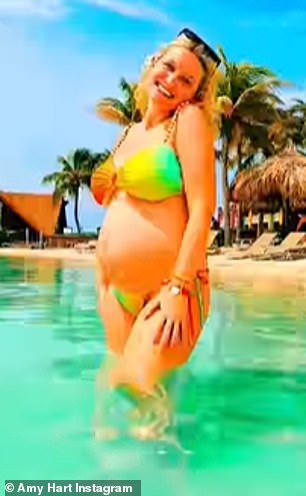 ‘Goodbye second trimester’: Amy shared a series of photos of her bump on Instagram earlier this month as she detailed ‘excruciating pain’ and cravings she’s enduring 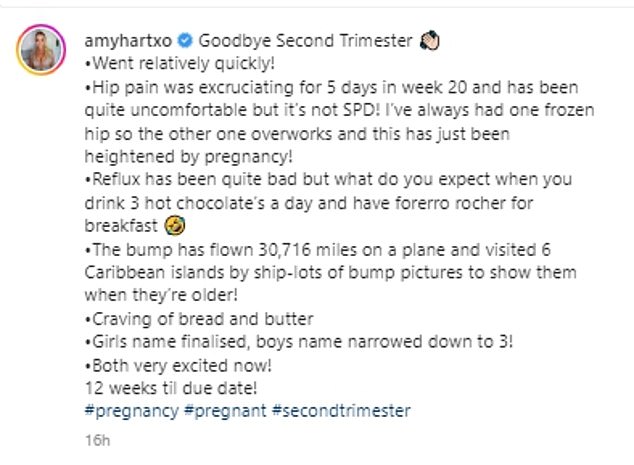 Revealing all: She wrote this lengthy caption alongside her latest reel

Marking the milestone in her pregnancy, she wrote in the caption: ‘Goodbye Second Trimester.

‘Went relatively quickly! Hip pain was excruciating for 5 days in week 20 and has been quite uncomfortable but it’s not SPD! I’ve always had one frozen hip so the other one overworks and this has just been heightened by pregnancy!

‘Reflux has been quite bad but what do you expect when you drink 3 hot chocolate’s a day and have forerro rocher for breakfast. [sic].

She continued: ‘The bump has flown 30,716 miles on a plane and visited 6 Caribbean islands by ship-lots of bump pictures to show them when they’re older! 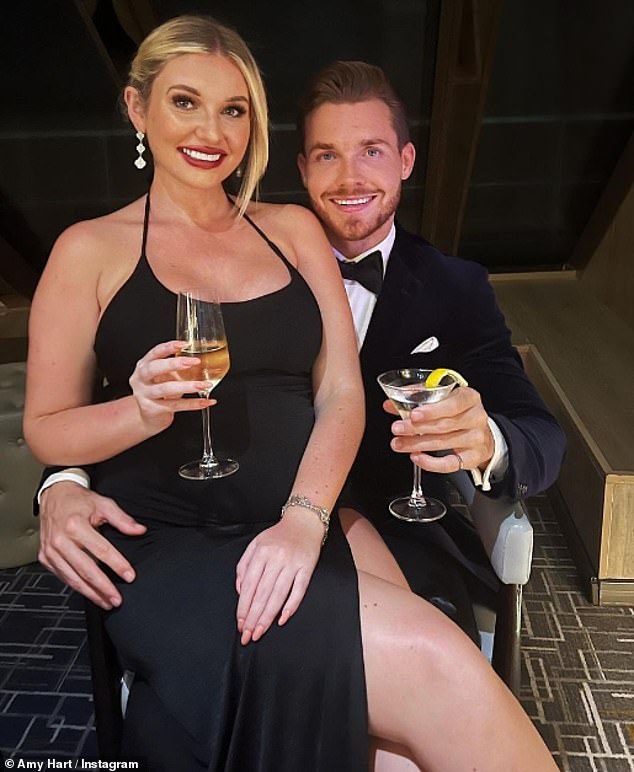 Cute: This is Amy’s first child with boyfriend Sam Rason

‘Craving of bread and butter. Girls name finalised, boys name narrowed down to 3. Both very excited now! 12 weeks til due date!’

Last month Amy admitted that she was feeling ‘deflated’ ahead of her 20-week scan, because she wants her baby to be born sooner.

Amy wrote: ’20 weeks of growing a human!! I’ll be honest (as I always strive to be..) as much as this mornings scan was amazing, we saw so much (but covered our eyes at the right times so we didn’t see the gender!)

‘I feel a little bit deflated this evening…but for all the right reasons! This last week I’ve been so so excited, the most excited I’ve been the whole time but I feel like I’ve been pregnant for aaaaggeess now and I’ve got to do the whole thing again and I just wanna have the baby here nowwww!!! (Veruca Salt vibes ✌).’

Amy added that she will be keeping busy and has booked herself onto a variety of courses until the baby arrives.

She said: ‘I’ve just booked our NCT course, hypnobirthing and paediatric first aid courses so hopefully that’ll make some time go faster!! Has anyone else felt like this or am I an ungrateful weirdo?’

Back in August, Amy revealed she is expecting her first baby, taking to Loose Women to share the good news.

The announcement came just months after she spoke about her decision to freeze her eggs. 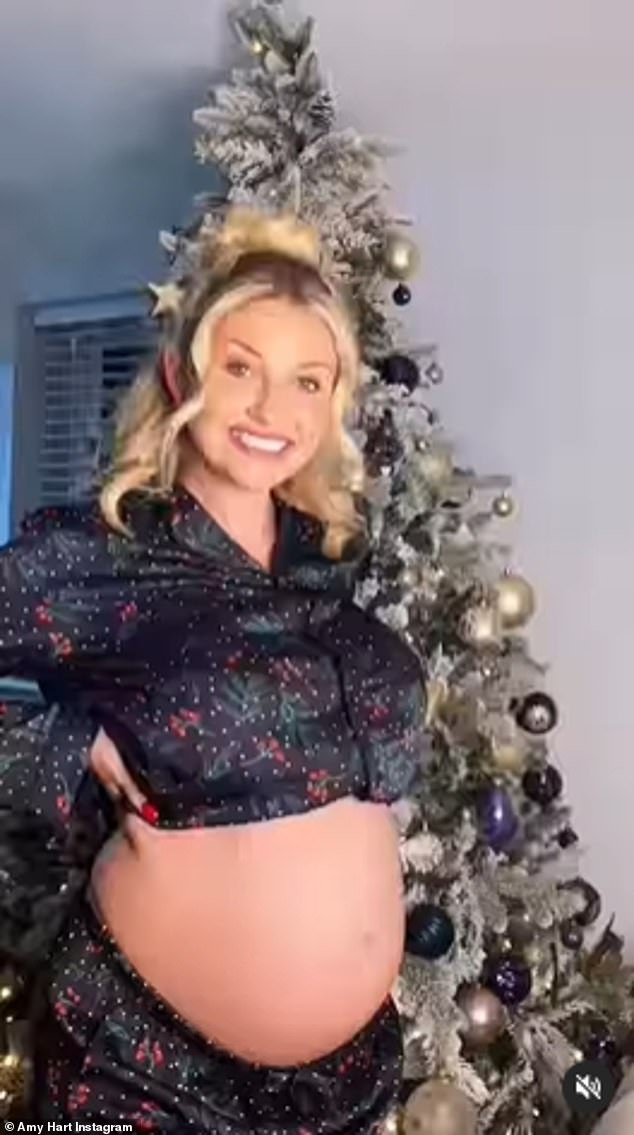 More to come: Amy added that she will be keeping busy and has booked herself onto a variety of courses until the baby arrives

Stock Vs Forex Vs Crypto: Which One to Choose?

Investing is no walk in the park. It requires deep knowledge and understanding of how the markets work. Someone new to the whole investment...
Read more

Margot Robbie's stylist Kate Young has come under fire again after the star wore a version of a classic Versace number to the...
Read more

The State not only has rich Buddhist heritage and culture, it is also dotted with large and small Buddhist caves.To be observed on...
Read more

Some Reasons Why Entrümpelung Services for Companies Near Me Are Important?

Are you a small business owner or planning to start your new venture? Have you been struggling with gathering adequate funds lately? Maybe, it...
Read more
Marketing & Sales

The Benefits of Filing for Disability in California

The state of California has a number of programs in place that are designed to aid those who might struggle with the modern cost...
Read more