Alicia Silverstone, 46, channels her Clueless character Cher as she...

Ireland Baldwin reveals the ‘classy’  name she selected for her...

Michelle Heaton and Sarah Jayne Dunn look incredible as they...

Michelle Heaton and Sarah Jayne Dunn looked incredible as they attended a special screening of Magic Mike's Last Dance at the Picturehouse in...
Read more
Entertainment

The singer, 64, made the news known with a very raunchy video, which saw her snog Jack Black, challenge Amy Schumer to emulate a sex act while Diplo flashed her pals.

She will hit the road this July as part of The Celebration Tour, the first to celebrate four decades of music and her greatest hits. 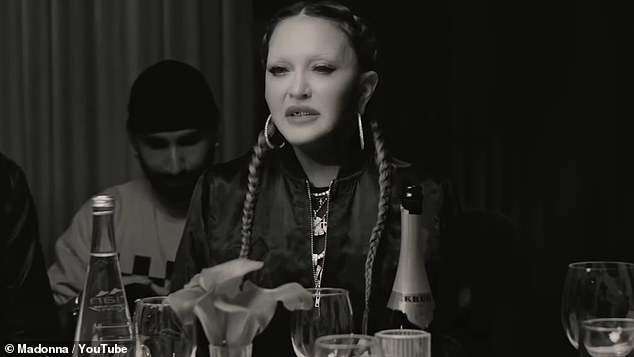 Shocking: Madonna has announced a 40th anniversary Celebration Tour with a VERY raunchy video – where she snogged Jack Black, challenged Amy Schumer to emulate a sex act while Diplo flashed her pals

Kicking things off in Vancouver, Madonna will visit multiple cities in the Unites States and Canada, as well as the United Kingdom and Europe.

She confirmed the 35-city string of gigs in an iconic viral video with a wink to her groundbreaking film Truth or Dare.

The video featured other notable names such as Judd Apatow, Lil Wayne, Bob The Drag Queen, Kate Berlant, Larry Owens, Meg Stalter, Eric Andre and culminates with Amy daring the superstar to go on tour and perform her four decades of mega hits. 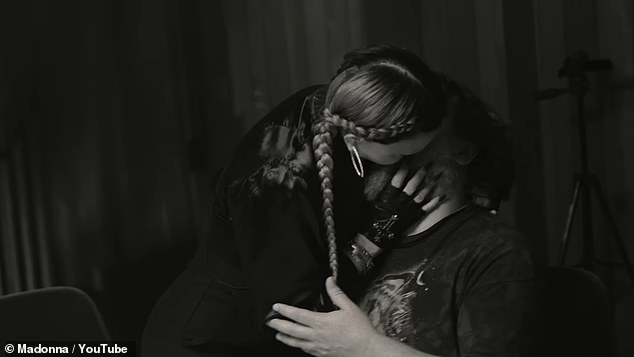 Produced by Live Nation, the tour will kick off in North America on July 15th at Rogers Arena in Vancouver, BC with stops in Detroit, Chicago, New York, Miami, Los Angeles.

She will then make her way to Europe where she will hit 11 cities throughout the fall, including London on October 24th, continuing onto Barcelona, Paris, and Stockholm, among others.

The Celebration Tour will wrap in Amsterdam, NL on Friday, December 1st at Ziggo Dome.

The shows will take audiences on Madonna’s artistic journey through four decades and pay respect to the city of New York where her career in music began.

Madonna said: ‘I am excited to explore as many songs as possible in hopes to give my fans the show they have been waiting for.’

The Celebration Tour will offer a one-of-a-kind experience with special guest Bob the Drag Queen a.k.a. Caldwell Tidicue across all dates on the global tour.

It had previously been reported Madonna was planning her first ever Greatest Hits tour. 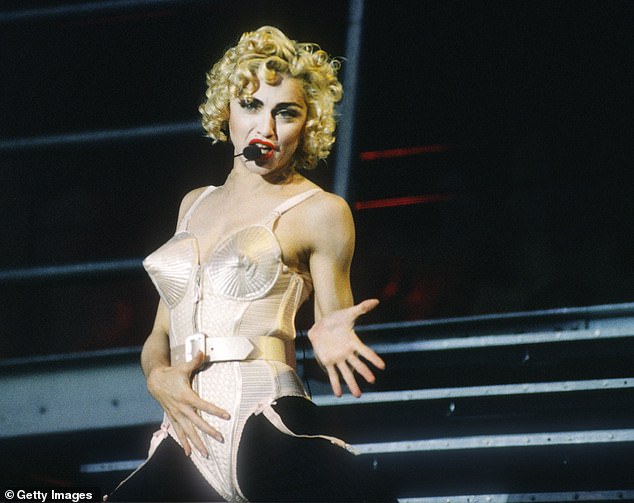 At last! Madonna is reportedly planning her first ever Greatest Hits tour, with multiple shows already booked for London’s O2 Arena (pictured during her Blonde Ambition tour in 1990)

A source told The Sun: ‘Madonna is trying something completely new — and really giving fans, young and old, what they want.

‘She wants to capitalise on tracks like Frozen and Material Girl popping off on TikTok, and introduce her back catalogue to an entirely new generation.

‘Previously she has always wanted to be forward-facing and focus on whatever new album she’s plugging. But now, in her mid-sixties, she is going back to basics and once again reinventing herself.’

It’s thought that the show’s will be ‘no-holds barred and suitably risqué’ as Madonna’s prior shows, with the star no stranger to raunchy displays on social media. 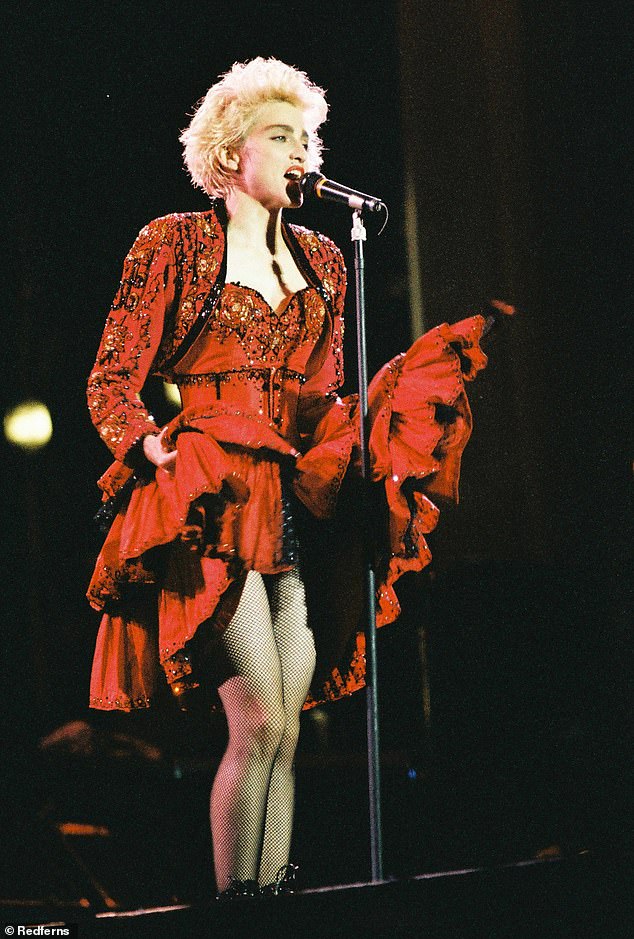 Iconic: The music icon is allegedly set to announce dates for a mammoth run of shows, after first performing in the UK in 1987, with her Who’s That Girl World Tour (pictured) 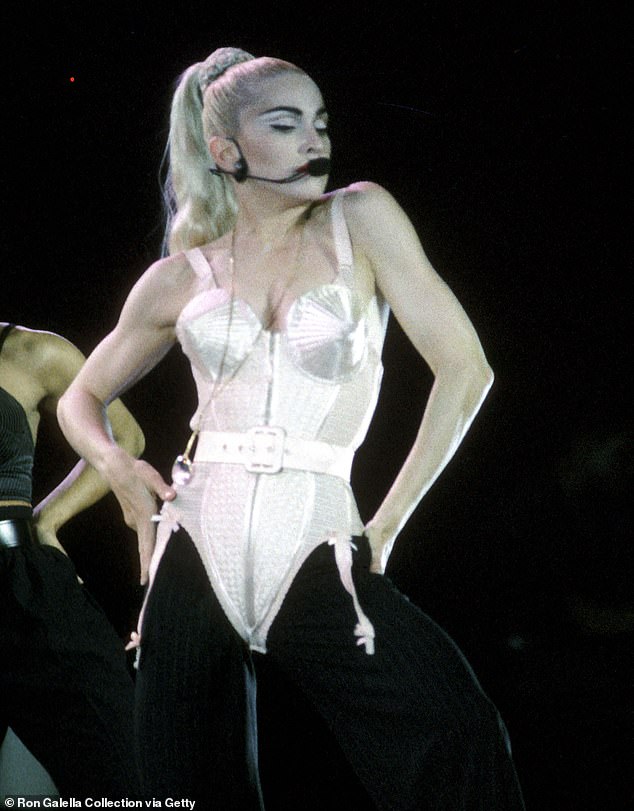 Famous look: It was during her 1990 Blonde Ambition tour that Madonna donned her now-iconic Jean Paul Gaultier conical bra during a sell-out show in Japan 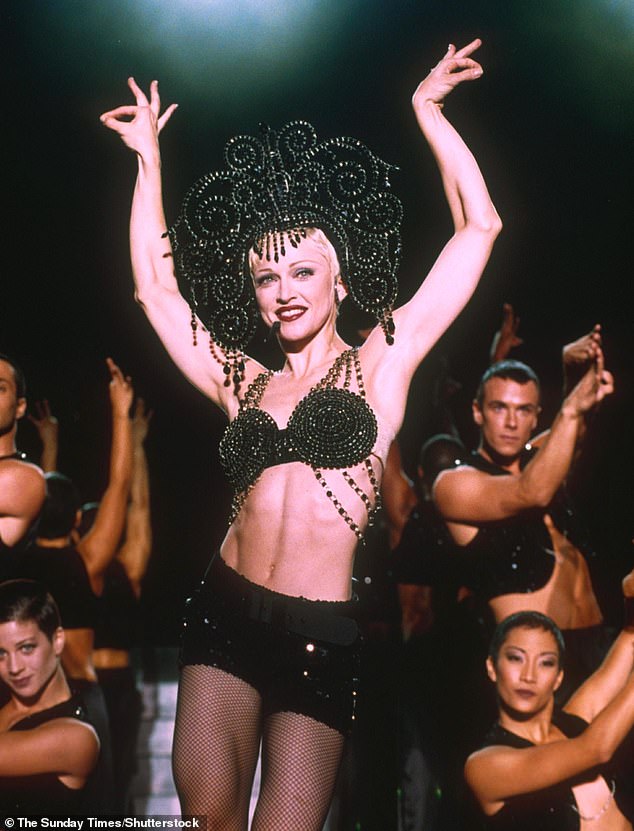 Racy! The hitmaker is no stranger to her revealing looks while performing on her tours around the world (pictured performing at Wembley Stadium during her Girlie Show Tour in 1993) 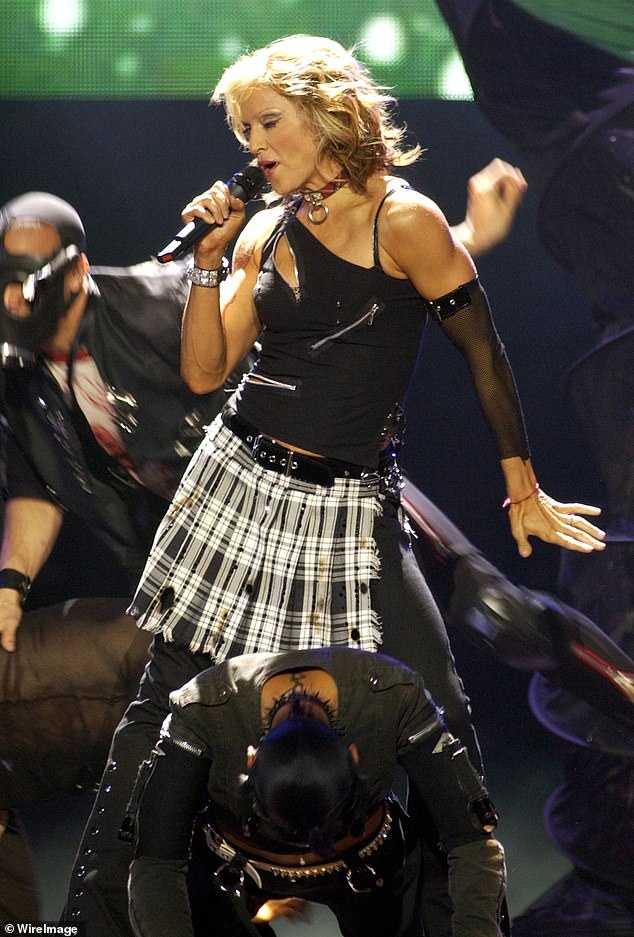 Stellar: In 2001, Madonna took to the road for her Drowned World Tour, her first run of shows in eight years

Madoona’s previous tour saw her perform at significantly smaller theatre venues, but for this Greatest Hits tour she is expected to take to the stage and huge stadiums.

Last year, Madonna hinted that she was ready to get back on the road and tour again, telling Variety: ‘I want to go on tour again, I’m a creature of the stage. That is my happy place.’

Madonna last took to the stage in London’s O2 Arena during her Rebel Heart tour in 2015, the same year she famously took a tumble during a performance at the BRIT Awards. 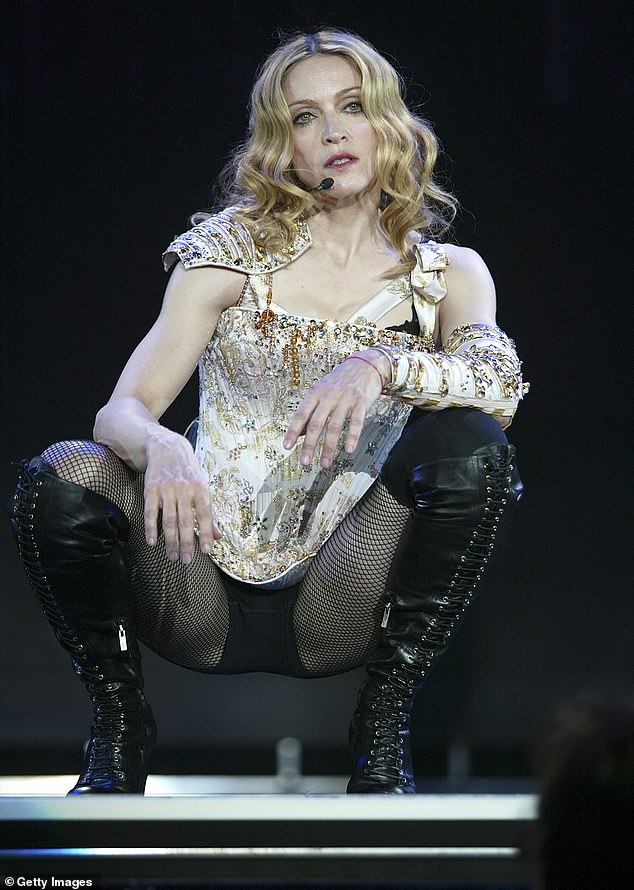 Changing it up! She then returned to the road in 2004 with her aptly-titled Re-Invention Tour 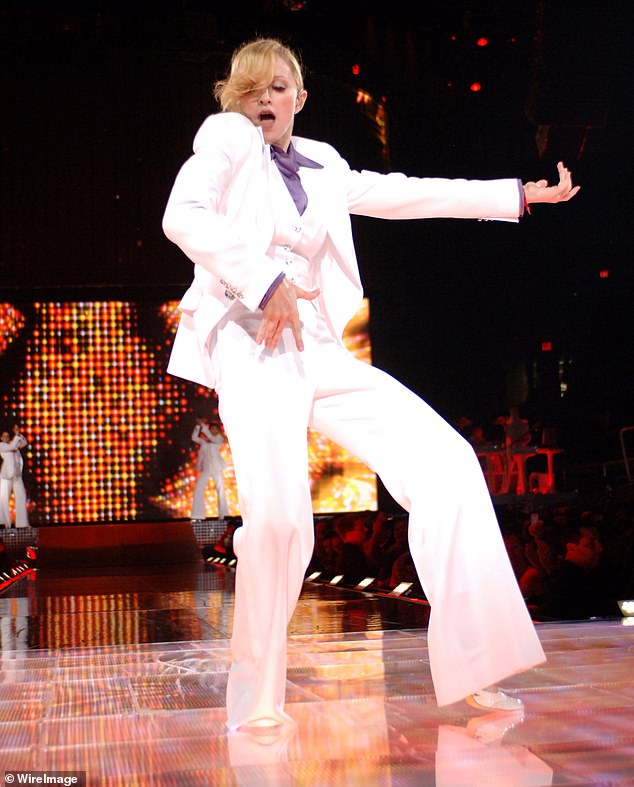 Commanding the stage! Madonna, no stranger to reinventing herself, performed on her Confessions tour in 2006 (pictured) 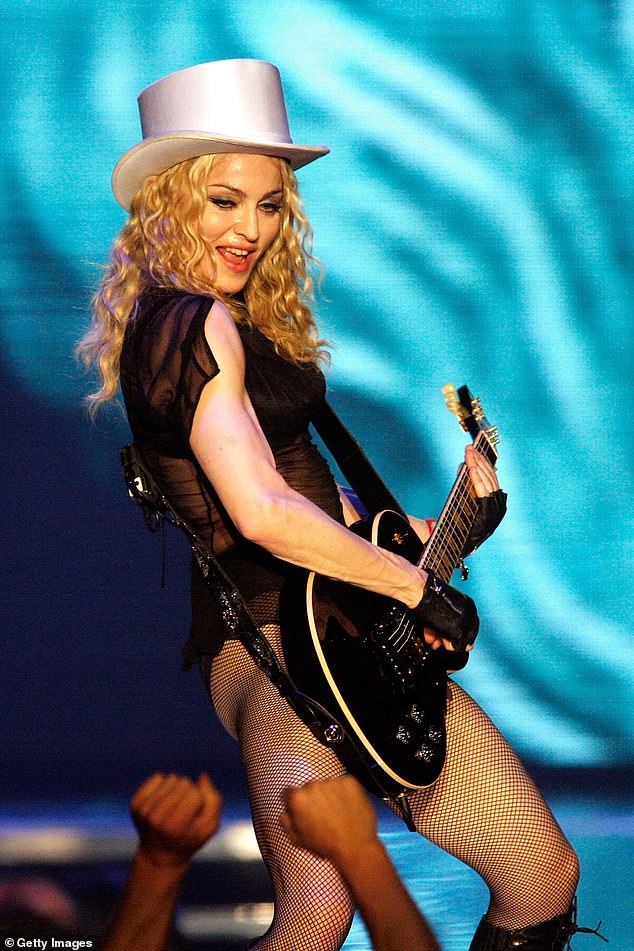 Sexy! In one of her raciest performances yet, Madonna toured the world with Sticky & Sweet in 2008 following the release of her album Hard Candy 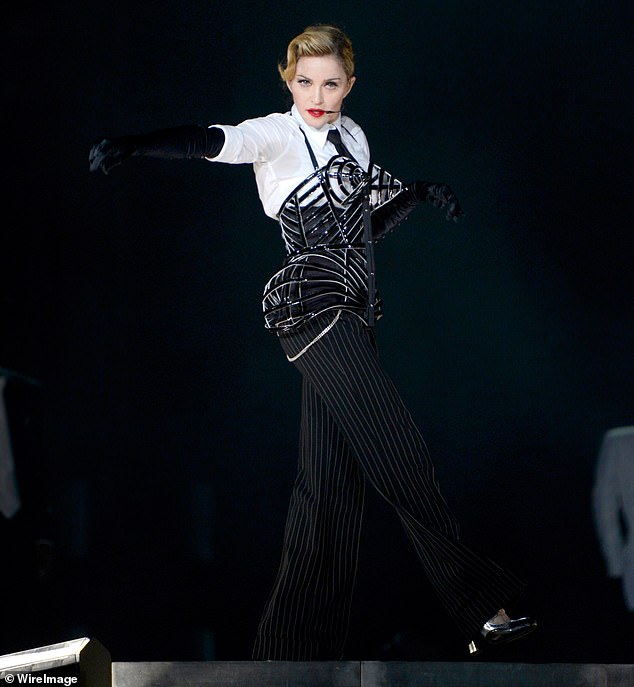 Blast from the past! During her MDNA tour in 2012, Madonna offered a sexy new twist of her iconic conical bra look (pictured) 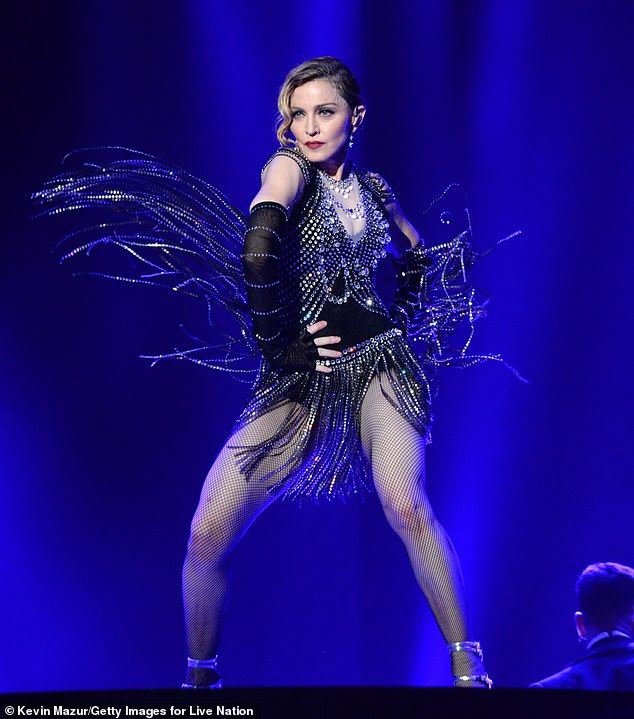 Stunner! Madonna last took to the stage in London’s O2 Arena during her Rebel Heart tour in 2015 (pictured)

While Madonna performed at 75 theatre venues during her Madame X tour, she was forced to cancel several shows due to recurring hip and knee injuries.

She first took to the road to tour around the UK in 1987, with her Who’s That Girl World Tour.

It was during that same tour that Madonna donned her now-iconic Jean Paul Gaultier conical bra during a sell-out show in Japan. 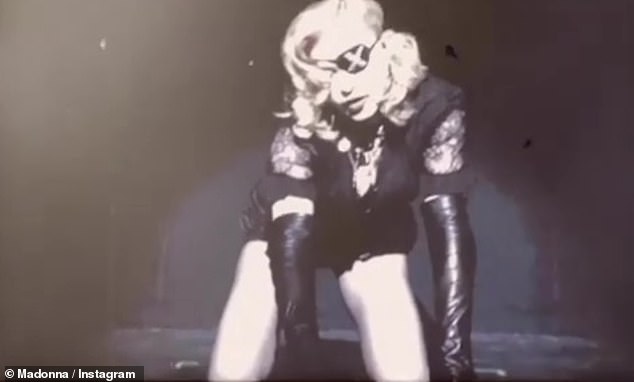 Well that’s new! Madonna performed at 75 theatre venues during her Madame X tour in 2019 and 202, but was forced to cancel several shows due to recurring hip and knee injuries 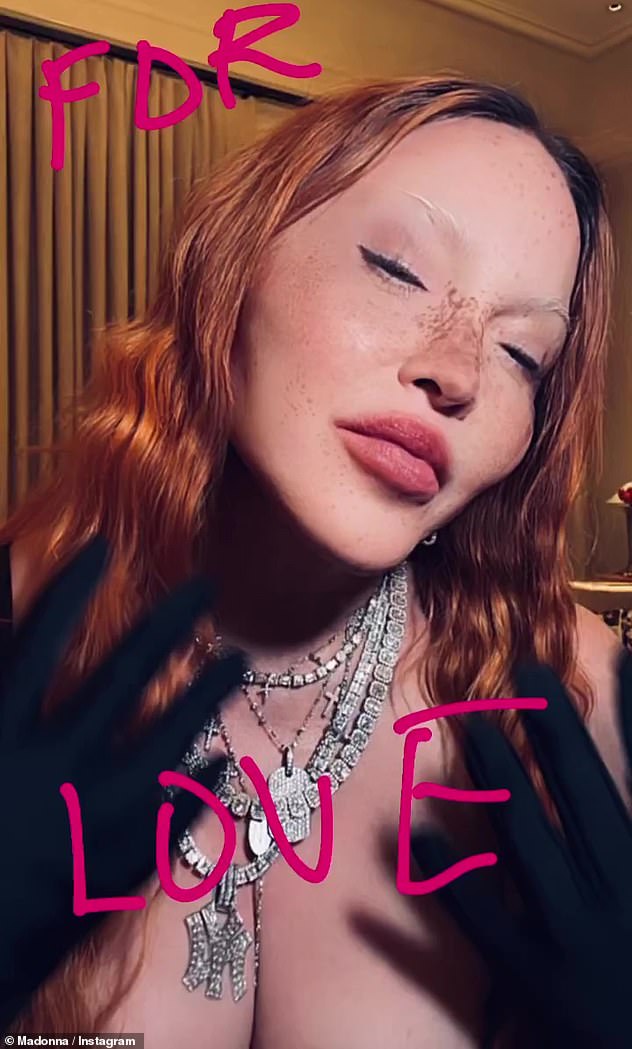 Wow: It comes after Madonna was scarcely recognisable in the latest racy offerings she uploaded to her Instagram page

In 2006 she also infuriated the Church of England by staging a mock crucifixion during her Confessions tour in LA.

It comes after Madonna was scarcely recognisable in the latest racy offerings she uploaded to her Instagram page.

She decked herself out in bondage gear including a busty sheer lace top and flounced around her bed, biting down seductively on a riding crop. 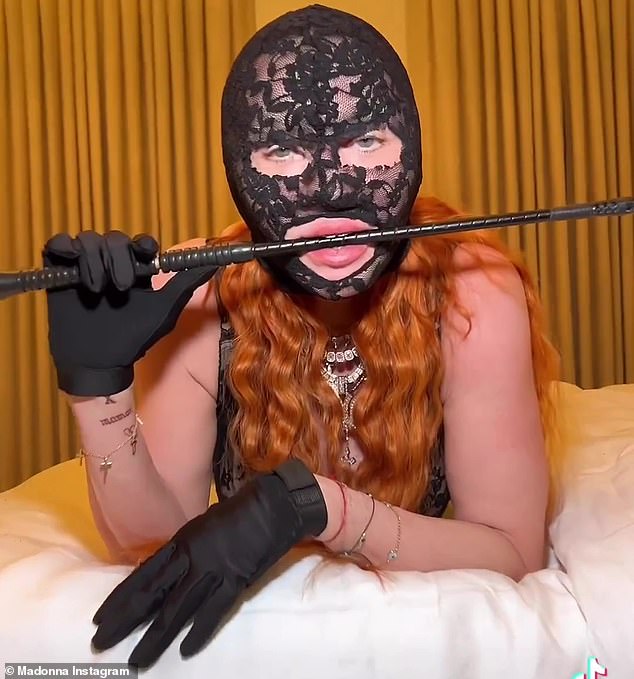 Raunchy: Keeping the riding crop in her mouth, she lolled on her bed as the Elvis Presley song Only You played in the background

Exploring the Art of Creativity

Stephen King described creativity as being the ability to look at the same things as anyone else but see them differently. Without creativity,...
Read more

In-House Development vs Outsourcing – What to Choose?

With the current ability to recruit from anywhere in the world, startups often think about how best to assemble a team. It’s always a...
Read more

Elizabeth Holmes is facing a 20-year prison sentence in the U.S. for allegedly defrauding $700 million from investors. The case of Theranos, et...
Read more

The leader of Northern Ireland’s biggest political party has agreed to step down, just three weeks after taking up the post, a dramatic...
Read more

Dinner Party Menu Ideas That Will Wow Your Guests

Are you planning a dinner party and looking for some inspiration? Well, you've come to the right place! In this blog post, you'll find...
Read more

Tips To Enhance Your Marketing Strategy For 2022

Marketing strategy is vital for every business. The marketing landscape evolves consistently, so there is a need to regularly change strategies. It makes sense...
Read more
Business

Business Blogging: Why Writing Is the Answer

There are more than 600,000 businesses in the United States each year. Unfortunately, not all of these companies succeed. To give yourself the best...
Read more
Business

Every person saw the candles at least once in his life. We are all familiar with the use of candles. People use candles for...
Read more

Ireland Baldwin reveals the ‘classy’  name she selected for her daughter

Michelle Heaton and Sarah Jayne Dunn looked incredible as they attended a special screening of Magic Mike's Last Dance at the Picturehouse in...
Read more