Margot Robbie‘s stylist Kate Young has come under fire again after the star wore a version of a classic Versace number to the Babylon premiere on Monday.

The Oscar-nominated actress, 32, returned to Sydney this week for the Australian premiere of the 1920s-themed Hollywood drama. 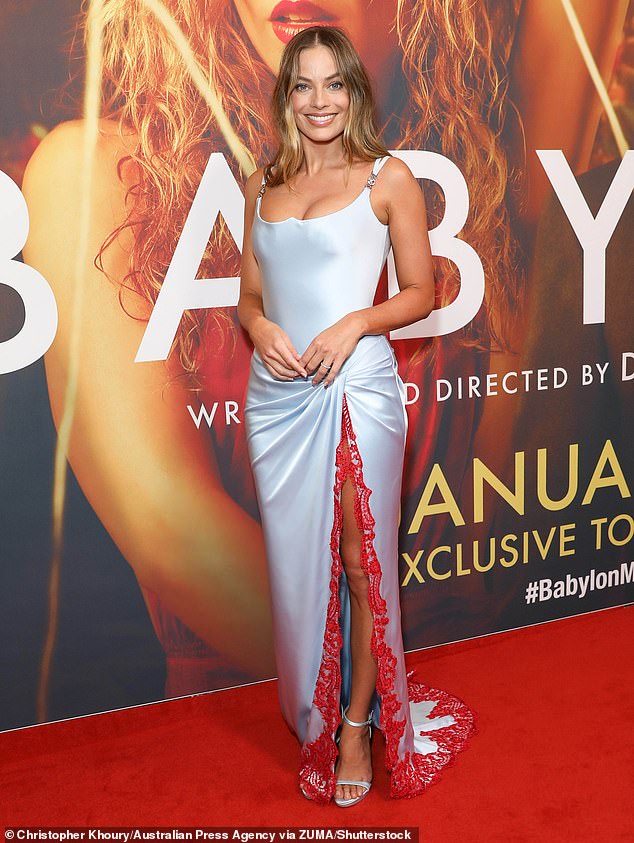 The snug silver-blue number is a modern version of the gown Carla Bruni wore to the Versace spring 1995 couture show. It had featured on the runway the year before.

But Margot’s version featured a red lace-trimmed thigh split, which many fans didn’t like.

‘Nevertheless, she persisted. Her dedication is truly unmatched, because why did you add red lace to this SS95 Versace gown? Like, is she just doing red because she wore a red dress in Babylon? I’d love to know the thought process,’ one fan said.

‘The red lace ruined the dress. Leave it alone. As the old saying goes, if it ain’t broke, don’t fix it,’ added another. 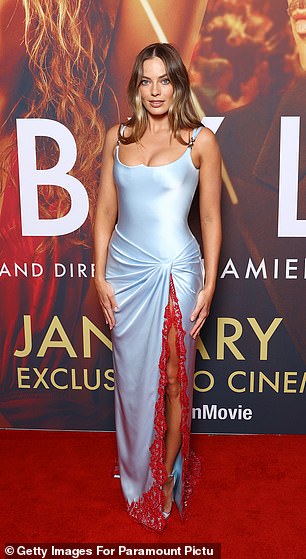 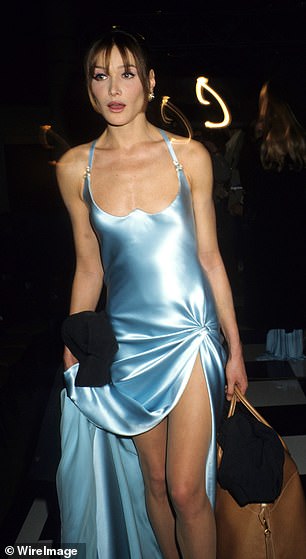 Ditching her usual Chanel attire, Margot opted a dress from Versace’s 1995 archive. The snug silver-blue number is an updated version of the gown Cala Bruni wore to the Versace spring 1995 couture show (right) 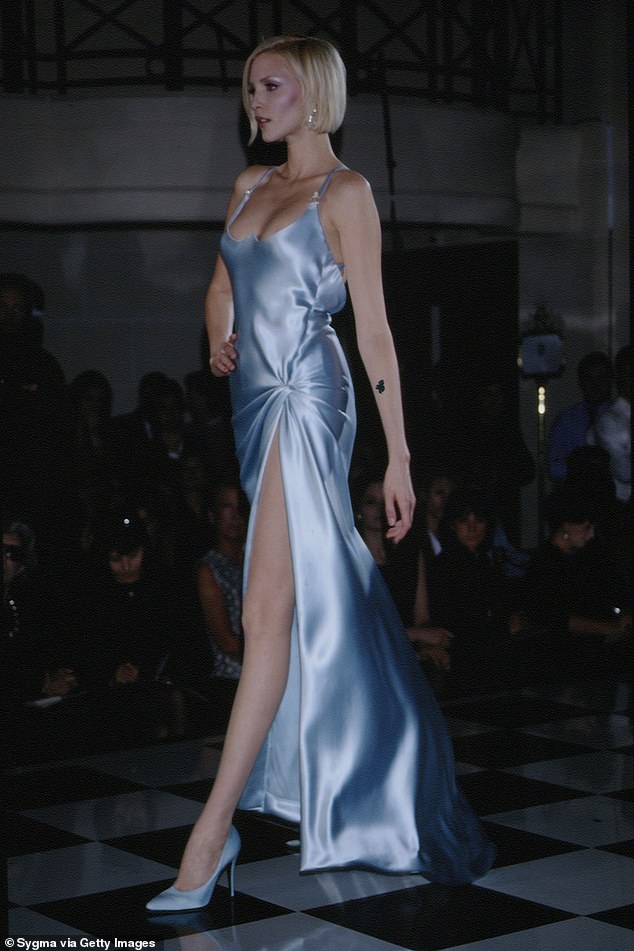 ‘She could have just worn bold red jewellery,’ commented one.

Others were confused about the fit of the bodice, with some saying the ‘ill-fitting’ underwear looked ‘lumpy’.

‘The fit of the breast cups looks like they stuffed her bra too. I desperately want to see her in the Row or Jill Sander. So we can see her not some terrible outfit,’ one critic wrote.

‘Its just me or the padding on the chest of that dress looks like she has something growing in her breasts?’ commented another. 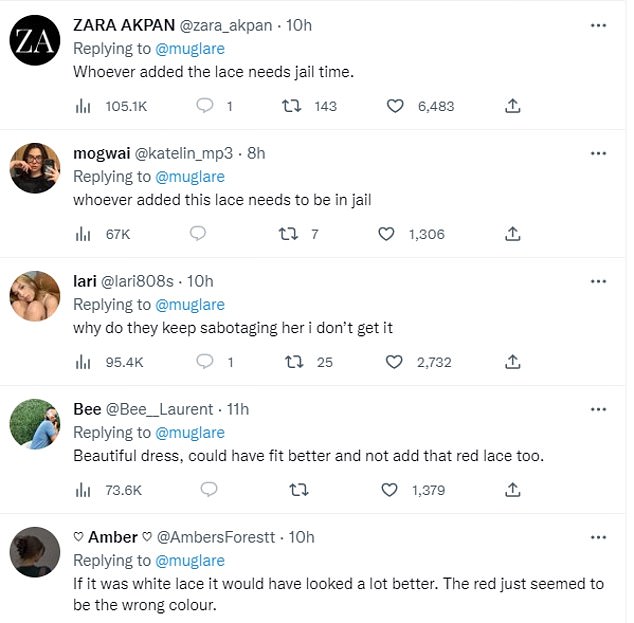 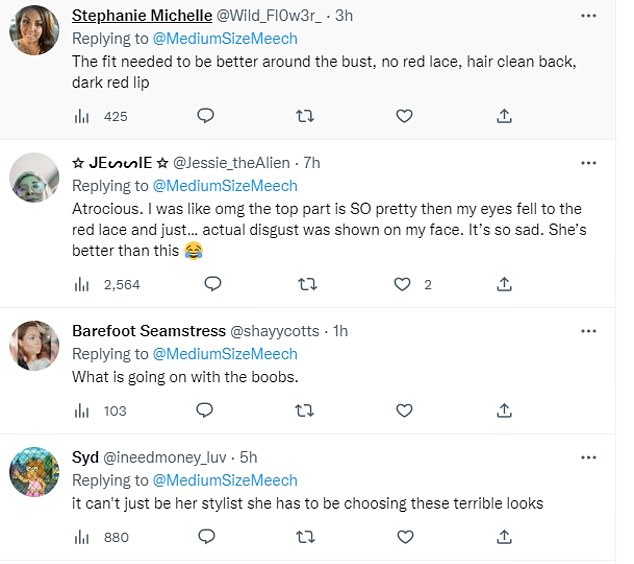 ‘The fit needed to be better around the bust, no red lace, hair clean back, dark red lip,’ commented one.

‘My theory is she does it to hide her beauty so she still has interesting opportunities.

‘Can you imagine if she choose to play up her beauty and shine? She’s made to play Barbie but we know that movie is going to be unhinged, much like Margot’s glam squad,’ said one. 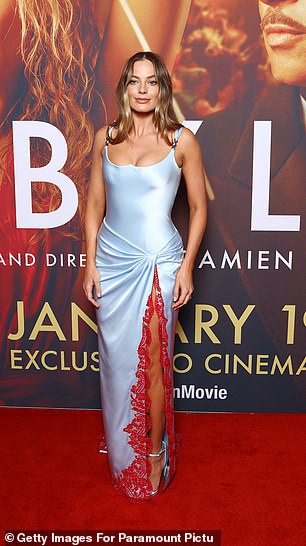 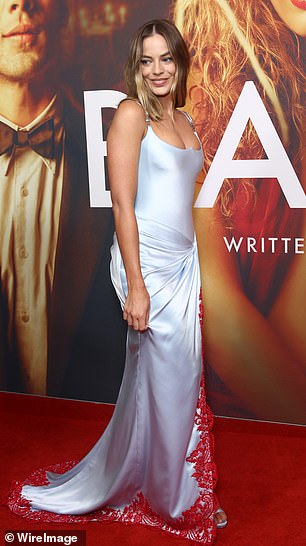 Meanwhile, many thought the dress Margot wore to the Sydney premiere of Babylon was an improvement on her recent red carpet looks. Speaking to Daily Mail Australia, stylist Donny Galella said it was good to see her stepping away from her usual Chanel and opting for a different designer 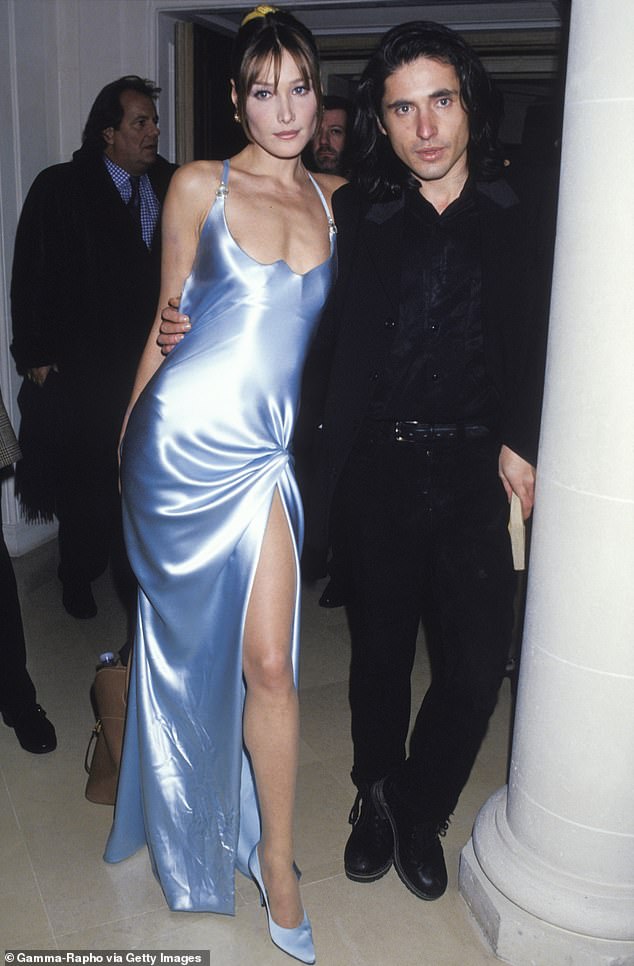 Meanwhile, many thought the dress Margot wore to the Sydney premiere of Babylon was an improvement on her recent red carpet looks.

Speaking to Daily Mail Australia, stylist Donny Galella said it was good to see her stepping away from her usual Chanel and opting for a different designer.

‘I love this pastel blue Versace on her, so it’s good to see her not wearing Chanel,’ he said.

‘The gown was inspired by a Versace gown worn in 1995 by model Carla Bruni to the Met Gala. But I wish she did wear an Aussie label to the Australian premiere.

But Donny thinks Margot should also be representing her country by slipping into some Aussie couture.

‘Imagine if she wore some Aussie Couture brands like J’Aton, Steven Khalil, Toni Maticevski, Yousef Akbar, Nicky Velani and Pallas Couture. I would love to see her in more jewel tones like blues and greens, more red, more gold and silver,’ he said. 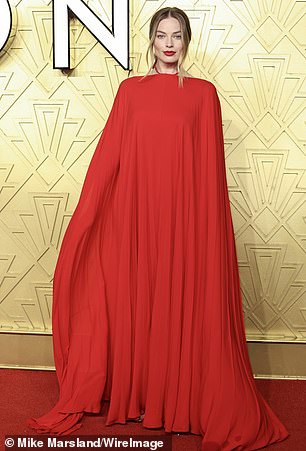 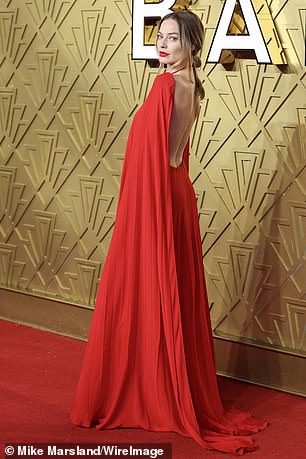 Donny said he is also excited to see her experiment with couture during her upcoming promo tour for Barbie.

‘This could be her biggest year in fashion and I just hope she can step away from Chanel and wear other brands like Valentino, Shiaparelli, Gucci, McQueen, Balmain, Zuhair Murad and Armani,’ he said.

‘That pale pink Chanel dress [from the Golden Globes] was far from her best look; I was expecting so much more. She is insanely talented and a gorgeous girl and I just want to see her in couture that does her justice,’

Many agreed with Donny and loved her Versace number

He said the pink number was ‘a bit boring’, although it was a subtle nod to the Barbie movie.

‘She has a relationship with Chanel, so she was probably paid to wear that gown. Lots of celebrities have contracts with design houses and are then locked into wearing only that brand.

‘But she just attended the (London) Babylon premiere in a red Valentino gown.

‘I absolutely love that she is wearing Valentino. The back of this gown is sublime. Not a huge fan of the front of the gown. Her hair and makeup, that red lip is flawless. Stunning!’ 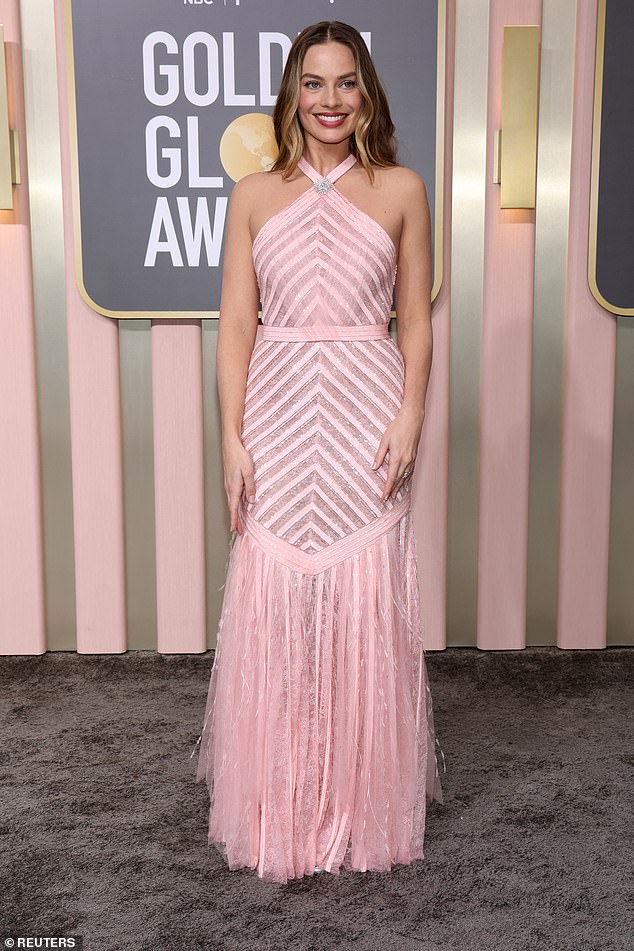 Last week, the actress opted for a custom Chanel gown to the Golden Globes which was described as ‘boring and bland’, with keyboard warriors claiming her stylist must ‘hate her’ due to a string of red carpet flops

Her soft pink crystal-embellished dress featured a ruffled hem, and extra sparkle came in the form of a diamond broach pinned to the bodice

Last week, the actress opted for a custom Chanel gown to the Golden Globes which was described as ‘boring and bland’, with keyboard warriors claiming her stylist must ‘hate her’ due to a string of red carpet flops.

Despite topping best-dressed lists, many thought the soft pink crystal-embellished dress featuring a ruffled hem was ‘boring and stale’.

Margot’s choice of pink appeared to be an homage to her upcoming role as Barbie in the upcoming Greta Gerwig-directed comedy, while the flapper style is likely a nod to her role in Babylon, which is set in the 1920s.

Despite the clear references to her projects, trolls were quick to criticise the look, with one writing: ‘Imagine being Margot Robbie’s stylist. Managing to make a woman as beautiful as her look bad. Wow. I’m sure it takes a lot of hard work and dedication’.

Margot was named as a brand ambassador for Chanel in 2018, and has almost exclusively worn it on the red carpet since.

In the last five years, critics have heckled her outfits online, with many calling on her stylist Kate Young to ‘free her’ from the contract.

While no details of a formal contract have ever been made public, some speculated her deal with the brand had come to an end after she wore an emerald green Bottega Veneta dress to the Governors Awards in November, which was described as her ‘best look ever‘.

Days later, she was papped leaving a New York City hotel in a Proenza Schouler power suit and an oversized Bottega blazer.

She also wore a flowing charcoal Celine dress to the European premiere of Amsterdam in London in September, with fans taking to TikTok at the time to celebrate the ‘end of her Chanel era’. 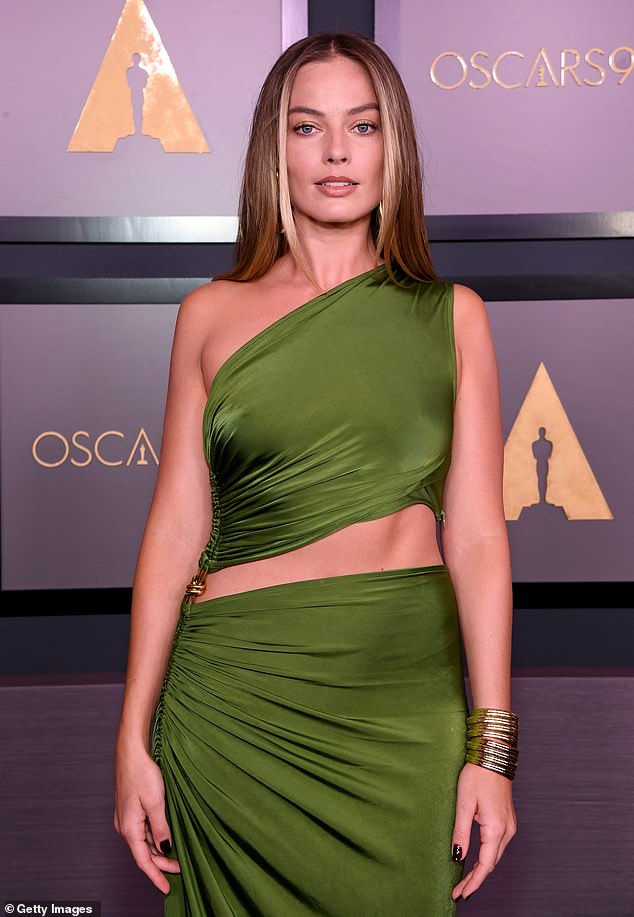 Some speculated Margot’s deal with Chanel had come to an end after she wore an emerald green Bottega Veneta dress to the Governors Awards in November, which was described as her ‘ best look ever ‘ 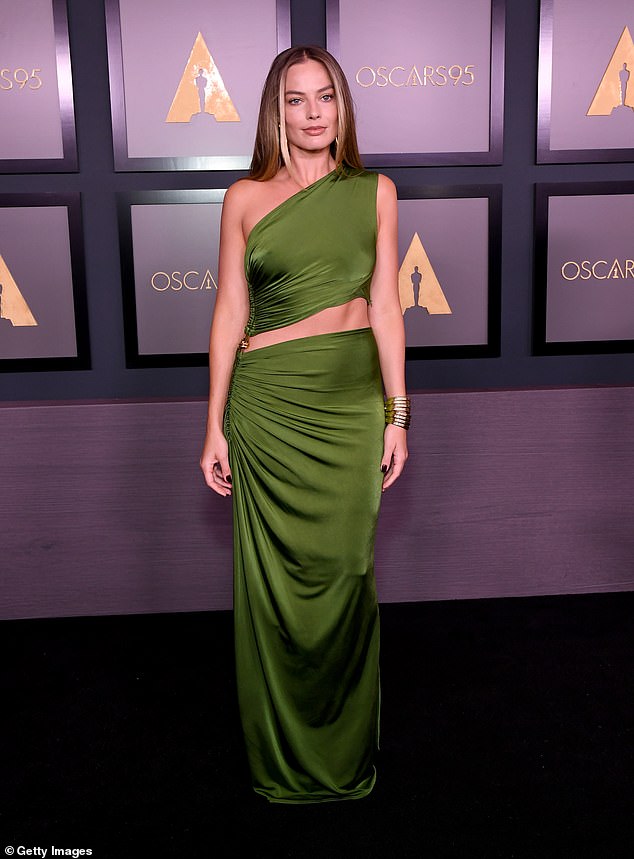 However, the I, Tonya star returned with a Chanel look at the Golden Globes this week, which disappointed some amateur fashionistas.

‘Margot Robbie’s stylist knows she would break the internet and everyone would be jealous of her as the most stunning woman in the world, so she lets her wear ugly outfits to protect us,’ one fan joked.

The sartorial expert took part in an episode of The Lady Bunch, hosted by Rozalia Russian, where he dramatically asked the former Neighbours star to ‘call him’.

‘Your stylist is literally f**king torturing you. You look like an old wench!’ he said. 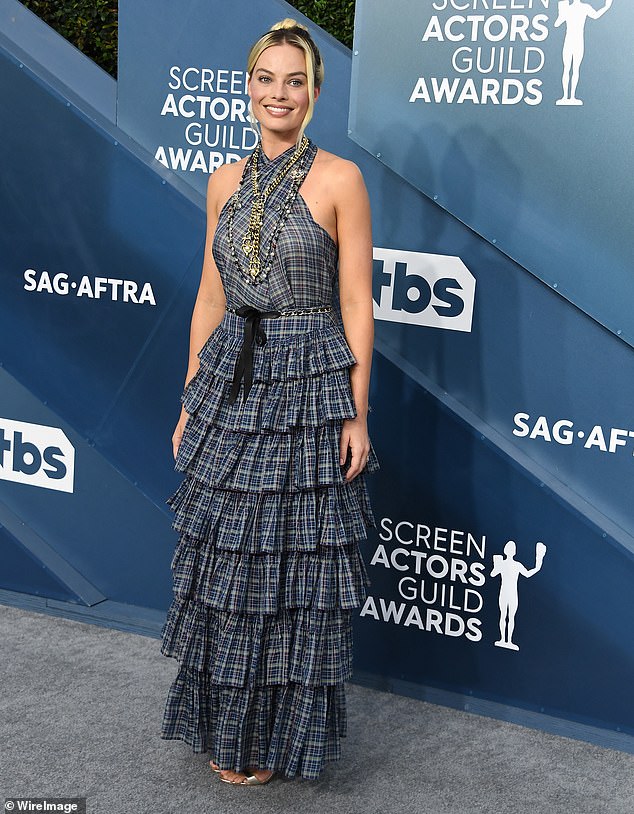 In 2020, celebrity stylist Elliot Garnaut named Margot as his ‘worst-dressed’ Australian star in Hollywood. (She is pictured at the 2020 Screen Actors Guild Awards) 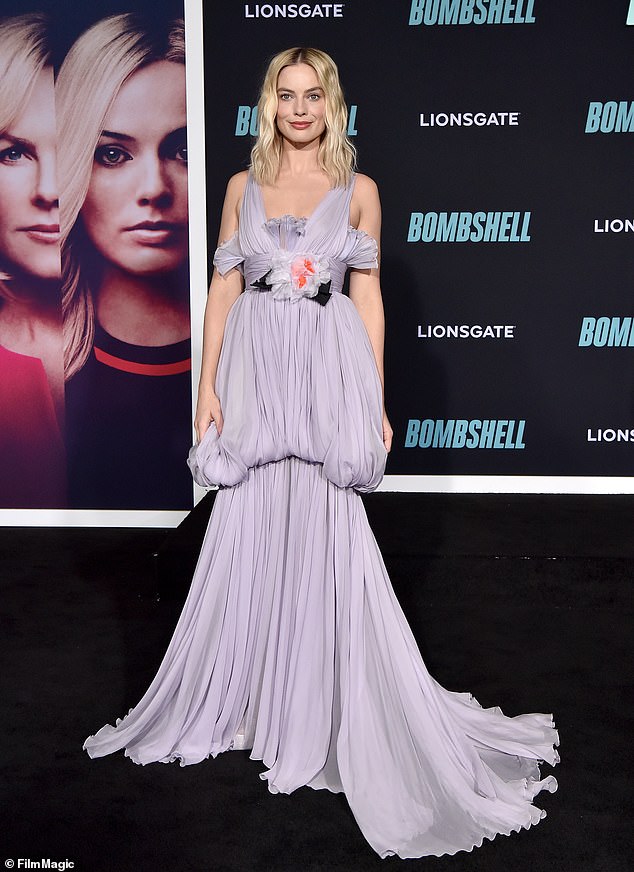 One fan asked Elliot who he felt was the worst-dressed Australian celebrity. Elliot then said dramatically, ‘Margot Robbie. Call me b***h!’ 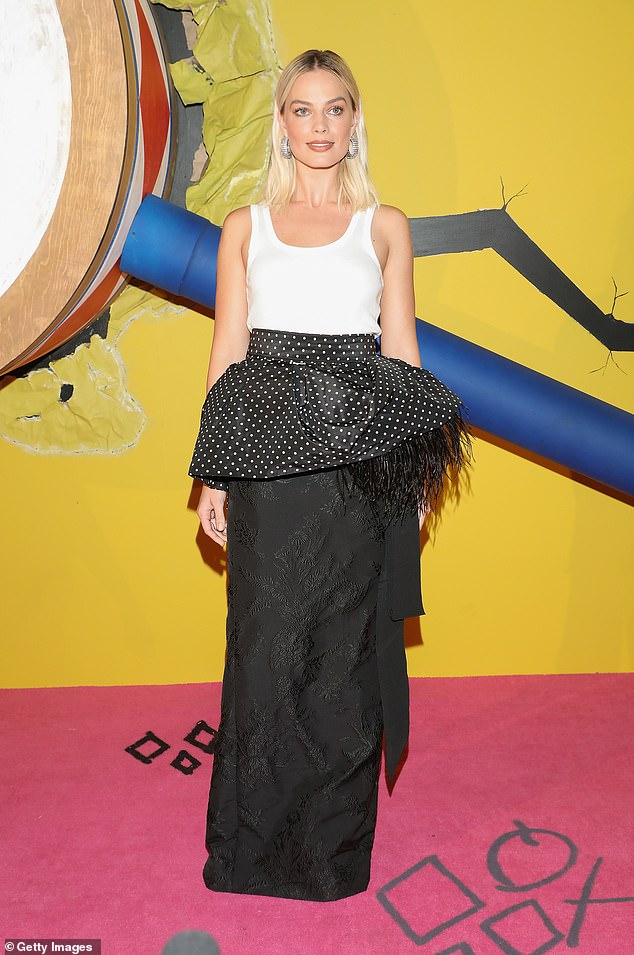 ‘Somebody at Chanel obviously hates her,’ Elliot joked at the time. (Margot is pictured at the Birds of Prey premiere in Mexico City in January 2020) 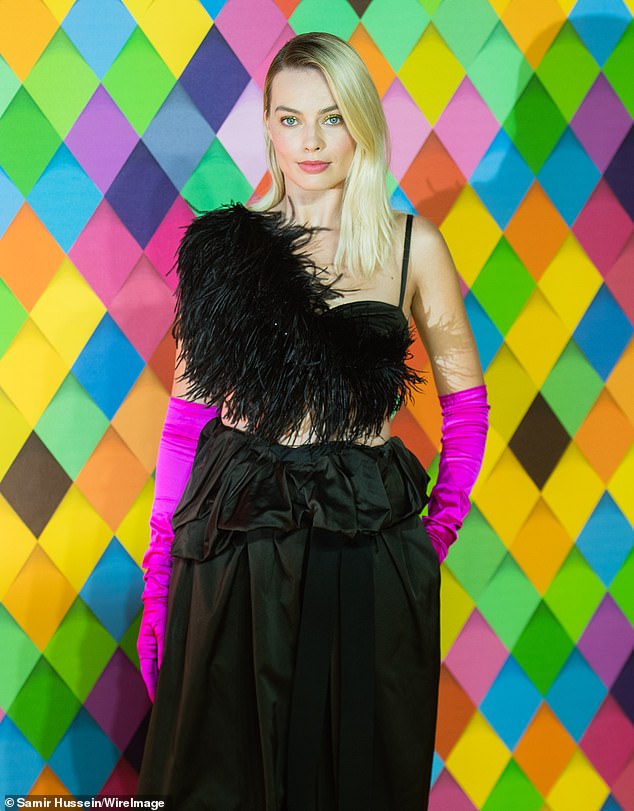 ‘She has the entire archive at her disposal and she’s walking out in these old rags. B***h, no!’ he added. (Margot is pictured in London on January 29, 2020)

The Railways is also looking at temporary cancellation or pre-termination of certain long distance and short distance passenger trains keeping in view the...
Read more

Vinyl Decal: Using Them On The Floor To Highlight Your Business

Businesses try to highlight their presence in several ways bur using floor decals is a common trend you may note among the marketers and...
Read more

Don’t get trapped in cycle of fear that Islam is in danger in India: RSS chief Mohan Bhagwat

Asserting that the DNA of all Indians is the same, Rashtriya Swayamsevak Sangh (RSS) chief Mohan Bhagwat on Sunday urged Muslims not to...
Read more

Just in time for Halloween failures in production are scarier than most movie monsters. Here's a personal scary story of a production fail.Read...
Read more

Benefits Of Garlic For Men That You Should Know

Behind the upsetting smell for certain individuals, garlic ends up having medical advantages that can't be questioned, and one of them is intended for...
Read more
Business

Why You Should Hire A Car with Driver In Dubai

Introduction A lot of people travel by car when they visit Dubai. The city is a lovely place to be, and it is also the...
Read more