Keeping Up With The Kardashians veteran Kendall Jenner was seen in a new flirty video for Jimmy Choo on Thursday.

The older sister of Kylie Jenner pranced about on a New York City rooftop complete with a swimming pool and lounge area in her sky-high heels from the luxury brand as she swung her chic little purses.

The 28-year-old reality TV star has become the face of the designer with the new ads dropping this week. 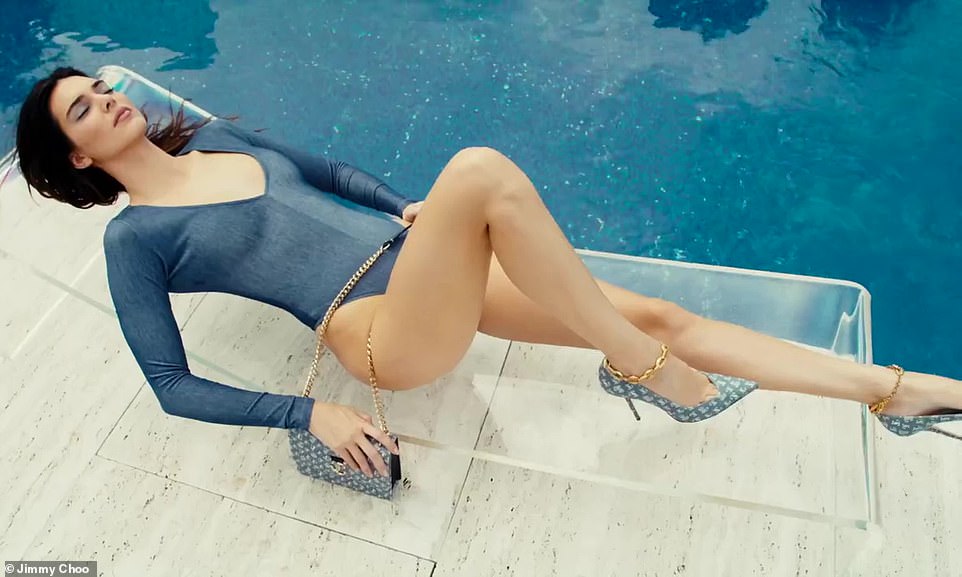 Dreamy job: Keeping Up With The Kardashians veteran Kendall Jenner was seen in a new flirty video for Jimmy Choo on Thursday 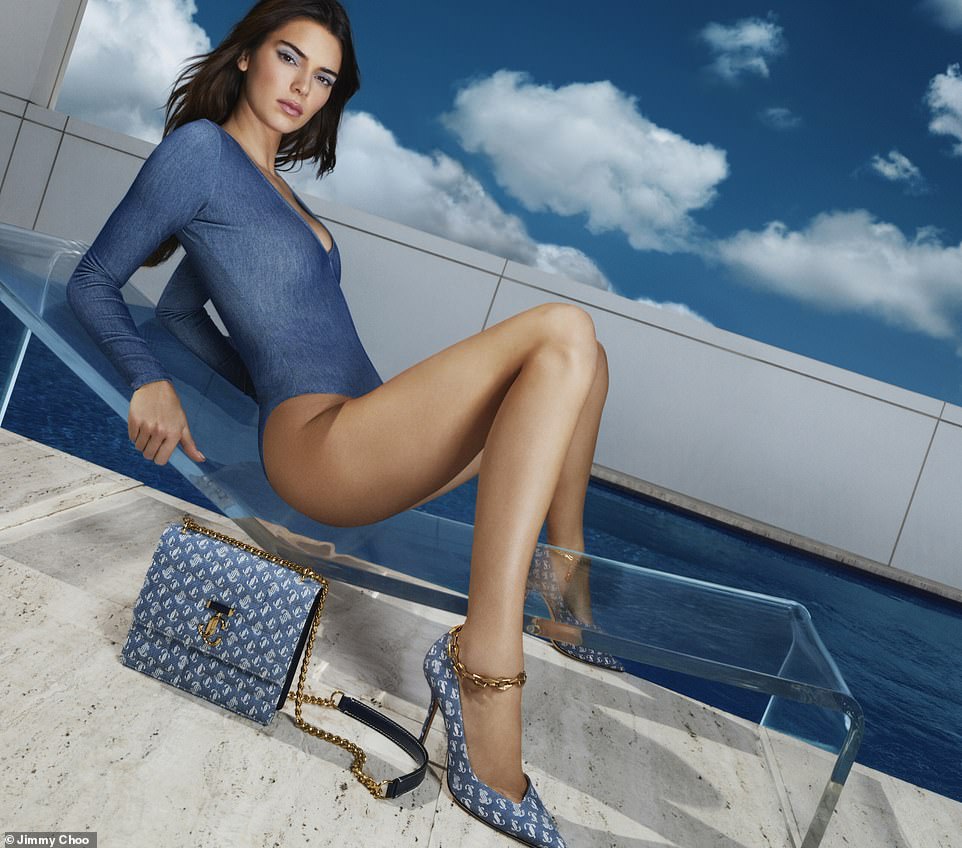 She is in the best shape of her life: The siren looked slender in this plunging blue leotard with matching heels and purse

She made her toned and very long legs the highlight of the fabulous portfolio where she wore plunging dresses with matching high heels and cute purses.

The Vogue cover girl was photographed on the balcony of a New York City high rise building that looked fit for a celebrity.

She was also seen in one piece blue leotard as she revealed her very trim figure; she added matching blue heels and a purse.

In one shot that had a younger teen beat vibe she wore a pink mini dress with matching platform pale pink tennis shoes and a small blue and gold purse. 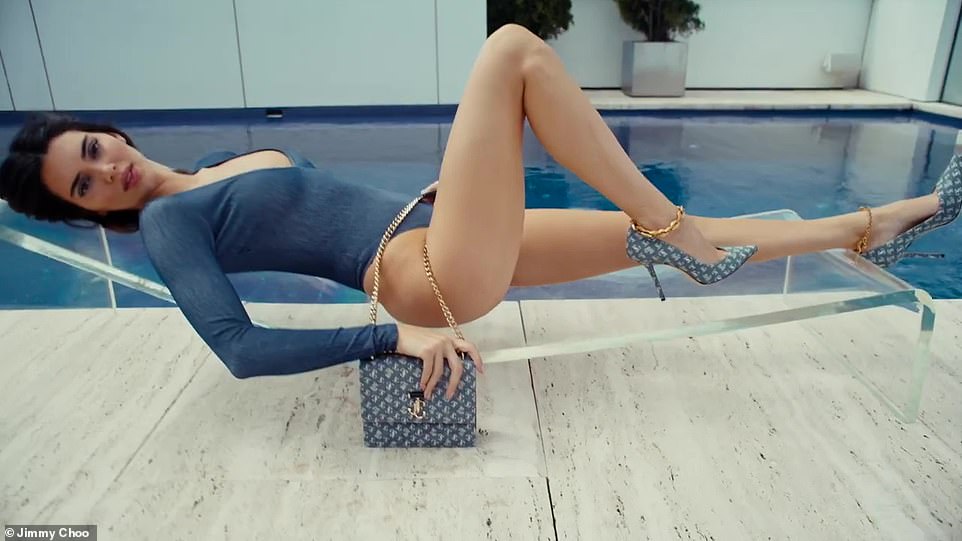 Perfect in purple: The siren was also seen crouching down as she held one long, lean arm out over her knee 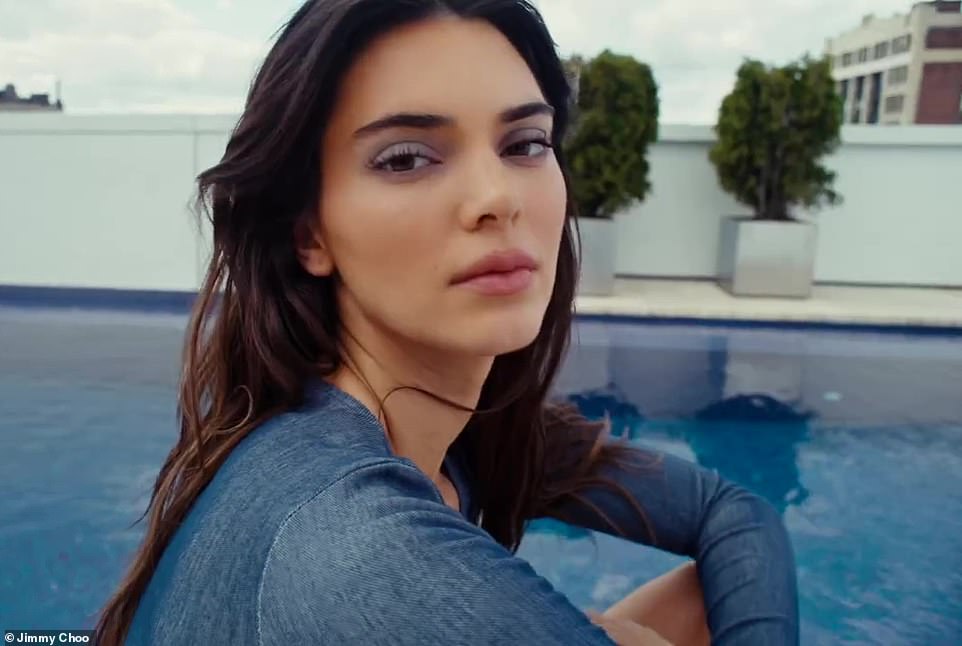 Model 101: The siren from Southern California made a stock model pose with one leg up and one arm up

Kendall also wore a black suit with loafers in another set up. Her blue shoulder bag read Jimmy Choo London.

The 5ft10in beauty appeared to be wearing frosty pink and purple makeup and her dark hair was styled in straight layers. 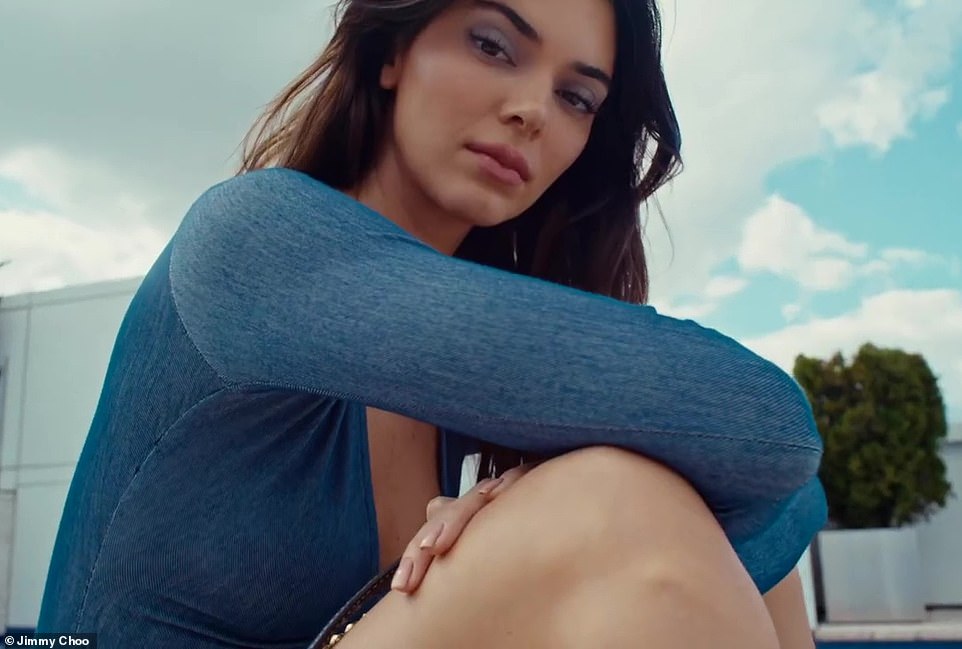 Blue mood: On Wednesday new images from the photo shoot featuring the Keeping Up With The Kardashians veteran were posted to Instagram

In September she said she was ‘pretty chill’ about her boobs being on display for her first runway shoot aged 18.

The model wore a sheer top for her catwalk debut for Marc Jacobs in 2014, and she was quite happy to free the nipple.

Taking part in Vogue’s ‘Life in Looks’ series, she said: ‘I had just turned 18 and I remember getting a call from my agent saying that Marc wants to put me in this sheer top, and I was like, ‘I’m game.’

‘I was pretty chill, even though my boobies were out. I don’t mind, I’m all good with the nipple.’ 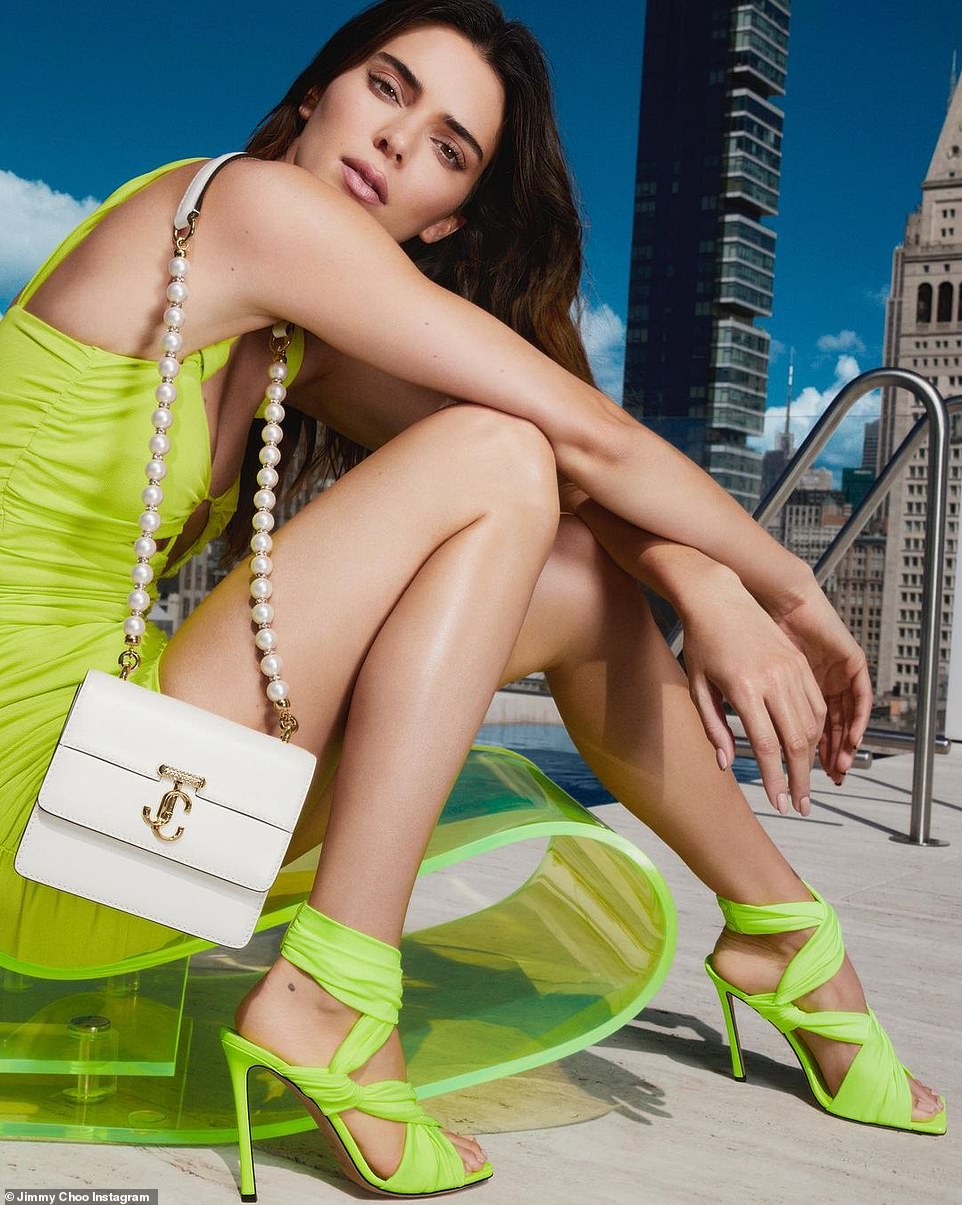 Green is good: The Vogue cover girl was photographed on the balcony of a New York City high rise building that looked fit for a celebrity 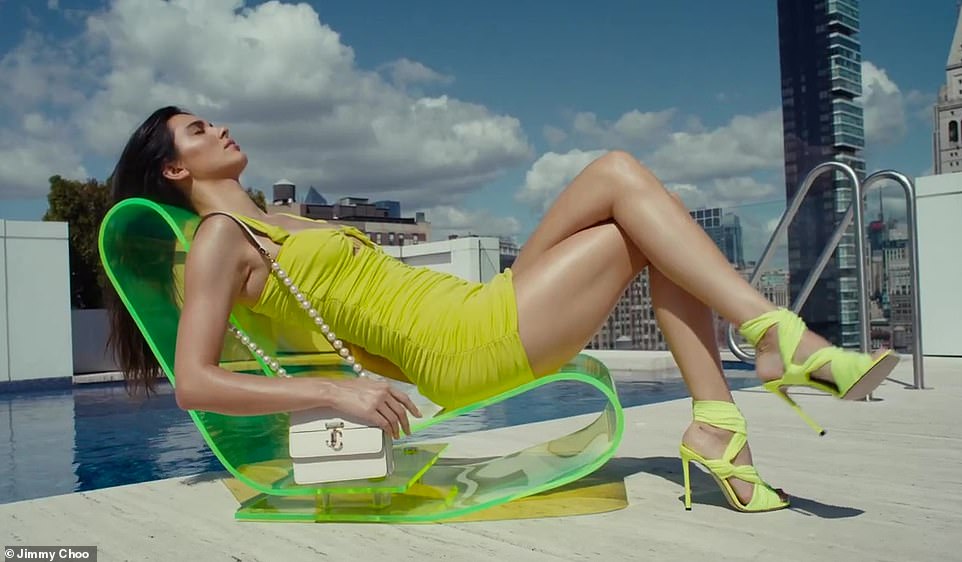 A younger teen beat vibe: Here she had on a pink mini dress with matching platform pale pink tennis shoes and a small blue and gold purse

She continued: ‘So, it didn’t make me any more nervous. I genuinely was just like: ‘Dope, whatever they want. It’s their vision so let’s do it’. I was completely comfortable.’

The raven-haired beauty – who has since walked in shows for the likes of Chanel, Alexander Wang, Oscar de la Renta, Fendi and Balmain – also recalled being given a walking lesson and how she ended being ‘really stiff’ on the runway as she overthought the advice she was given.

She said: ‘I remember going into my agency and getting a walking lesson, because I didn’t necessarily know what I was doing. 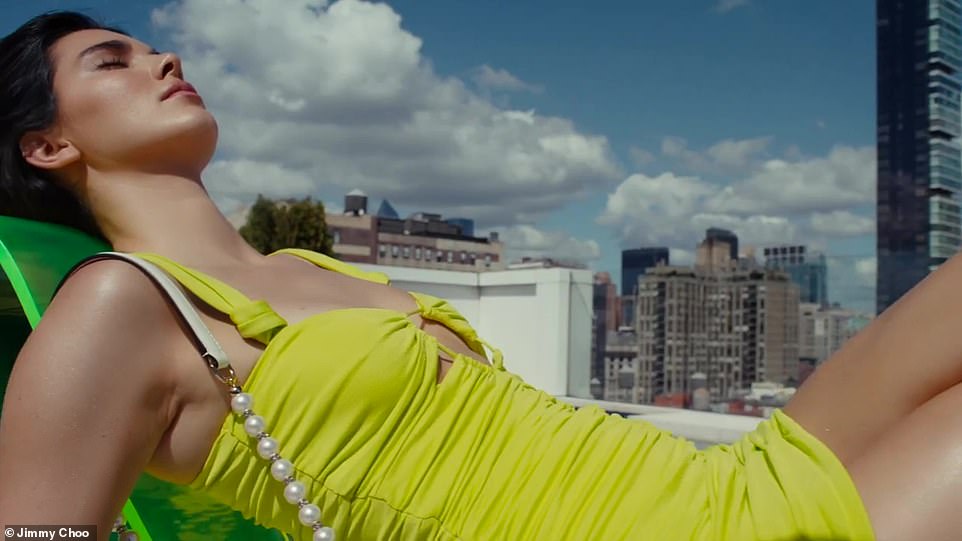 Glamorous for a Manhattan evening: The Calabasas, California native wore a skintight, below-the-knee white dress with high heeled loafers and a matching purse 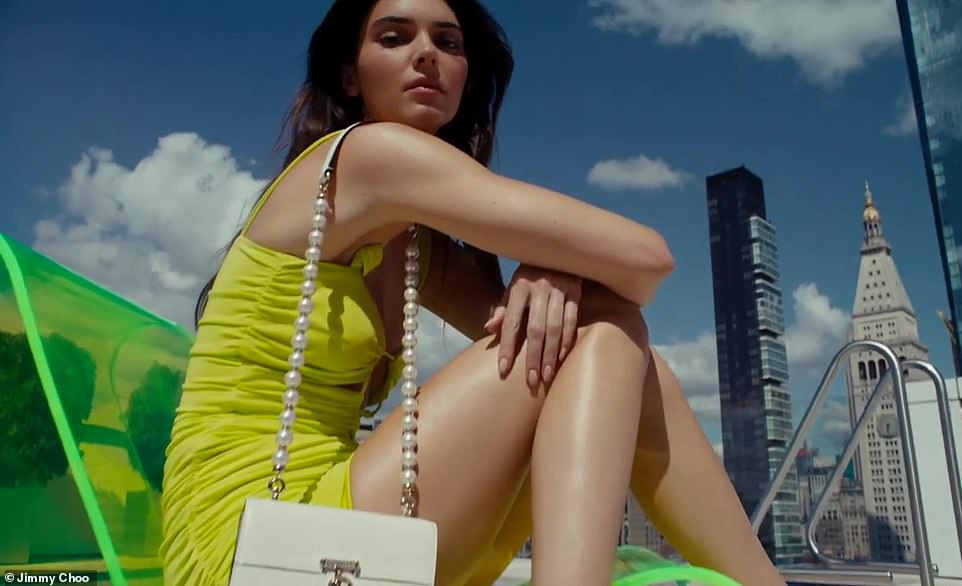 A cool model move: To show the purse off well, Jenner threw it over her shoulder just so

‘And I think I took the tips too seriously and ended up being really stiff when I got on the runway. I’ve learned a lot since then.’

Kendall previously admitted she likes to wear sheer tops when she’s having ‘a good boob day’.

In 2017, the ‘Kardashians’ star defended a picture of herself posted to Instagram in which she wore a sheer top with no bra, and covered her nipples with pizza emojis, saying she felt her chest ‘looked nice’ that day. 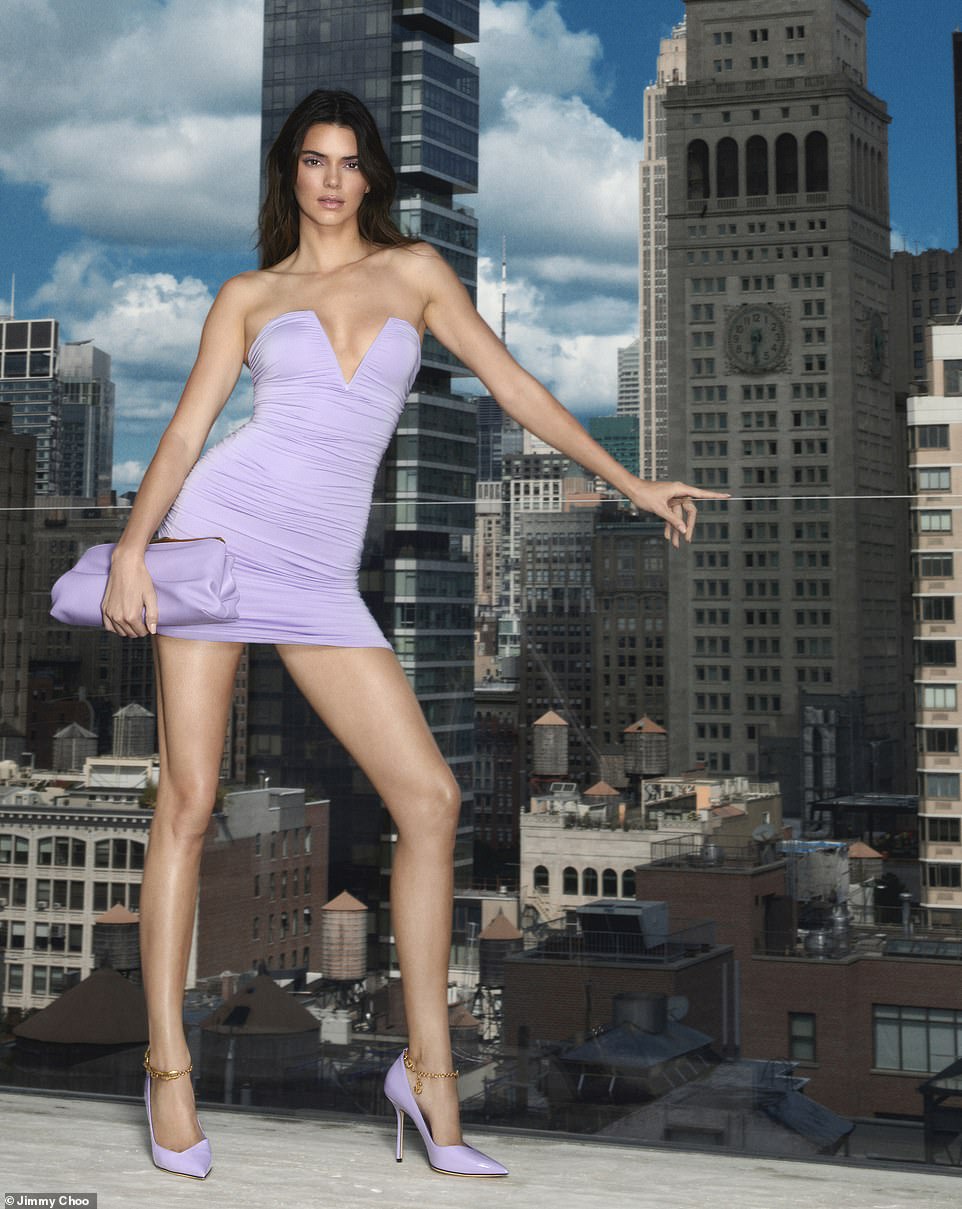 Back in black: Kendall also wore a purple dress and heels in another set up. Her blue shoulder bag matched. The print ads for the campaign dropped on Wednesday

She wrote on kendallj.com: ‘I don’t know if you can relate, but I just felt like I was having a really good boob day, lol. Do you know what I mean?

‘Your boobs go through phases and on this particular day, I felt like they just looked nice! (sic)’

She had consulted her close friends Hailey Bieber and Gigi Hadid before she posted the photo.

She added: ‘My shirt was see-through, so I took this photo and just texted it to Hailey and Gigi before I left to meet them and was like, ‘Is this too much?’

Learning to Live With Mark Zuckerberg

How Can a Well Designed Website Turn Prospects into Clients

A well-designed website may provide several advantages to your business, many of which are directly related to clients. Here, we'll show you how a...
Read more

Georgia Fowler has walked down the aisle with her fiancé Nathan Dalah in a gorgeous countryside ceremony. The New Zealand born model and her Fishbowl founder...
Read more

Winnie Byanyima: ‘It’s powerful to be different. I never hesitate to be myself’

Most leaders have had to navigate conflicts to survive and rise within their organisations, but few have ever faced the sort of front-line...
Read more

Melbourne property owners don't pay much attention to their air duct systems. Since the ductwork unit is hidden, it is natural for them to...
Read more
Business

For those who do not have the faintest clue about the stock market and how it works it’s highly important to know what franking...
Read more
Business

How To Reduce Risks Associated With Bridging Loan

As a result, lenders are introducing new loans such as bridging loans UK. Compared to traditional mortgages and property loans
Read more