Jowita Przystal and Hamza Yassin stepped out at live tour rehearsals after the presenter joked about being ‘jealous’ amid her romance with Giovanni Pernice.

The Strictly Come Dancing professional, 28, was all smiles as she arrived for rehearsals on Tuesday alongside her former dance partner Hamza, 32.

They were joined by their co-stars, including the likes of Ellie Simmonds, Diane Buswell and Helen Skelton, as they left their hotel in Birmingham. 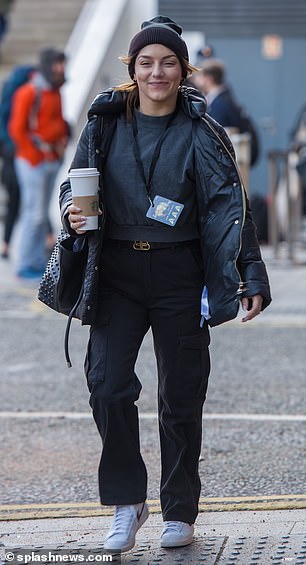 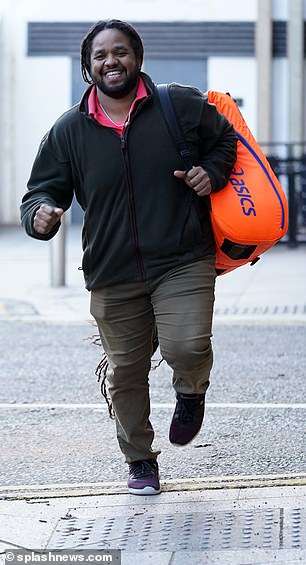 All smiles: Jowita Przystal and Hamza Yassin stepped out at live tour rehearsals after the presenter joked about being ‘jealous’ amid her Giovanni Pernice romance

Elsewhere, Hamza also joked about being ‘jealous’ of Jowita potentially being partnered with someone else on Strictly last year.

It comes after Jowita confirmed her romance with Giovanni, 32, as they left dinner holding hands on Sunday, amid claims Hamza was ‘devastated’ by their relationship.

During their latest outing, Jowita cut a laidback figure in black trousers and a grey jumper, which she styled with white trainers and a padded jacket.

She kept her essentials in a studded handbag and swept her brunette locks beneath a black beanie hat. 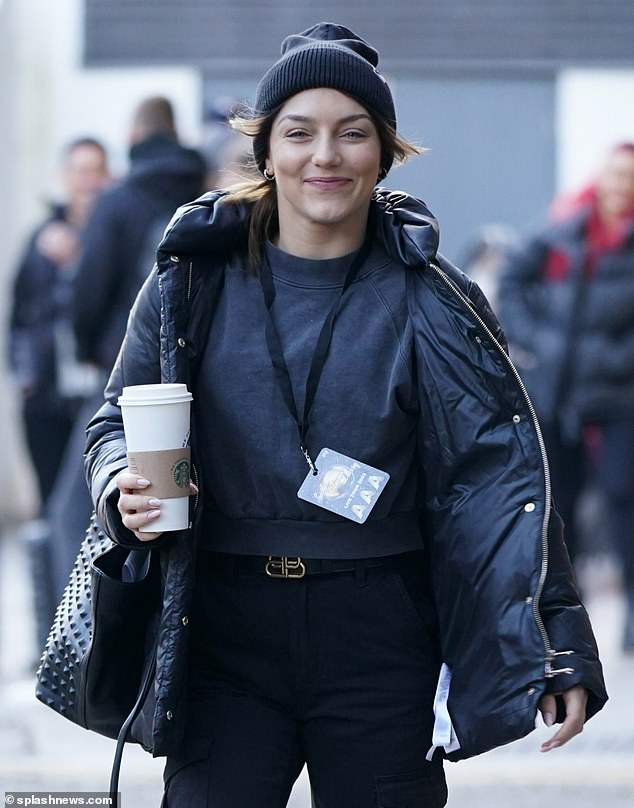 Good spirits: The Strictly Come Dancing professional, 28, was all smiles as she arrived for rehearsals on Tuesday alongside her former dance partner Hamza, 32

Casual: Jowita cut a laidback figure in black trousers and a grey jumper, which she styled with white trainers and a padded jacket

The Polish ballroom dancer showed off her natural beauty with a light dusting of make-up and clutched a coffee in one hand.

Meanwhile, Hamza kept it casual in olive trousers and a red shirt, which he wore beneath a zip-up black fleece.

The wildlife presenter kept comfortable in a pair of dark trainers and slung a bright orange sports bag across one shoulder.

The pair are currently rehearsing for the Strictly live arena tour, which kicks off on January 20 and runs until February 12, after they won the 2022 Glitterball trophy on the dance contest. 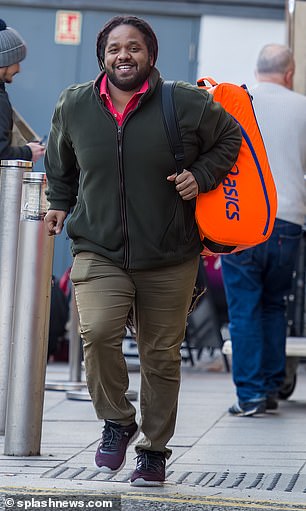 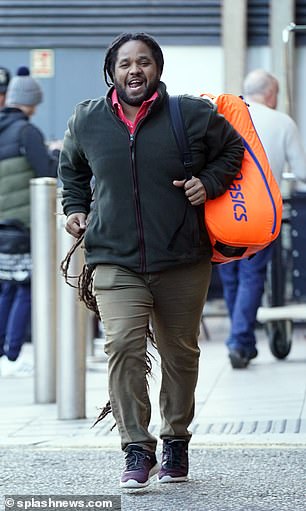 Good spirits: Meanwhile, Hamza kept it casual in olive trousers and a red shirt, which he wore beneath a zip-up black fleece

Bruno Tonioli is returning to Strictly to judge on the upcoming Strictly arena tour alongside Craig Revel Horwood and Shirley Ballas, after being replaced by Anton Du Beke on the panel.

The Strictly stars’ latest outing comes after Hamza joked about being ‘jealous’ of Jowita potentially dancing with another celebrity next year.

It followed claims that Hamza was ‘devastated’ by Jowita’s new relationship with fellow professional Giovanni. 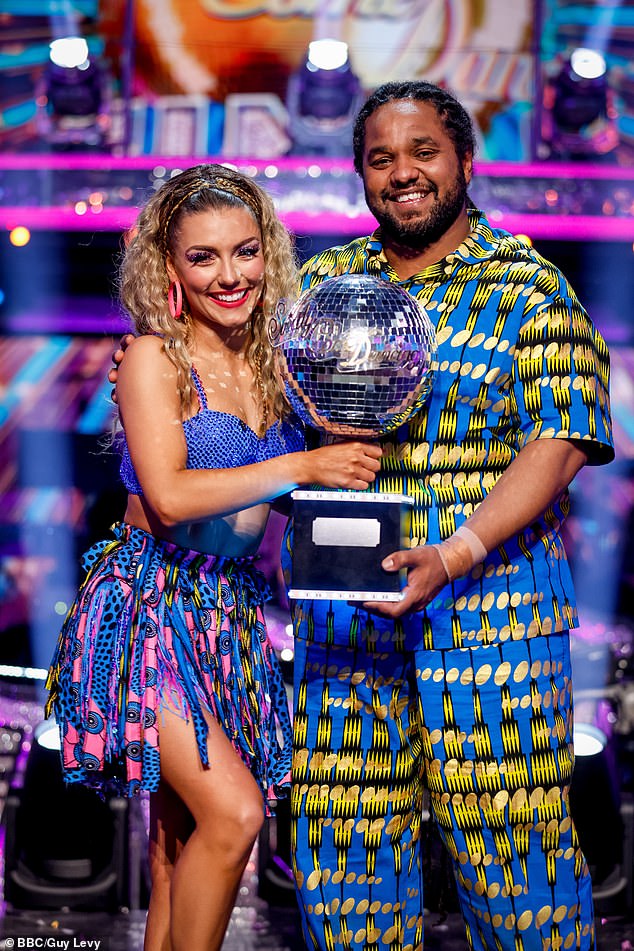 Humorous: The Strictly winners’ (pictured) latest outing comes after Hamza joked about being ‘jealous’ of Jowita potentially dancing with another celebrity next year 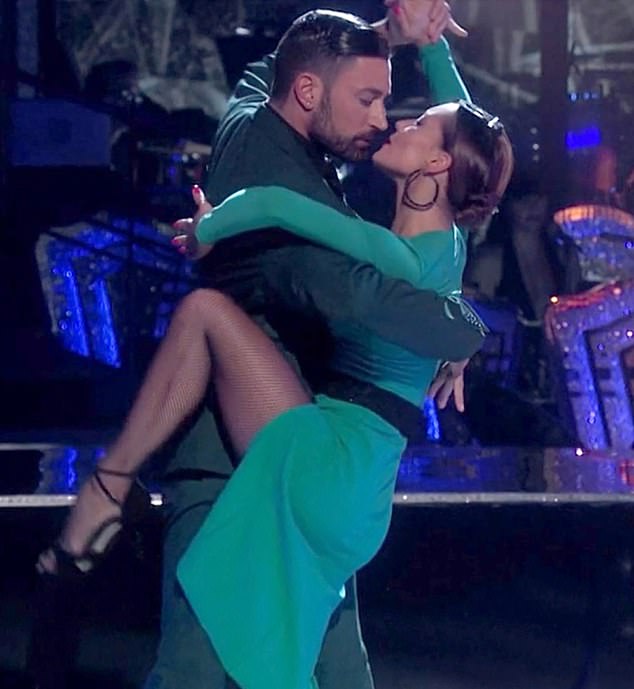 New flames: It comes after claims that Hamza was ‘devastated’ by Jowita’s new relationship with fellow professional Giovanni (Giovanni and Jowita pictured dancing together)

Speaking to Hello!, Jowita joked: ‘I hope I get the call again, but it will feel weird not dancing with Hamza, I hope you’re not going to be jealous.’

To which Hamza agreed, quipping: ‘I must admit, I will be jealous. I’ll be saying “That’s not how you do that lift!”‘

He added: ‘She’s not getting rid of me that easily. I’m planning a few things involving Jowita; there’ll potentially be a few documentaries.’

Their humorous comments come after Jowita and Giovanni finally confirmed they are dating on Sunday night as they left cosy dinner together holding hands. 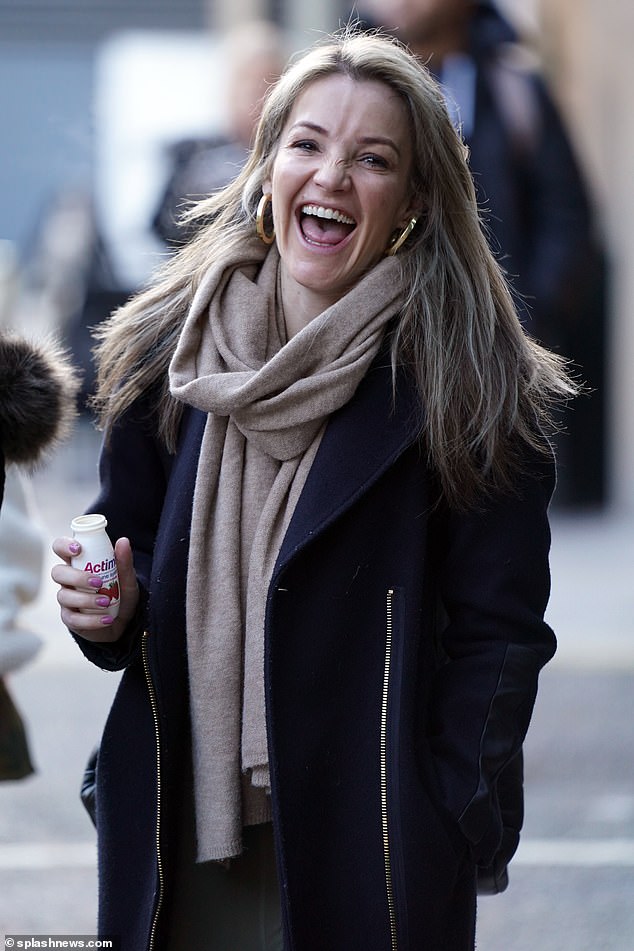 Stars: Elsewhere at rehearsals, they were joined by their co-stars, including the likes of Helen Skelton, as they left their hotel in Birmingham 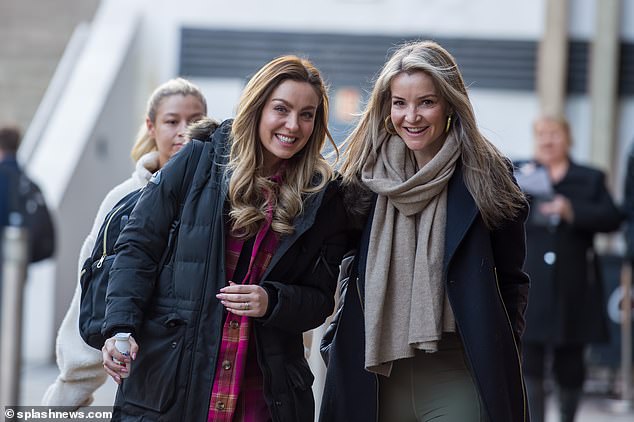 Pals: Helen and Strictly professional Amy Dowden were seen laughing and chatting as they stepped out together

They spent two and a half hours inside the restaurant before leaving together and walking off hand in hand.

It follows claims that Jowita had been caught kissing Giovanni backstage during filming on the BBC talent show.

The Sun claimed the sizzling couple are the BBC series’ ‘worst kept secret’ after they openly flirted at a recent party. 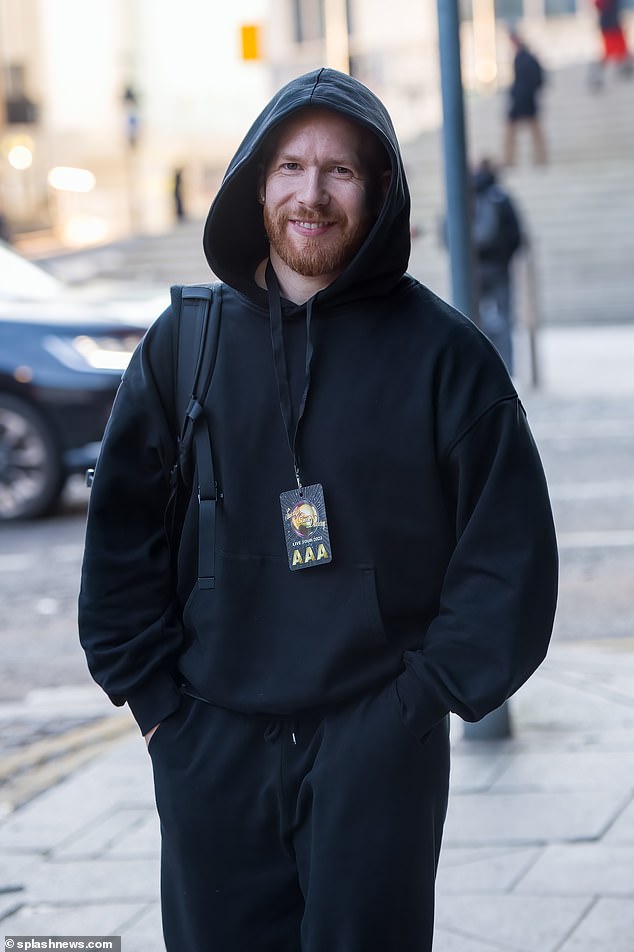 Laidback: Neil Jones cut a casual figure in a black tracksuit co-ord set and slung a black backpack over one shoulder

Rehearsals: Diane Buswell showed off her signature red tresses for the outing while Ellie Simmonds stepped out in a sporty ensemble

She was paired with a celebrity for the first time this year, while Giovanni has been starring on the show since 2015.

A source told the publication: ‘She and Gio are the worst kept secret, but make a great couple.

‘While they both kept insisting they were single, the pair’s chemistry was ridiculous — and they kept getting busted snogging in corridors. Crew even saw them kissing in the production office.

‘They make a great couple though, and have been pretty inseparable in the last few weeks. 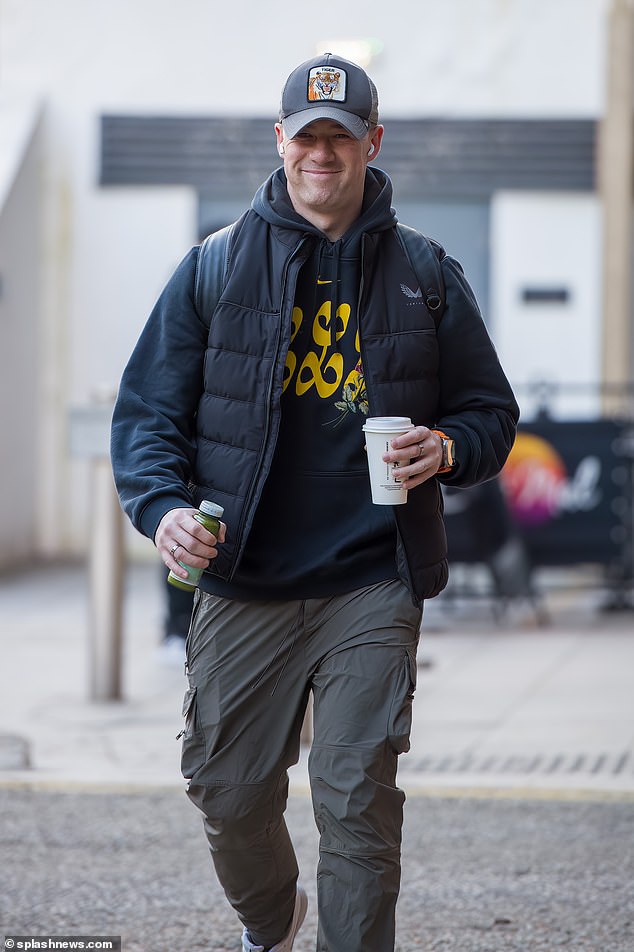 Grinning: Kai Widdrington was also in attendance, cutting a sporty figure in olive trousers and a black hoodie 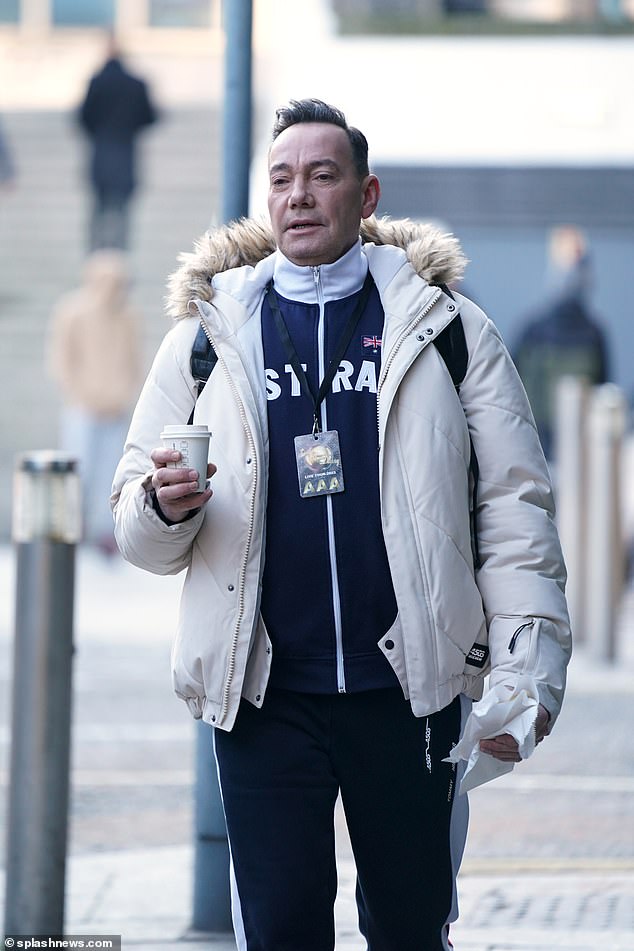 Judges: Craig Revel Horwood is joining the tour as a judge alongside Shirley Ballas and Bruno Tonioli, who is making his return to Strictly

‘Jowita, especially, wanted to keep things quiet so she could keep focused with Hamza, and not distract from the competition.’

The insider added that Giovanni and Jowita went public with their romance at Gio’s pal Chelsea star Jorginho’s birthday dinner, where they openly flirted after weeks of keeping their romance secret.

Meanwhile, Jowita’s dance partner Hamza Yassin reportedly unfollowed her love interest Giovanni amid claims he is ‘devastated’ by their relationship.

According to The Sun, Hamza had previously followed Giovanni until last week. MailOnline has contacted their representatives for comment. 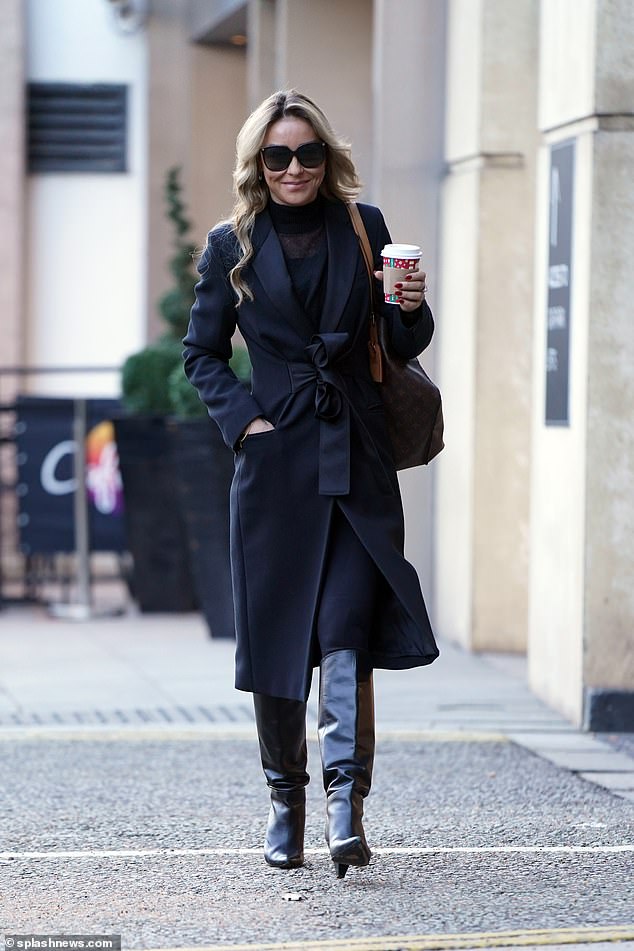 Jowita’s budding relationship with Giovanni is said to have been a blow for Hamza, who ‘fell head over heels for her’.

‘Hamza and Jowita became very close and at times were quite touchy-feely, obviously their closeness really helped when it came to them winning the trophy,’ a source told The Sun.

‘But while Jowita thinks the world of him, she held back from anything romantic and kept him slightly at arm’s length.

‘When it was clear she was involved with Giovanni, the reason for that became clear. But while Hamza wants her to be happy, he was quietly devastated.’ 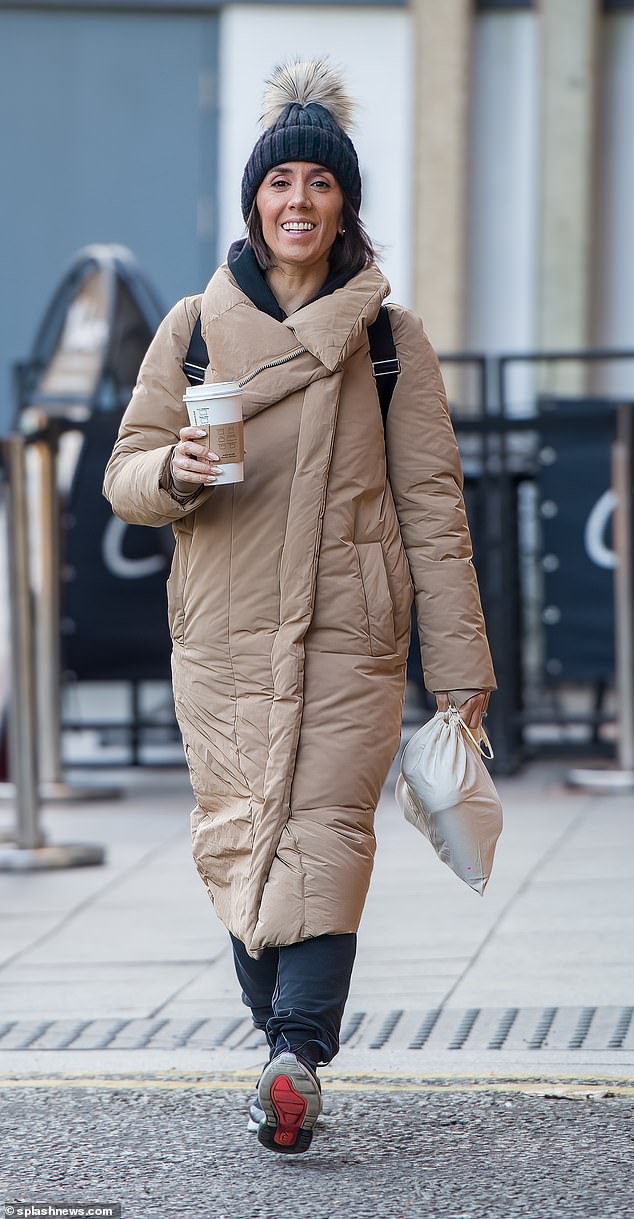 Wintery: Janette Manrara wrapped up warm amid the chilly temperatures in a beige jacket

Chief Minister Arvind Kejriwal on Friday said Delhi has somehow gained control over the second wave of COVID-19 and the city will now...
Read more

Neon Signs: Is The Trend Still Fresh Or Old For Businesses

You know there has been a lot of discussion on neon signs these days. Some of them still follow the trend whereas others simply...
Read more

More coverage: Facebook under fireThe Facebook Papers are a set of internal documents that were provided to Congress in redacted form by Frances...
Read more

Inbound Marketing B2B: How Does It Work?

Do you want to know more about inbound marketing B2B but don't know where to start? Keep reading and learn more about it here. Do...
Read more
Insurance

How can rental insurance protect you financially?

Many renters are under the belief that their landlord’s insurance policy will cover their belongings, but unfortunately, it is not covered by the landlord’s policy. Your landlord’s policy covers the building itself, but it may not include your personal belongings.
Read more
Business

How Can a Website Help you With Loans in Norway?

What would anyone say if you simply visit this website and find all the information you need about loans in Norway? Since Norwegian banks...
Read more