Boris Johnson will on Thursday face pressure from Joe Biden to work with the EU to end a bitter stand-off over a settlement in Northern Ireland, as post-Brexit talks ended in stalemate and threats.

The US leader, who meets his British counterpart in Cornwall ahead of a G7 summit, would not welcome any steps that imperilled or undermined the Good Friday Agreement or peace in the region, said Jake Sullivan, his national security adviser.

Johnson will also face pressure from European leaders at the summit, as the EU repeated its threat to retaliate with trade sanctions if Britain unilaterally suspends parts of the so-called Northern Ireland protocol, which aims to avoid a hard border on the island of Ireland.

Maros Sefcovic, European Commission vice-president, said he was sure that “European leaders will raise this issue” at the G7, which starts on Friday. Emmanuel Macron, France’s president, is among those who want the EU to take a tough line with Johnson.

[Joe Biden] is not issuing threats or ultimatums. He is going to simply convey his deep-seated belief that we need to stand behind and protect this protocol

In anticipation of diplomatic danger, Johnson is taking Lord David Frost, his Brexit minister, to the G7 summit at Carbis Bay. Dominic Raab, foreign secretary, is the only other UK minister attending.

Speaking on Air Force One as Biden flew to the UK, Sullivan said the president had been crystal clear about his rock-solid belief in the Good Friday Agreement as the foundation for peaceful coexistence in Northern Ireland. “That agreement needs to be protected, and any steps that imperil or undermine it will not be welcomed by the United States,” he said. The 1998 agreement ended decades of violent strife in the region.

“President Biden is going to make statements of principle on this front,” said Sullivan. “He is not issuing threats or ultimatums. He is going to simply convey his deep-seated belief that we need to stand behind and protect this protocol.”

Johnson claims that the EU’s demands for checks on goods moving between Great Britain and Northern Ireland are too onerous and are disrupting trade.

Speaking in Cornwall ahead of the summit, Johnson said he was looking for a compromise that protected the Northern Ireland peace process and insisted that he was “not worried” about the issue overshadowing the G7.

Both EU and UK sides confirmed after talks in London that splits persisted over how to address numerous issues with trading arrangements for Northern Ireland, ranging from veterinary checks to pet travel.

Speaking after the talks, Sefcovic said that EU patience was “wearing very, very thin” with the UK over its perceived failure to implement basic parts of the protocol.

Brussels already has legal proceedings open against Britain for unilaterally extending some grace periods — carve-outs from the normal border checks — under the protocol. 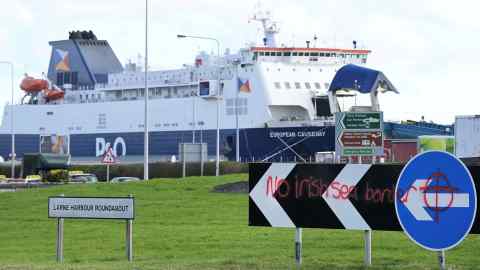 Sefcovic said the EU could take “cross-retaliatory measures” against Britain, such as introducing tariffs on some goods, or suspending co-operation in certain sectors, if the UK did not live up to its obligations.

“If the UK were to take further unilateral action over the coming weeks, the EU will not be shy in reacting swiftly, firmly and resolutely to ensure that the UK abides by the international law obligations,” Sefcovic said.

Following the meeting, Frost reiterated UK complaints that “the EU is insisting we operate the protocol in an extremely purist way”.

The lack of breakthroughs means that pressure is set to mount on both sides ahead of the imminent expiry at the end of this month of temporary exemptions that have allowed British sausages and other chilled meats into Northern Ireland.

Following the meetings, which also covered other bilateral issues such as fishing and citizens’ rights, the UK published its own breakdown of the state of discussions, saying there had been “some progress towards solutions” in certain “limited areas”, including free movement of guide dogs and VAT arrangements for second-hand cars.

Wall Street’s tech-heavy Nasdaq Composite was heading for a record high for the third consecutive session on Thursday after a hawkish tilt by...
Read more

When your business starts to branch out and gains more international recognition, one of the first things you should do is ensure that you...
Read more
Business

Freelancing means you will have a lot more responsibilities than the average salaried worker. Of course, there are advantages of freelancing – you are...
Read more
Business

Website Development companies are making a lot of money by enabling customers to buy their goods and services online via their websites.
Read more

Metal wall decor is the best trend of 2022. Much in trend, metal wall decor can be your way to bid goodbye to boring and dull walls. Metal wall art dazzles up your walls like nothing else
Read more
Home Decor

The HVAC system is a very crucial type of system needed for Heating, Ventilation, and Air Conditioning in your desired area. It consists of...
Read more
Home Decor

Advantages and Benefits of Retractable Roofing That You Should Know About

Retractable or extendable roof systems are certainly recognizable to anybody who has attended international sporting events. They enclose stadiums, providing games to go on...
Read more

Gold Bracelets: How to Choose the Right One

Gold bracelets are the most popular jewellery item globally, and they have been worn by people of all ages and cultures for centuries. The...
Read more
Lifestyle

All You Need to Know about Blue Dream Strain

Blue Dream is one of the few highly popular Sativa Dominant Hybrids, containing 30% Indica and 70% Sativa. The strain is perfect for all...
Read more
Lifestyle

Must have silver jewellery accessories in 2022

Never get some information about the number of adornments or accessories a woman owes; you might get a shock! Such is the affection for...
Read more

Apple, Google and other tech companies work together in diversity push