Jennifer Lopez and her proud husband Ben Affleck were more loved-up than ever as they attended the afterparty following the premiere of her film Shotgun Wedding on Wednesday night.

The actress, 53, took to Instagram to share a video inside the bash where her husband could be seen placing a kiss on her forehead.

At the premiere J-Lo was also joined by her co-star and recent Golden Globe winner Jennifer Coolidge, after starring in the film as a bridge whose location wedding is ruined after her island venue is overrun by criminals. 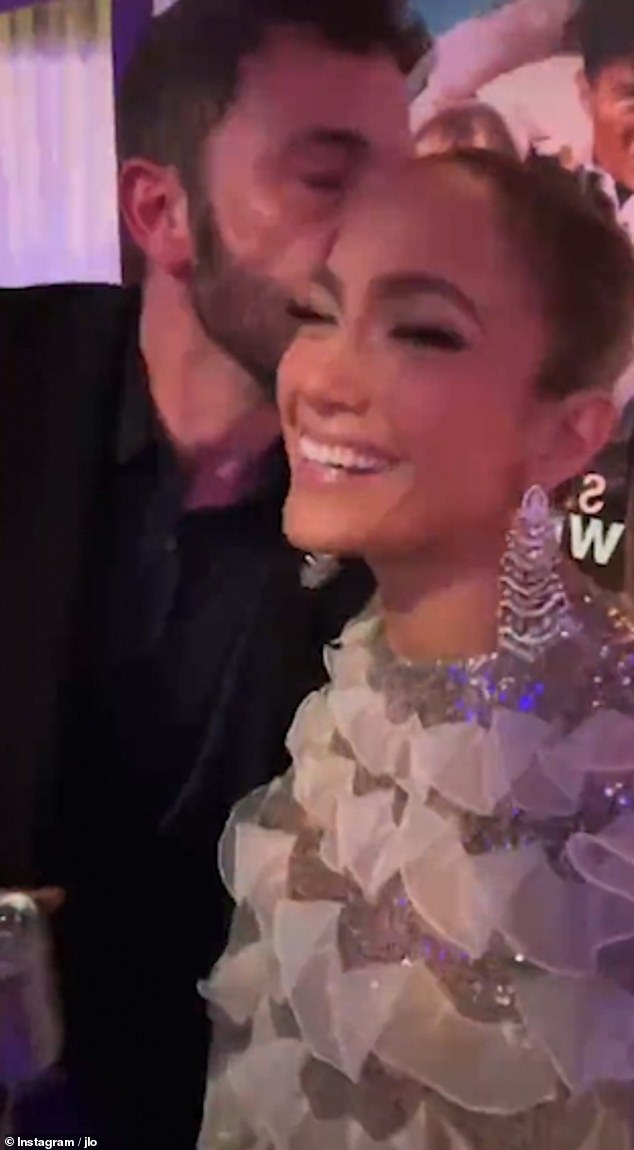 Sweet! Jennifer Lopez received a sweet kiss from her husband Ben Affleck as they enjoyed a night out at the premiere of her film Shotgun Wedding on Wednesday

At the start of the video, J-Lo could be seen mingling with her co-star Jennifer, before the two stars realised that they were being filmed.

Turning to the camera, Jennifer told her followers: ‘We are at the Shotgun wedding premiere, it was so amazing, this woman was fantastic!’ before turning to her co-star Coolidge, who cheered for the camera.

Turning her phone to show Ben sat alongside her, Jennifer said: ‘I am here with my hubby,’ who then stood up and pulled a fun expression for the camera.

Ben then placed a sweet kiss on Jennifer’s forehead before she turned the camera away, offering fans a glimpse inside the party. 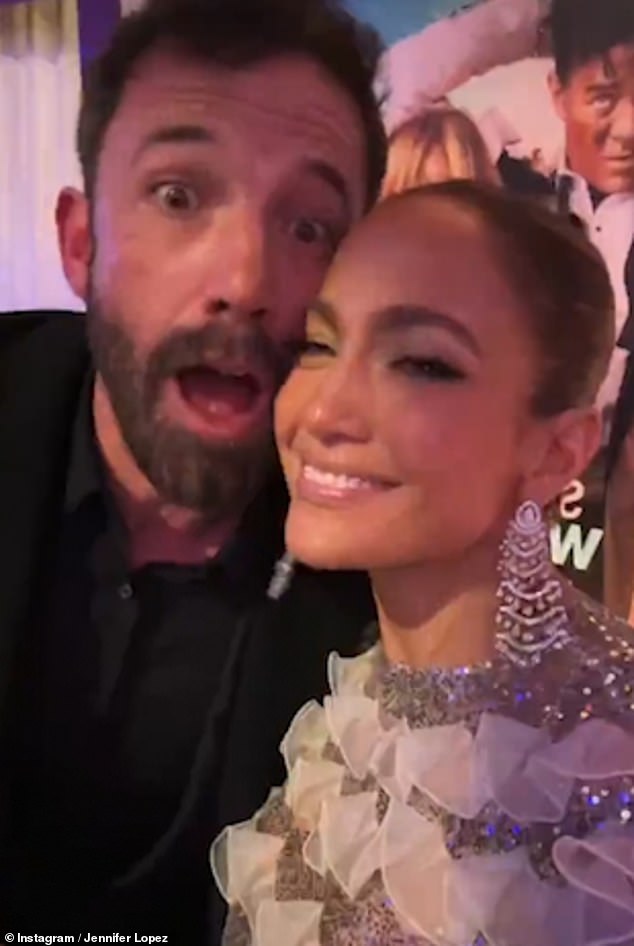 Loved-up! The actress took to Instagram to share a video inside the bash where her husband could be seen placing a kiss on her forehead 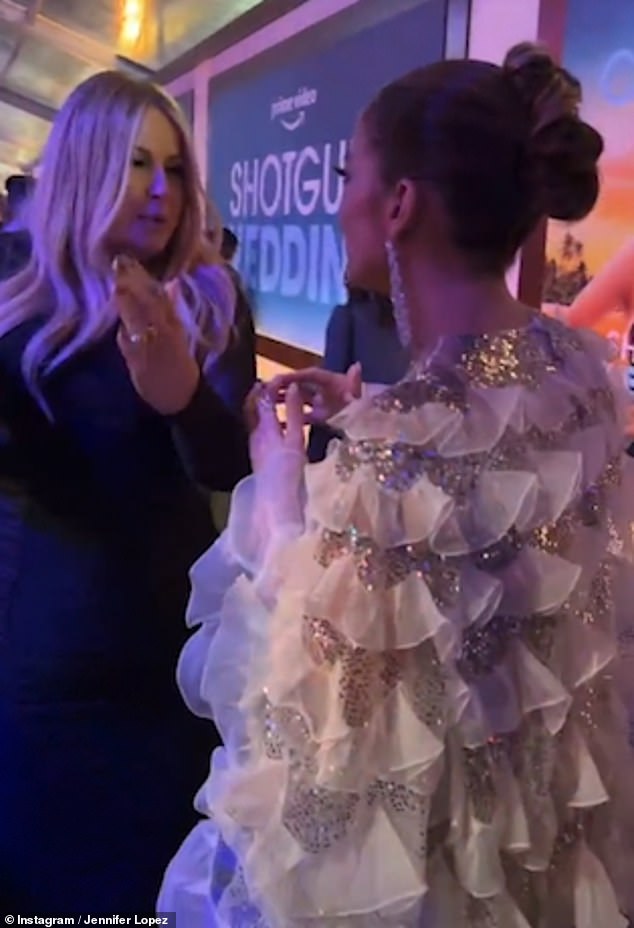 Best pals! At the start of the video, J-Lo could be seen mingling with her co-star and recent Golden Globe winner Jennifer Coolidge after walking the red carpet at the premiere

J-Lo added to her followers: ‘We are having a good time, there’s a lot of people.

She then turned the camera to show the huge crowd in attendance for the party, which comes ahead of Shotgun Wedding’s release on Prime Video on January 27.

Earlier in the evening, Jennifer dazzled in a sheer beige sequinned gown as she attended the premiere of the film. 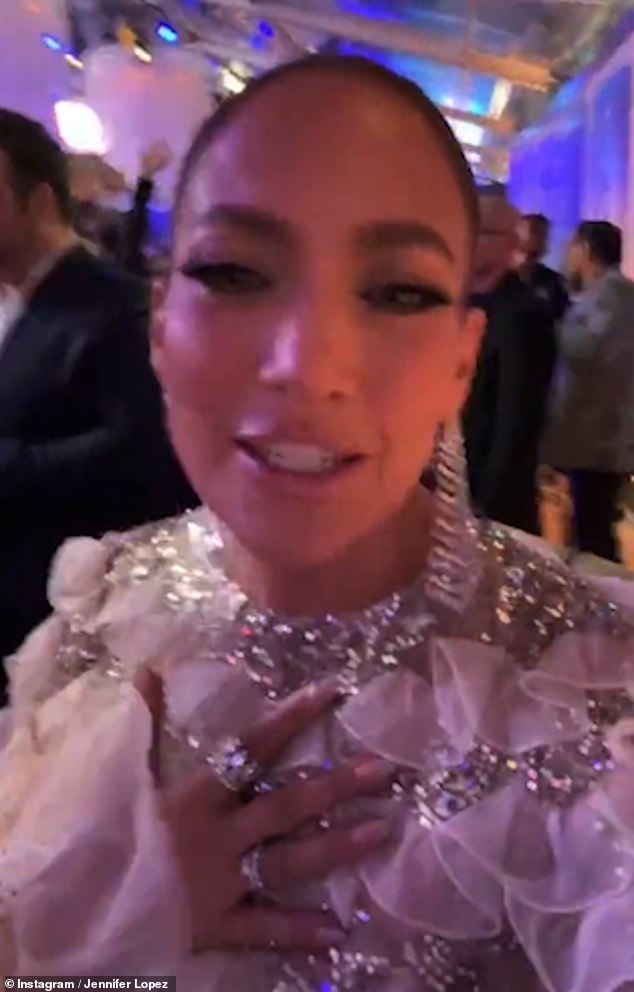 Gorgeous: She went onto add: ‘I can’t read anything right now but I love you guys, I recommend you should see this in the movies with an audience’ 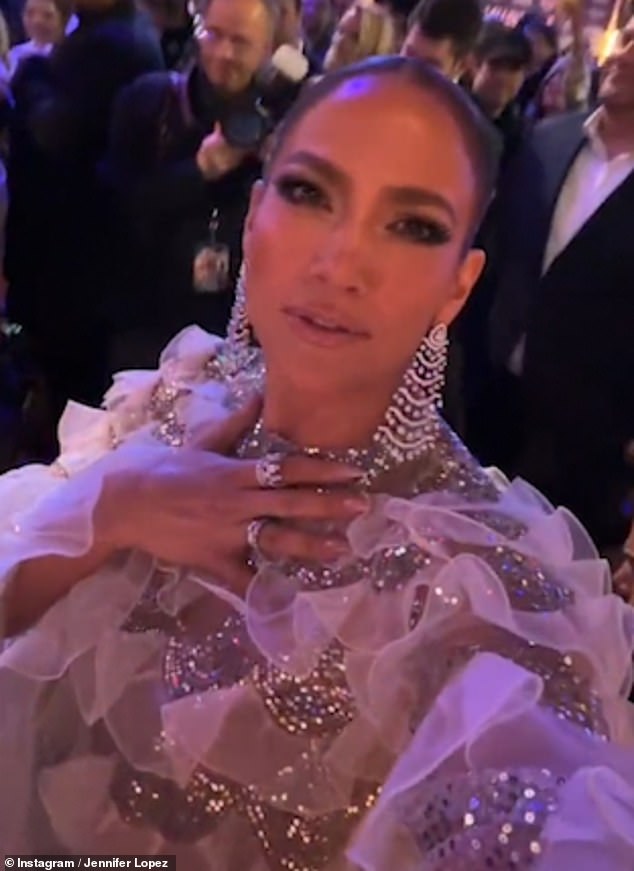 Stunning: After arriving on the red carpet, Jennifer changed into a sparkly silver mini dress with oversized ruffles

Jennifer shared the red carpet spotlight with her co-star Josh Duhamel, who was looking dapper in a black suit. Together, they play a couple whose destination wedding is taken over by criminals.

For the premiere’s after party, she proceeded to change into a silver ruffled mini dress with an Art Deco motif.

Jennifer also appeared on the late night show Jimmy Kimmel Live, where she gushed that eloping with Ben was ‘the best night of their lives’. 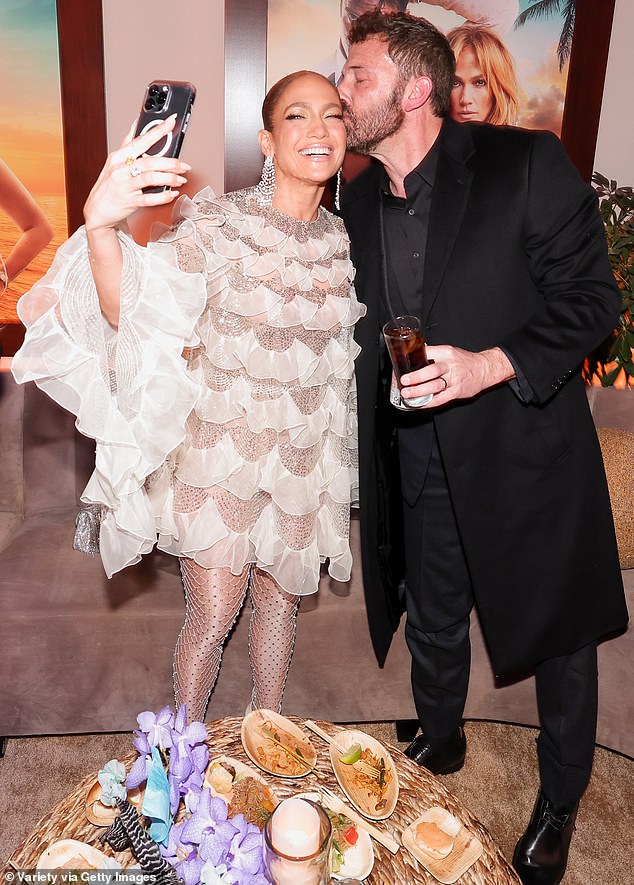 Cute! As they arrived for the post-premiere party, Jennifer showed off her gorgeous second outfit as she received a kiss from her spouse Ben 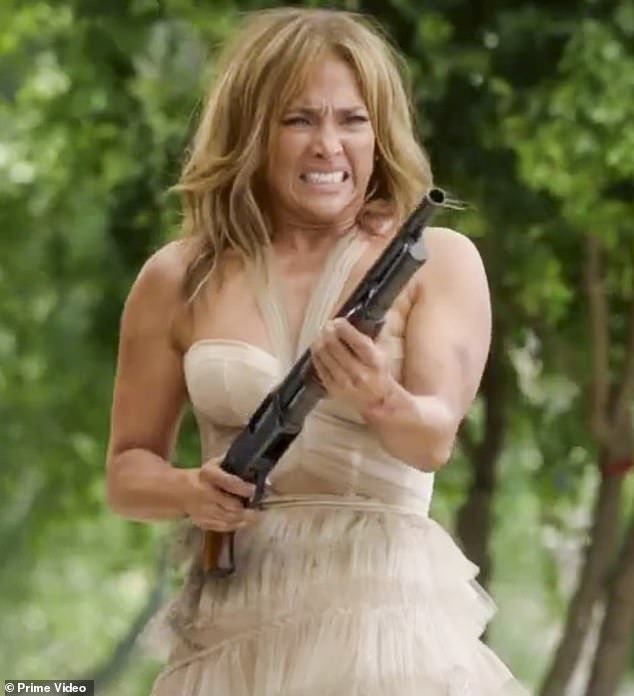 Superstar: She was unveiling her new romantic comedy Shotgun Wedding, about a marriage ceremony that turns into a hostage crisis

‘A month before, and I don’t know if you guys know this, but 20 years ago we were supposed to get married.’

‘And it kind of all fell apart back then and this time, I absolutely had a little PTSD and I was like ”is this happening?”,’ Jennifer said. ‘We were so happy, but I just felt the wedding was so stressful and one day Ben just said, ”’F*** it, let’s just go to Vegas and get married tonight.’ 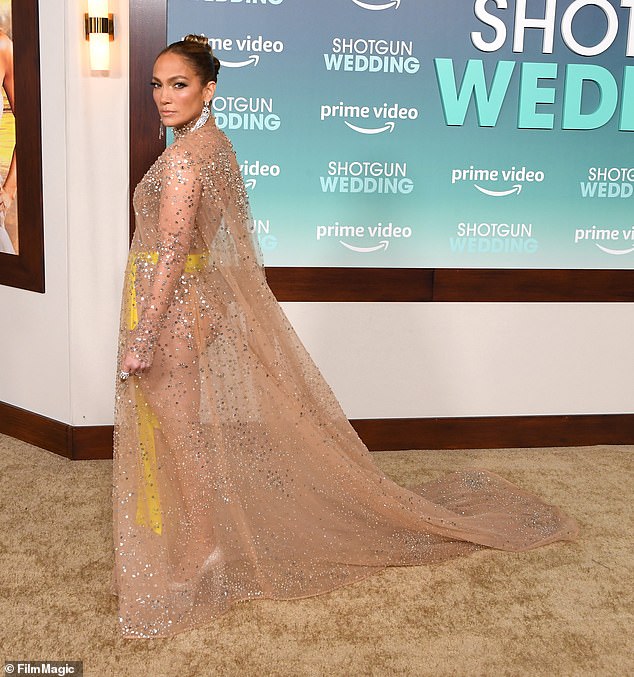 Incredible: Earlier that evening, Jennifer dazzled in a sheer nude gown with a dramatic cape and silver sequins as she attended the premiere of her latest film

Jennifer said it was the same day that they had just had a big wedding planning meeting and she also had a rehearsal that same day for her show.

‘He was like ”go to rehearsal when you get back here I’m going to have everything all set up”,’ Jennifer said.

She said that three of their kids were at camp but two of them were with them.

‘He’s like ”they are going to be our witnesses, let’s go, we are doing it tonight” and we did,’ Jennifer said. ‘It was amazing. It was the best night of our lives.’ 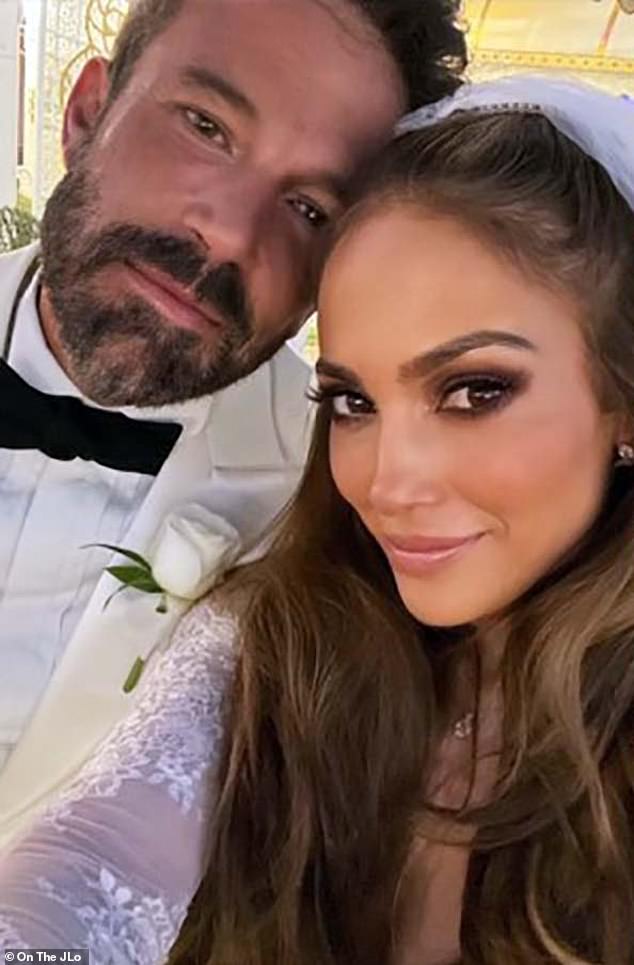 Quickie wedding: Jennifer also appeared on the late night show Jimmy Kimmel Live, where she gushed that eloping with Ben was ‘the best night of their lives’

Only Fools and Horses star Nicholas Lyndhurst is busy filming the Frasier revival this week, it has been confirmed - in his first...
Read more

Mid-Cap Funds: Should you invest in them?

Note that mid-cap funds are a highly volatile investment, as it invests in stocks of mid-sized companies.There are various types of investment options...
Read more

Article content (Bloomberg) — Oil traded near $71 a barrel after a three-week advance as the steady roll-out of coronavirus vaccines underpins an...
Read more

How New Businesses Can Get Their Name Out There

There are tons of businesses fighting for the top spot in consumers’ minds. As a new business, it can be hard to know where...
Read more