The Bachelors: Thomas Malucelli shows off his rig jogging in...

The Bachelors' Thomas Malucelli shows off his tanned physique as he...
Read more
Entertainment

And on Wednesday the former Dawson’s Creek star paid extra special attention to daughter Annabel when he posted a series of daddy-daughter snaps, while wishing her a very happy birthday.

‘9 years old today. 9 years of getting to live in the same house with sweet, loving kindness personified,’ Van Der Beek, 45, began the post, which was just the first of many loving compliments he heaped his little girl’s way. 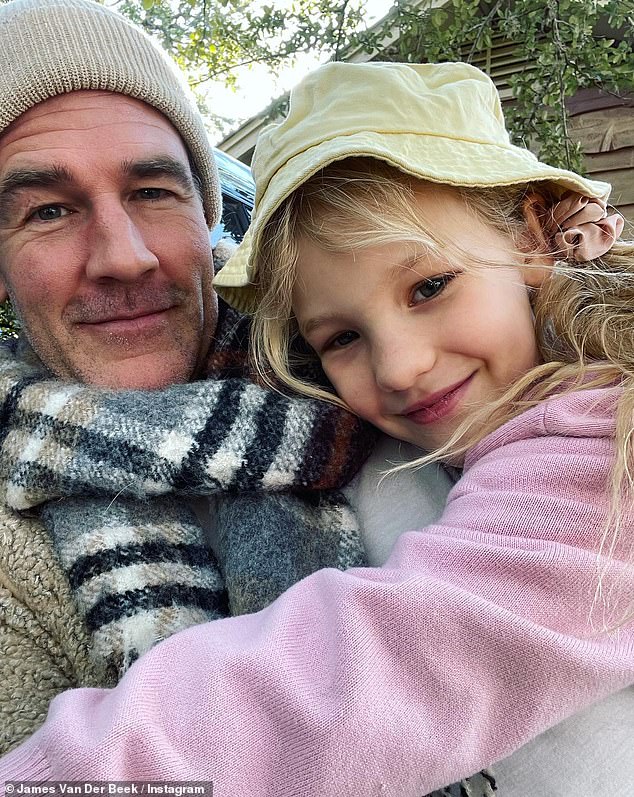 The Connecticut native, who left Los Angeles to raise his family on a spacious ranch in Austin, Texas in 2020, went on reveal that he ‘always knew’ Annabel was different from ‘the moment you came out.’

He also confessed to Annabel always being the winner of any kind of ‘Make Dad Laugh competition, no matter my mood,’ he continued in his birthday tribute.

‘Sensitive people can be a bit more vulnerable to what this world throws at them, but may you are always find refuge inside that beautiful, soft heart of yours,’ he said of his second oldest daughter, before adding, ‘fully confident that gift of your presence is enough to offer joy to whomever is near – IF people are open. If they’re not… it’s their loss, not yours.’

Sounding as if he had an extra bright twinkle in his eye, Van Der Beek concluded, ‘Keep shining, kid. Keep dancing, keep laughing, and keep expressing every feeling as it comes up for you. We’re here for ALL of it. I love you.’

Loving: The actor described Annabel as ‘sweet, loving kindness personified’ in his birthday tribute on Instagram 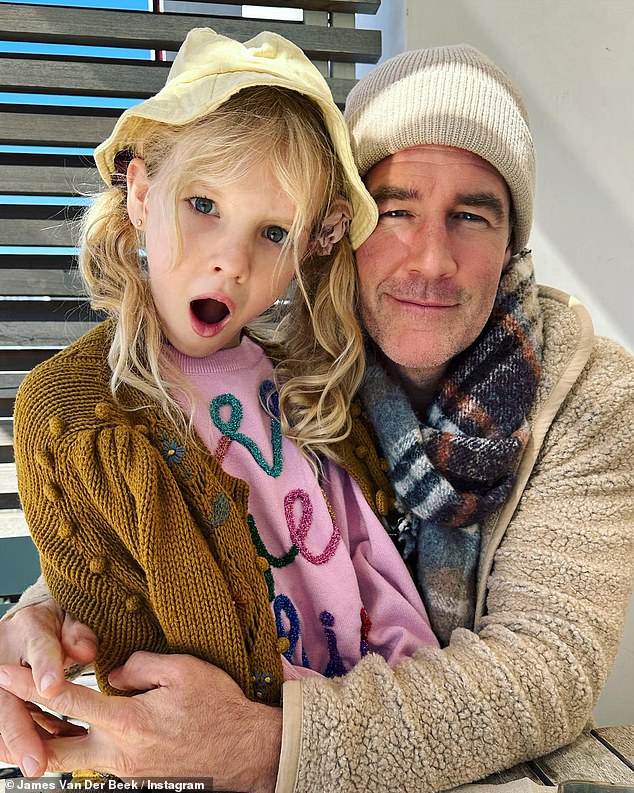 Fun: The birthday girl showed off her playful side by making faces towards the camera 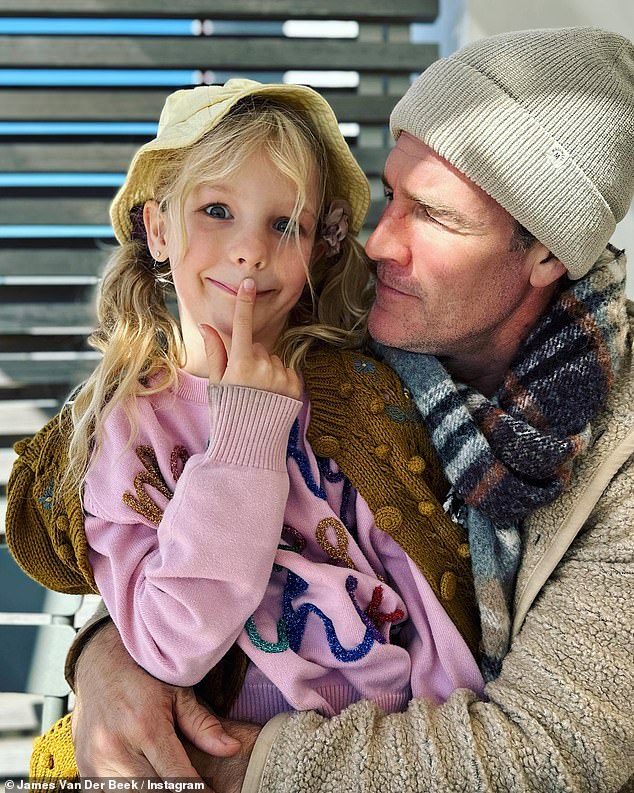 Show time; The blonde cutie also made a few funny faces as the camera rolled

The series of nine photos, one for each year of her life, all appear to have been taken at the Van Der Beek’s Texas ranch.

Nearly all of them show the proud papa with his arms lovingly wrapped around the adorable girl, while dressed for warmth in a brown furry coat and a flannel scarf around his neck.

He also donned a tan beanie cap over his short salt-and-pepper hair as he got playful with Annabel in the impromptu photoshoot.

Dressed in white sweatpants and a pink sweatshirt, Annabel returned the favor and showed off her playful side by opening her mouth open to make it look like she was startled. 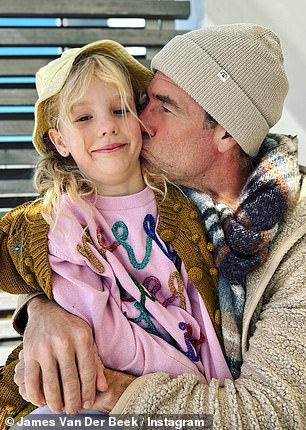 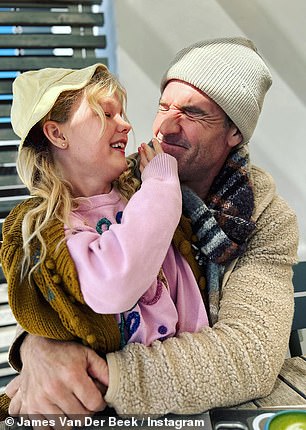 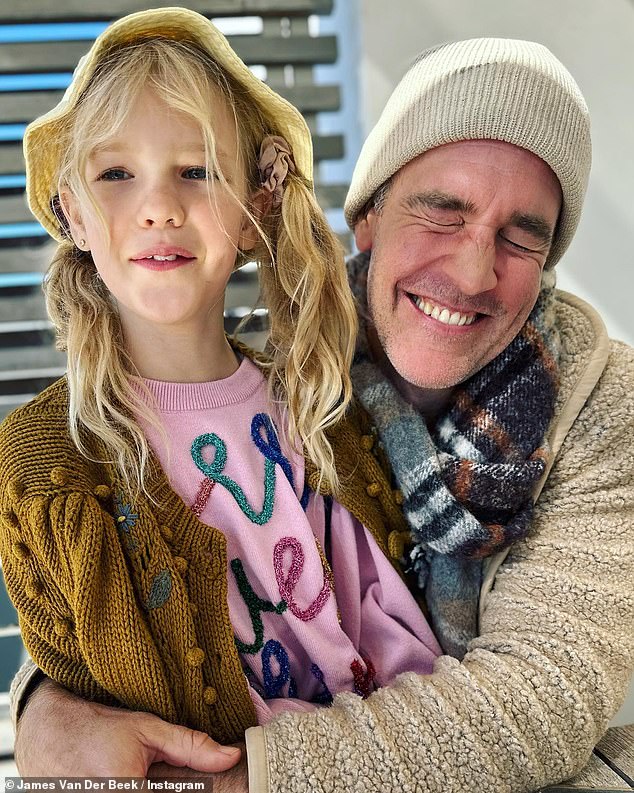 Smiles: Daddy and daughter both laughed it up during the impromptu photoshoot

There’s also where she made a funny face by bulging her eyes and putting her index pinger over her lips.

At one point, her dad came in to give her a kiss on the cheek, which she reciprocated by sticking her hand in front of his face.

In the one photo that didn’t include her father, Annabel can be seen sitting behind the wheel of the family car while staring to her left straight at the camera.

Her adoring mother took to her Instagram page and shared a photo of her husband strumming his guitar and singing to their daughter on Tuesday night, the day before her actual birthday. 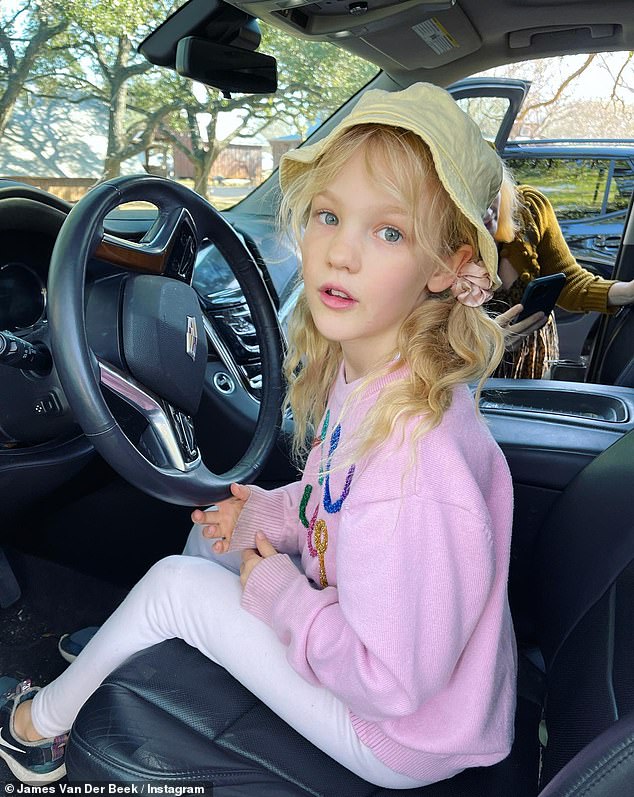 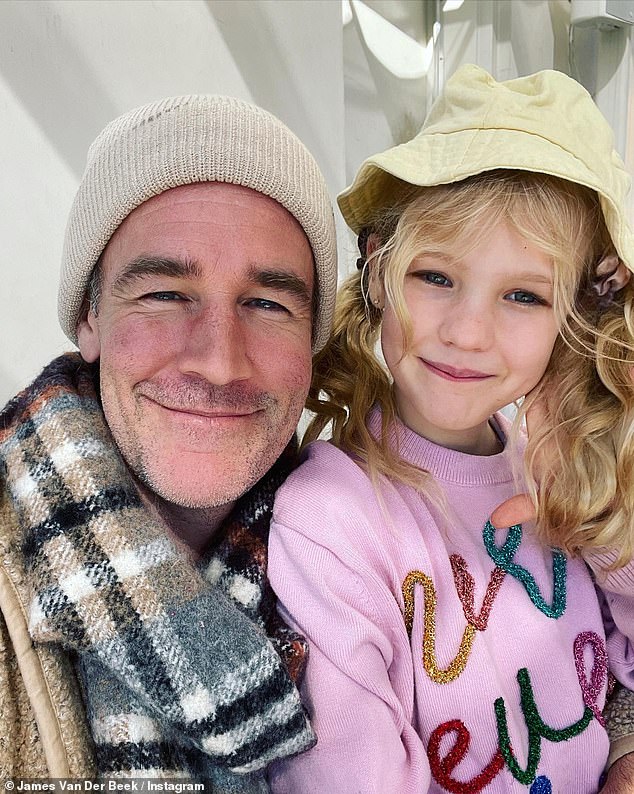 Southern trail: The photos all appeared to be shot at the Van Der Beek’s ranch in Austin, Texas

‘@vanderjames singing Annabel her good night song that he has sang to her since she was a baby on her last night as an 8 year old,’ she wrote across the bottom part of the picture.

Along with the birthday girl, the couple are also the proud parents of daughters Gwendolyn, four, Emilia, six, and Olivia, 12, and sons Jeremiah, one, and Joshua, 10.

The Van Der Beeks tied-the-knot back in August 2010, in a small ceremony at the Kabbalah Center near Dizengoff Plaza in Tel Aviv, Israel 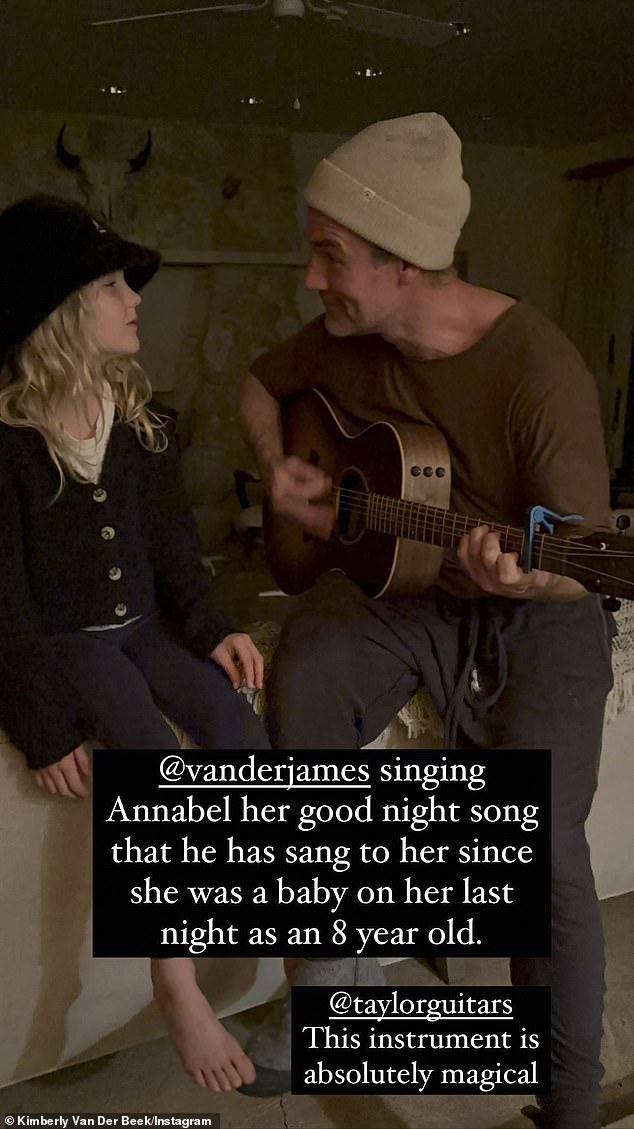 Special song: Annabel’s mother, Kimberly Van Der Beek, took to her Instagram page and shared a photo of her husband strumming his guitar and singing a good night song to their daughter on Tuesday night, the day before her actual birthday 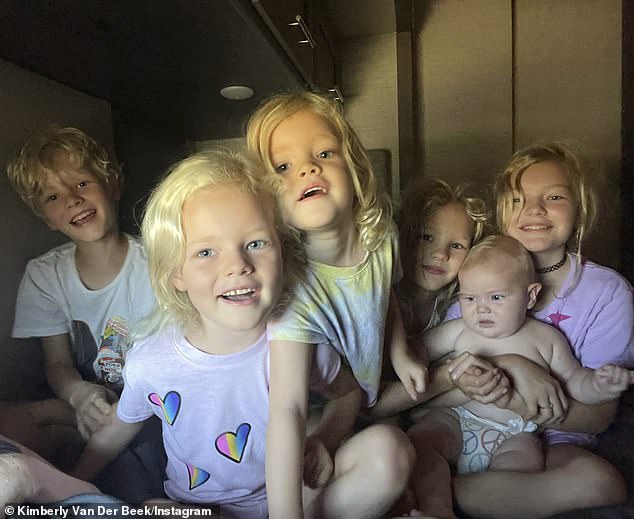 Family matters: Along with the birthday girl, the couple are also the proud parents of daughters Gwendolyn, four, Emilia, six, and Olivia, 12, and sons Jeremiah, one, and Joshua, 10

James and Kimberly made the decision to leave Los Angeles and move to Austin, in part, to bring the family closer to nature.

‘I know for me, it’s been really centering and I feel like for the kids, it’s been grounding, and a different kind of education that we never could have offered them in a classroom,’ Van Der Beek told People.

‘We love it. We have a lot more space,’ the Varsity Blues alum explained to Fox News Digital this past summer. ‘We all need a more immediate connection to nature. It’s been a really, really great move and the kids are really happy.’ 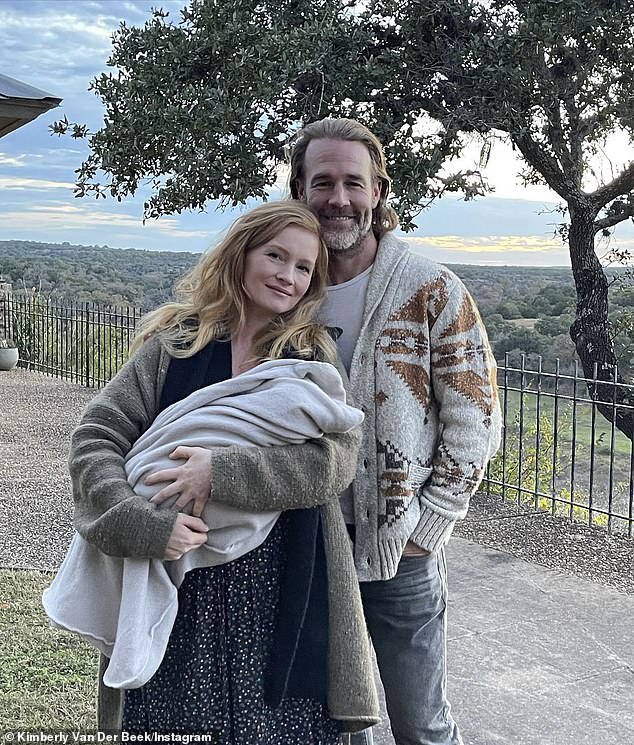 Going strong: The Van Der Beeks tied-the-knot back in August 2010, in a small ceremony at the Kabbalah Center near Dizengoff Plaza in Tel Aviv, Israel; they are pictured in November 2021

How To Choose The Best Mattress Pad And Mattress Cover

A mattress cover is a cover that protects the mattress from dirt and improves the quality of the bed. Cleaning it is difficult and...
Read more

Ways Lawyers Can Become More Effective In Their Field

Achieving success in any profession needs effort, determination, and most importantly how effectively you work to meet the expectations of your customers. If people have...
Read more

Things You Should Know About Pruritus

Itchy skin or pruritus is an uncomfortable sensation of the skin in which you want to rub your skin again and again, and the...
Read more

The bathroom is one of the most important rooms in your home, and it’s important to make sure that it’s a comfortable and functional...
Read more

If you rent a car, you can enjoy the extra features of your journey. Your renting car decision gives your parking capacity.
Read more
Business

5 reasons to for hiring managers to use aptitude assessments

You need all the help you can get to pin down the perfect hire. But how, exactly, do you accurately identify the right people...
Read more
Business

Comparing plans online will allow you to understand the perks provided by the schemes on the market, permitting you to make an informed purchasing decision by selecting the best fit.
Read more

The Bachelors: Thomas Malucelli shows off his rig jogging in Sydney

The Bachelors' Thomas Malucelli shows off his tanned physique as he...
Read more
Entertainment

They may be 'looking for love', but some of the stars of Married At First Sight have also made some serious money from...
Read more