Gisele Bundchen is at the center of a swirl of rumors about the status of her relationship with her hunky jiu-jitsu instructor Joaquim Valente, whom she has holidayed to Costa Rica with multiple times.

A source told People that ‘Gisele adores and trusts [Joaquim] and has been spending a lot of time with him’ but the duo are not in a ‘traditional dating scenario.’

The conjecture about Gisele, 42, and Joaquim comes after the supermodel finalized her divorce from NFL icon Tom Brady, whom she reportedly split from over his refusal to quit the sport. 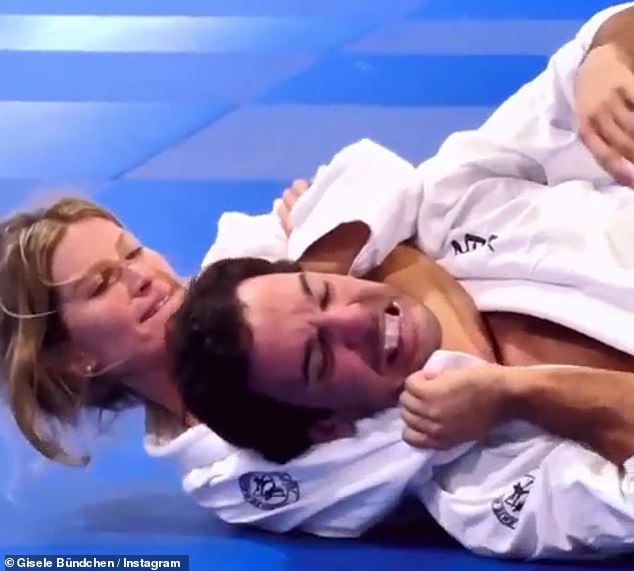 She adores him: A source says Gisele Bundchen ‘adores and trusts’ her hunky jiu-jitsu instructor Joaquim Valente but the two don’t have a ‘traditional dating scenario’

Now an insider has spilled that Gisele and Joaquim ‘have a deep personal relationship, and he is a teacher to her and the kids. Whether or not it will ever become more than that rests on the table.’

Another source declared Gisele was ‘happy and doing really well’ but was ‘focused on her kids, her health and work.’

Gisele and Joaquim were spotted together in Costa Rica last week just days before Tom’s Tampa Bay team’s disastrous 31-14 loss to the Cowboys on Monday – with the sportsman refusing to rule out retirement for a second time. 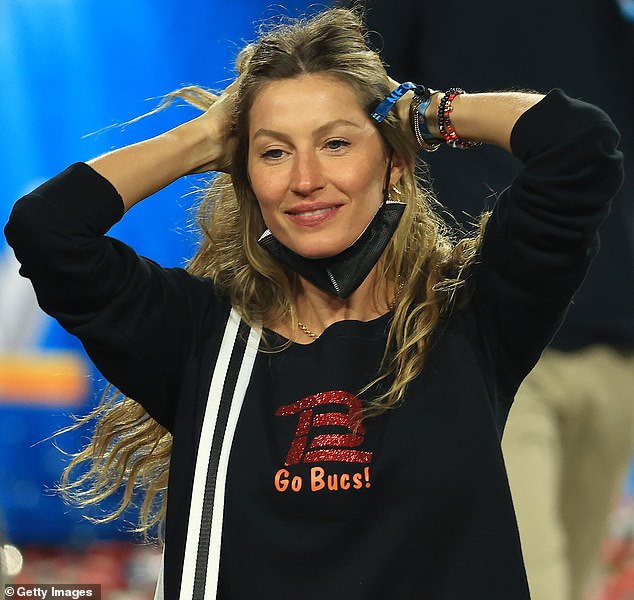 Potential: Gisele and Joaquim ‘have a deep personal relationship, and he is a teacher to her and the kids. Whether or not it will ever become more than that rests on the table,’ the insider added; Pictured 2021

During his latest sighting with Gisele, Joaquim wore a grey top and shorts as he joined the Vogue cover star for a run – two months after the pair were first spotted in the country alongside her two children with Tom – Benjamin, 13, and Vivian, 10 – which quickly sparked romance rumors between the pair.

However, a source close to Gisele furiously denied that they were in a relationship at the time, insisting that the date was anything but romantic – and maintaining that Joaquim was nothing more than a close family friend.

‘He’s been her kids’ jiu-jitsu teacher for years,’ the insider claimed. ‘There’s no truth to the rumors that they’re dating.’

Split: The supermodel, 42, reportedly split from NFL icon Tom Brady, 45, over his refusal to quit the sport (pictured 2019)

Gisele and Joaquim appear to go way back, and they even participated in a photoshoot for Dust Magazine together alongside Joaquim’s brothers, Pedro and Giu Valente, last year.

An insider recently told People that Gisele is ‘super charged about her career in the next few months’ in the wake of her divorce. ‘She is busy making decisions and feels happy and more settled than she has in a long time.’

Brady first retired in January 2022 while he was with the New England Patriots, but stayed away for a mere 40 days before announcing he would return to the Buccaneers for the 2022 season. Family: The couple share custody of their two children, Vivian and Benjamin. Tom also has a third son John, 15, from his relationship with Bridget Moynahan. They are shown in February 2022, after he announced he was retiring –  but he changed his mind a month later

The NFL superstar and Brazilian supermodel confirmed their split on October 28 following weeks of speculation.

Gisele filed for divorce because she felt her partner ‘wasn’t as attentive as he should’ve been.’

‘That’s what [Gisele] wanted: to be heard. And he wasn’t hearing her,’ the insider noted to the site.

As Bundchen, a native of Brazil, raised their two children — the athlete was ‘busy following his passion.’Brady also shares 15-year-old son Jack with ex Bridget Moynahan. 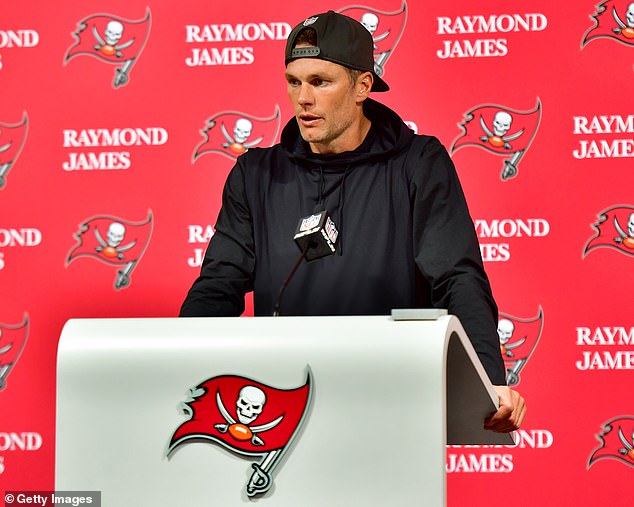 Round two? Brady’s team Tampa Bay Buccaneeers suffered a disastrous 31-14 loss to the Cowboys on Monday – with the sportsman refusing to rule out retirement for a second time

Someone familiar with the quarterback dished: ‘When he’s in the middle of a season, [Brady] does what most NFL players do: live, breathe, eat and sleep football,’ adding: ‘Tom is more like that than anyone.’

Another source countered: ‘He was always there for her and the kids. Even during football.

‘He’s an anomaly because he’s played for so long. Yes, he worked just like any parent worked, but he always spends a great deal of time with his family.’

Brady ducked questions on free agency and what the future holds for him on Monday, choosing to end his post-game media duties with a monologue praising reporters in the room.

‘I just want to say thank you guys for everything this year. I really appreciate all your effort,’ Brady said, following Tampa Bay’s 31-14 loss to the Cowboys. 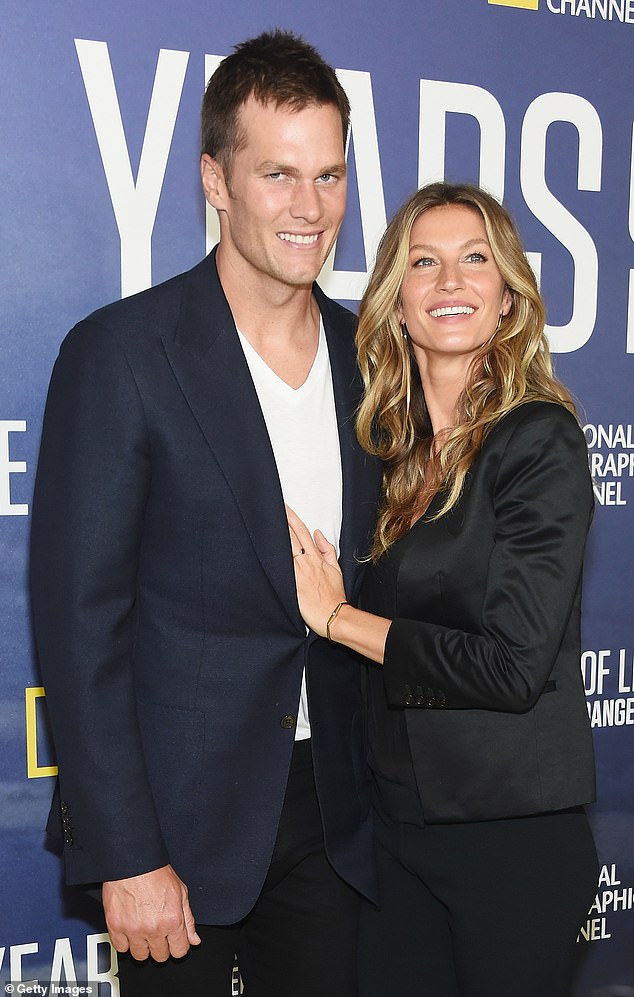 Marital issues: A source told People magazine that Tom ‘wasn’t as attentive as he should’ve been’ to Gisele before the split. They are pictured in September 2016

In a statement posted to Instagram, the athlete called his and Gisele’s decision to end their relationship ‘painful,’ but vowed to put their kids first so that they ‘receive the love and attention they deserve.’

Gisele added in a post of her own: ‘My priority has always been and will continue to be our children whom I love with all my heart.

‘We will continue co-parenting to give them the love, care, and attention they greatly deserve.

‘The decision to end a marriage is never easy, but we have grown apart. It is, of course, difficult to go through something like this.’

The supermodel concluded by stating that she ‘wished’ her ex ‘the best,’ and said she was ‘blessed’ for the ‘time they had together.’ 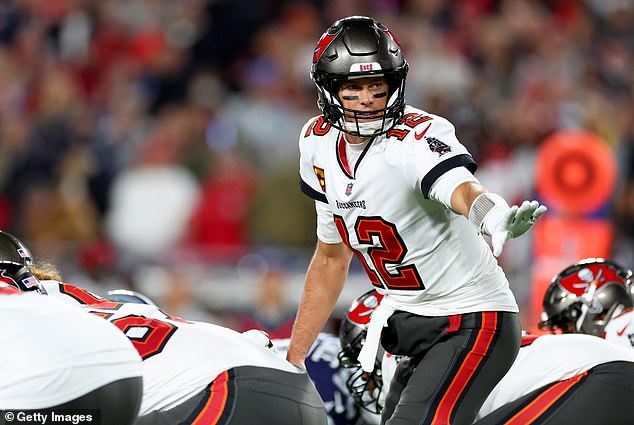 Facebook told employees on Tuesday that it was making some of its internal online discussion groups private, in an effort to minimize leaks.Many...
Read more

EDF, the French state-backed utility, said it was seeking to hold an extraordinary board meeting of its joint venture nuclear power plant in...
Read more

Michael Clarke is embroiled in a scandal after his current girlfriend Jade Yarbrough accused the former cricketer of cheating with his ex-flame Pip Edwards.Sensational...
Read more

4 Things To Consider Before Embarking On A Camping Road Trip

If you are hoping to explore nature this summer, your best course of action would be to hop in your car and embark on a camping road trip.
Read more
Business

The Best Way to Get Free Promo Codes for Your Favorite Website.

The world is your oyster. You can get anything you want, but you have to open up that shell and grab it with both...
Read more
Business

A recent survey shows that 82% of respondents have increased their use of outsourced business services since the onset of the pandemic. Most of them cited increased...
Read more