Jessica Rowe makes surprise career move by announcing she has...

Gary Beadle has revealed his wife Emma is currently in hospital having heart surgery to fix three holes in the organ as he told fans of the ‘difficult time’.

The Geordie Shore star, 34, discussed Emma’s operation with his fans as he explained it will take the mother of two three months to recover.

Gary and Emma, 30, who tied the knot last year, have two young children, Chester, five, and Primrose, two, and Gary promised to ‘hold down the fort’ at home. 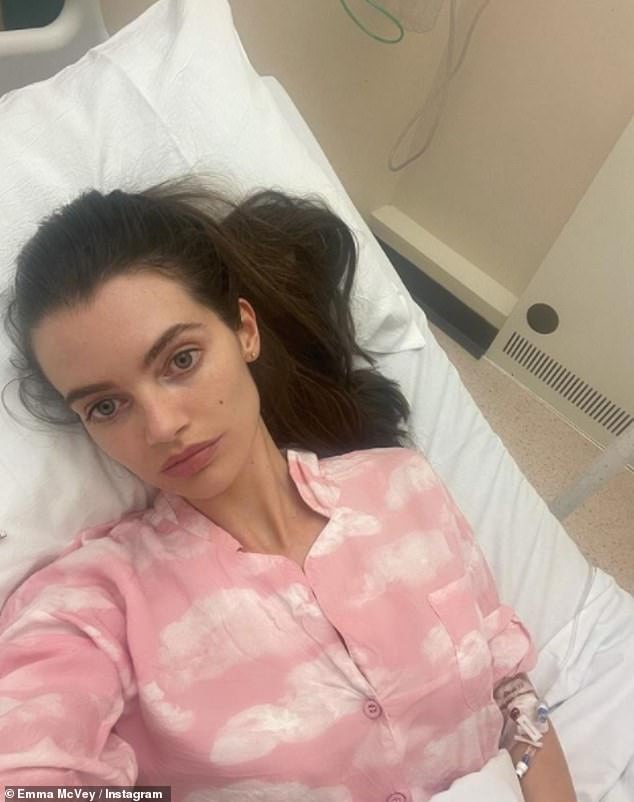 Health woes: Gary Beadle has revealed his wife Emma is currently in hospital having heart surgery to fix three holes in the organ as he told fans of the ‘difficult time’ (pictured in 2021)

‘Crazy what life throws at you sometimes. Big day for our family tomorrow.’

Later offering an update to his followers, Gary praised his wife for her dedication to their two little ones as she spends time away from them.

Gary revealed how Emma had entered hospital the night before and waited hours to get onto a ward but her only concern was for their children. 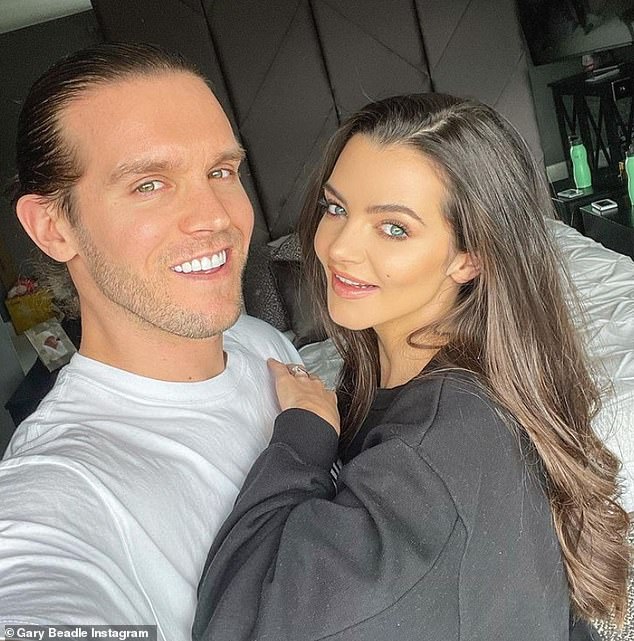 Struggles: The Geordie Shore star, 34, discussed Emma’s operation with his fans as he explained it will take the mother of two three months to recover

He said: ‘You know what shout out to all the mums, honestly Emma was literally waiting to go in at 7am this morning…

‘After we dropped her last night, and her only worry was the kids were ok and that they had found their treasure hunt surprises which she has planned everyday for them….

‘Mums are built different, nothing else matters, as long as their kids are happy..’

Gaz said: ‘I will hold the fort and update you all soon as I hear from the doctors that all has gone well. 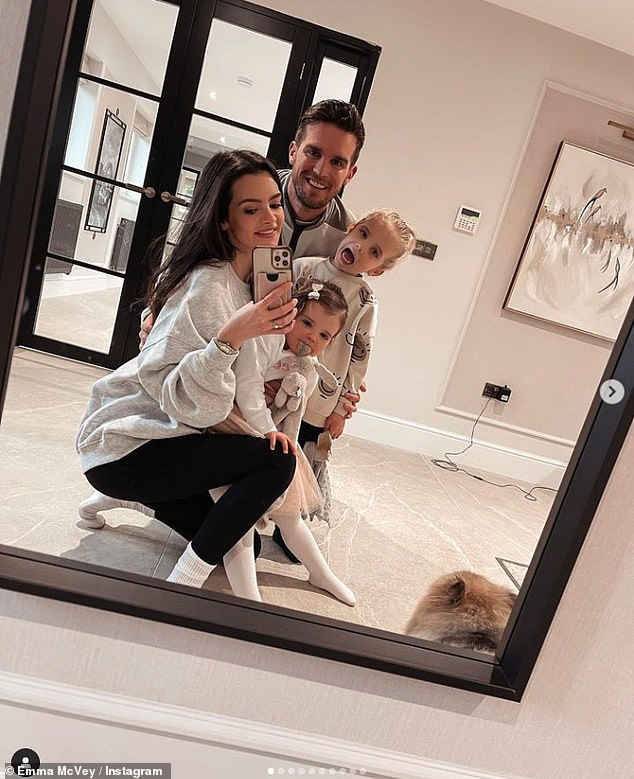 Family: Gary and Emma, 30, who tied the knot last year, have two young children, Chester, five, and Primrose, two, and Gary promised to ‘hold down the fort’ at home

‘Going to be a hard two to three month recovery but we got this as a family… thanks again for all the messages.’

In August, Emma spent the week in hospital after being rushed in.

The model shared a snap to Instagram at the time, as she donned a hospital gown, admitting: ‘My life has become turbulent and unpredictable’.

Emma did not share the reason for he visit at the time, but fans are aware she has suffered from a heart defect since birth and inflammatory condition colitis. 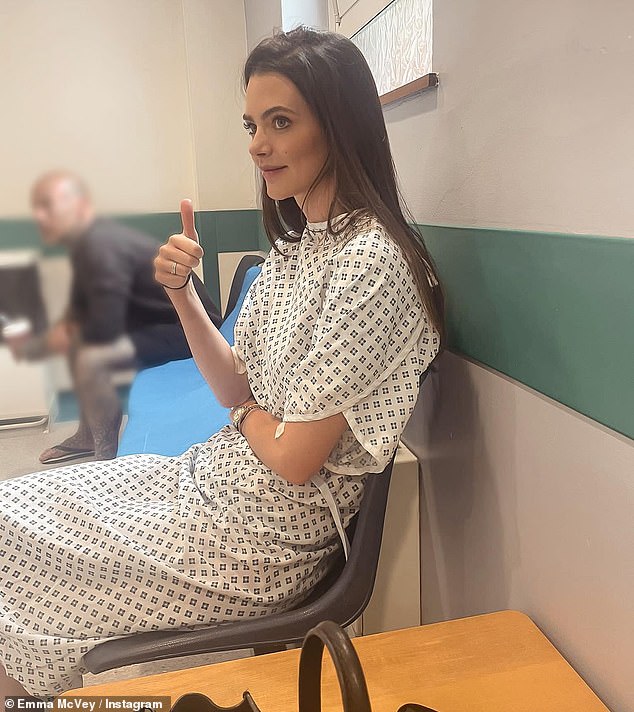 ‘Turbulent and unpredictable’: Gaz Beadle’s wife Emma, 29, has detailed her health woes while spending time in hospital ahead of her heart surgery – taking to Instagram to share a snap in a hospital gown

Detailing the tough time, Emma explained to her followers what she has endured in hospital.

Taking to the caption, she explained: ‘In the space of a week I’ve had gas and air, cameras inside me, called in for a chest X-ray whilst I’m sat having lunch, bloods and to start infusions, injections and one other thing that I can’t even remember because my head is constantly a shed.

‘I don’t show a lot of my life on social media, as much as people think I do. I think I’m trying to just deal with things myself and be present at all times with my babies. 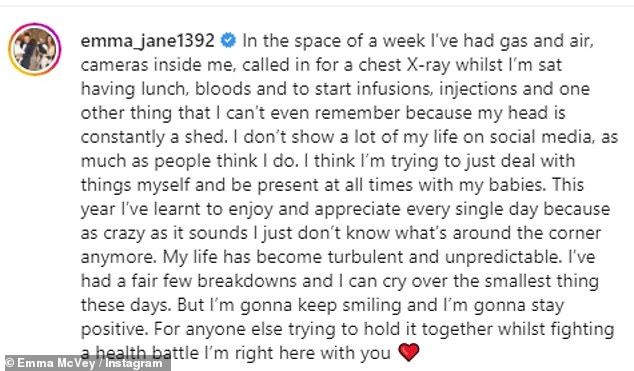 Opening up: Detailing the tough time, Emma explained to her followers what she has endured in hospital

‘This year I’ve learnt to enjoy and appreciate every single day because as crazy as it sounds I just don’t know what’s around the corner anymore. My life has become turbulent and unpredictable.

‘I’ve had a fair few breakdowns and I can cry over the smallest thing these days. But I’m gonna keep smiling and I’m gonna stay positive. For anyone else trying to hold it together whilst fighting a health battle I’m right here with you.’

She has previously spoken openly about her health woes, admitting that they have resulted in dramatic weight loss, and means she cannot carry another child without having heart surgery.

Explaining the situation in 2021, Emma shared: ‘I have three large holes in my heart and damaged tissue which is causing my blood to pass through the wrong direction, the right side of my heart is now enlarged and weak, along with high blood pressure in my lungs.

‘This has all got a lot worse as they should of been closed when I was a child, unfortunately no one checked my heart even when I had seizures and diagnosed with epilepsy or fainted like it was a hobby.’

Share
Facebook
Twitter
Pinterest
WhatsApp
Previous articlePip Edwards shows off her incredibly toned body in a bikini as she spends Australia Day at the beach
Next articlePamela Anderson says she gained 25lbs while writing her memoir Love, Pamela

Penn Badgley has revealed he was born two months prematurely, causing his heart and lungs to 'stop repeatedly' on a daily basis in...
Read more

NEERI scientist expect this testing technique to be beneficial for rural and tribal areas where infrastructure requirements are a constraint and trained lab...
Read more

In his view, speed, economy and reduced emissions can be achieved through cleaner fuels and new engines designed expressly for supersonic flight. This...
Read more

In this type of cyber fraud, hackers target a business’ phone system, commandeer numbers and drive up bills for both businesses and their...
Read more

Sometimes, your health takes a turn out of the blue. These changes often strike on weekends or other times when your doctor doesn't have...
Read more
Business

Every day is a new day and technology helps you to connect with your loved ones who live far away from you and buy...
Read more
Insurance

How do I get emergency financial assistance?

The article has published with the permission of  Get government Grants Emergency financial assistance can help you in difficult times. Presentation of this aid, the conditions...
Read more