At the end of its two-day policy meeting on Wednesday, the US central bank kept its main interest rate on hold at the rock-bottom range of 0 to 0.25 per cent, where it has been since the start of the pandemic.

But whereas in March, when most Fed officials predicted that current rates would be maintained until at least 2024, the consensus has shifted towards an earlier lift-off in 2023, signalling the central bank’s belief in a faster transition to a full recovery and tighter monetary policy. The Fed’s projections indicate at least two rate increases are expected in 2023.

“Progress on vaccinations has reduced the spread of Covid-19 in the United States,” the Federal Open Market Committee said. “Amid this progress and strong policy support, indicators of economic activity and employment have strengthened. The sectors most adversely affected by the pandemic remain weak but have shown improvement.”

The FOMC on Wednesday kept its asset purchases steady at $120bn per month — another feature of the exceptionally loose monetary policy introduced to fight the economic fallout from the pandemic. Officials are expected to have held initial talks on the timing and conditions of an eventual move to start reducing those bond buys, but the statement made no mention of a shift.

The process of reducing the Fed’s debt purchases, known as “tapering”, could be discussed for months before a move is made. The Fed has said the economy would have to make “substantial further progress” compared to last December in order for to start scaling back its extraordinary support for the economy.

While inflation has been moving above the Fed’s target of 2 per cent on average, its full employment goal has not been met. Some 7.6m fewer Americans hold jobs than in February 2020.

The Fed has stressed that its monetary policy guidance is not calendar-based but dependent on economic outcomes. Specifically, it said it would only raise interest rates if the economy is at full employment with inflation at 2 per cent and on track to exceed that level for some time. Nevertheless, while seven out of 18 FOMC members predicted in March a first interest rate increase in 2023, 13 did so on Wednesday. 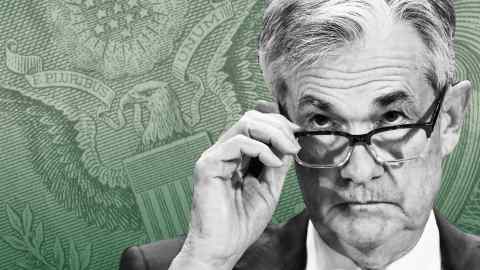 Since the last meeting of the FOMC in April, US equity markets have rallied, while borrowing costs have dropped from recent highs, as investors wagered that the Fed will keep its monetary stimulus going and this year’s inflationary pressures will be transitory.

US government bonds sold off sharply after the Fed announcement, with the yield on five-year Treasuries jumping 0.07 percentage points to roughly 0.85 per cent.

The more policy-sensitive two-year note traded 0.02 percentage points higher at 0.18 per cent, while the benchmark 10-year note lept more than 0.04 percentage points to 1.54 per cent. That is below the recent highs seen in March, but elevated from earlier in the week. Yields rise as prices fall.

The Fed also announced on Wednesday that it would adjust two technical rates, including the rate it pays banks on excess reserves they hold at the central bank. It raised the so-called IOER rate to 0.15 per cent, from 0.10 per cent. It also agreed to pay more than zero on the reverse repurchase programme, boosting the rate to 0.05 per cent.

Eligible money market funds and banks have clamoured to stash money overnight at the Fed as they have few viable, positive-yielding places to invest the enormous amounts of cash that has bolstered their coffers since the start of the year. The Fed said in a statement that the adjustments were aimed at supporting “the smooth functioning of short-term funding markets”.

Party’s high command will decide over participation in meetings of delimitation commission: PDP

The PDP on Friday said the party's high command will decide over the participation in the meetings of the delimitation commission but asserted...
Read more

Telehealth: AstraZeneca teams with Docon Technologies to digitise over 1,000 clinics in India

Valia further said that the initiative has the potential to also reach out to the rural and furthest corners of the country and...
Read more

Everything You Need to Know About FBISD Skyward

FBISD Skyward is an online student information system that allows parents and students to view grades, attendance, and other important information about the student's...
Read more
Business

What Are the Benefits of Using a Flat Cord Power Strip?

In many homes, power strips are essential since it is the bridge to allow the connection of multiple devices to share power. However, many...
Read more
Business

Systems authenticate and identify individuals and devices using digital certificates.  These certificates consist of a public key and a corresponding private key, which in turn...
Read more