The dollar strengthened and government bonds firmed ahead of Friday’s US jobs data that will be closely watched by rate-setters at the Federal Reserve.

The US dollar index, which measures the currency against its peers, edged up on Wednesday to post monthly gains of almost 3 per cent.

Investors also bought government debt, which — like the dollar — tends to rally when uncertainty causes investors to hold back from buying riskier assets.

The yield on the benchmark 10-year US Treasury note, which moves inversely to its price, fell 0.04 percentage points to 1.44 per cent at one point, before paring back slightly to settle around 1.46 per cent. Germany’s equivalent Bund yield dropped 0.03 percentage points to minus 0.20 per cent.

Economists surveyed by Bloomberg expect Friday’s non-farm payrolls report to show US employers added just over 700,000 jobs in June, up from 559,000 the previous month.

But fund managers have become reluctant to make big bets ahead of the jobs report since economists’ predictions for the April payrolls turned out to be wildly inaccurate and the one for May also came in significantly below forecasts.

“The jobs data has become very hard to predict,” said Ken Taubes, US chief investment officer for Amundi. “We’ve had professional economists getting it wrong in the hundreds of thousands.”

ADP’s national employment report on Wednesday showed US private sector employers added 692,000 jobs in June, down from 886,000 a month earlier but ahead of economists’ expectations for a 600,000 increase.

Michael Pearce, senior US economist at Capital Economics, warned the ADP survey had “completely missed the labour-shortage driven slowdown in payroll gains evident in the official figures” in recent months.

“So we would treat the survey with an even bigger dose of scepticism than normal,” he said. 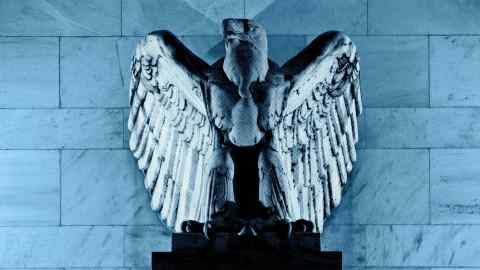 David Lefkowitz, head of equities at UBS Global Wealth Management, said a weak report on Friday may push back expectations around the Fed’s timeline to tighten monetary policy.

A majority of economists polled in the inaugural FT-IGM survey see a 75 per cent or greater chance of at least two US interest rate increases by the end of 2023, in line with the central bank’s so-called dot plot of individual projections.

On Wall Street on Wednesday the blue-chip S&P 500 closed higher by 0.1 per cent. The index’s gains surpassed 2 per cent in June, marking the fifth-straight month of gains.

The tech-heavy Nasdaq Composite, meanwhile, slipped 0.2 per cent, after notching a new record high this week. Across the Atlantic, the region-wide Stoxx Europe 600 slid 0.8 per cent.

Analysts have upgraded their 2021 earnings per share forecasts for companies by 15 per cent since January, said Citi, as businesses benefit from economies reopening and vaccine rollouts. Earnings expectations have increased the most for companies whose fortunes are linked to economic cycles, such as industrial groups and materials producers, Citi found.

But the prices of companies’ equity and debt instruments have already been lifted so high by this optimism that “everywhere you look there is nothing left in terms of value”, said Tatjana Greil Castro, co-head of public markets at Muzinich & Co.

“So now everything is about the Fed and how much liquidity they will continue to pump into markets,” she said.

Global oil marker Brent crude added 0.5 per cent to $75.13 a barrel, trading around its highest point since April 2019 as buyers shrugged off concerns about the spread of the Delta variant of Covid-19 to focus on a drop in US oil stockpiles.

Robert Armstrong dissects the most important market trends and discusses how Wall Street’s best minds respond to them. Sign up here to get the newsletter sent straight to your inbox every weekday

That’s far from the only perk offered by The Zebra during the pandemic, Kujanek said. He has taken advantage of a $100 monthly...
Read more

How to Improve Your Written and Oral Business Communication Skills

If you want to be a successful business person, you'll need to be able to communicate effectively with others. This will involve both written...
Read more

How many hours have you spent watching the episodes of Shark Tank? Whenever you watch the show, the juices start flowing, and you feel...
Read more
Business

Austin Morell Training is a wonderful company that goes above and beyond for their clients. The fitness trainers downtown miami we have are wonderful...
Read more
Business

Recruitment agencies work in multiple markets. They have an extended reach that your small business alone can not have.
Read more

Shutters, Blinds, and Window Coverings- Which Should You Choose

Benefits of Types of Different Window Treatments Your windows are some of the delicate areas of the house. Getting the right ones can be the...
Read more
Home Decor

Hidden Electrical Outlets The invention of electricity has been very crucial for mankind. Our whole existence these days revolves around electricity and electronic gadgets. Be...
Read more

Garage doors have been an essential part of every home for decades. They are the largest moving object of the average home,
Read more
Lifestyle

If you're looking for a stylish and functional pair of shoes to wear to work, Chelsea work shoes are the perfect option. They are versatile and can be dressed up or down, depending on the occasion. Additionally, the
Read more
Lifestyle

3 Questions You Must Convey To Your Special Needs Babysitters

Every individual is a specially crafted piece of god. But children have always been cherished for their innocence and the positive aura.
Read more

What is an Unlock Apple ID? Are you looking to unlock the iCloud which is locked and you are seeking a way to unlock, you...
Read more
Technology

An Introduction to 5G Networks and IoT

What is IoT? IoT stands for “Internet of Things”, which describes a system of physical devices that are connected through the Internet. These...
Read more
Business Timenow
Go to mobile version