By Kenzi Devine For Mailonline

Ekin-Su Cülcüloğlu left some viewers hot under the collar on Sunday evening with her debut Dancing On Ice performance.

The former Love Island star, 28,was seen recreating her famous crawling scene from the ITV2 show, with host Holly Willoughby dubbing the routine the show’s ‘sexiest dance ever’.

But it didn’t seem to go down so well with everyone, as the competition show received over 100 Ofcom complaints following the routine – and the Turkish beauty found herself with the least amount of public votes. 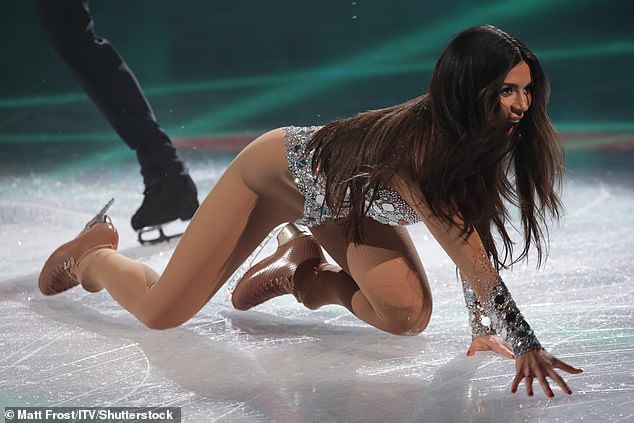 Ekin-Su was among the first batch of celebrities to take to the ice in the debut episode, dancing with partner Brendyn Hatfield.

But the performance didn’t quite go down the way she was hoping, with Ofcom receiving 112 complaints from the public following the episode.

She certainly brought some fire to the rink, stepping out in a nude mesh unitard with a dramatically embellished detail.

The actress crawled across the ice during the performance, an ode to the famous Love Island scene, in which she crawled around the villa’s terrace to kiss fellow islander Jay Younger behind partner Davide Sanclimenti’s back. 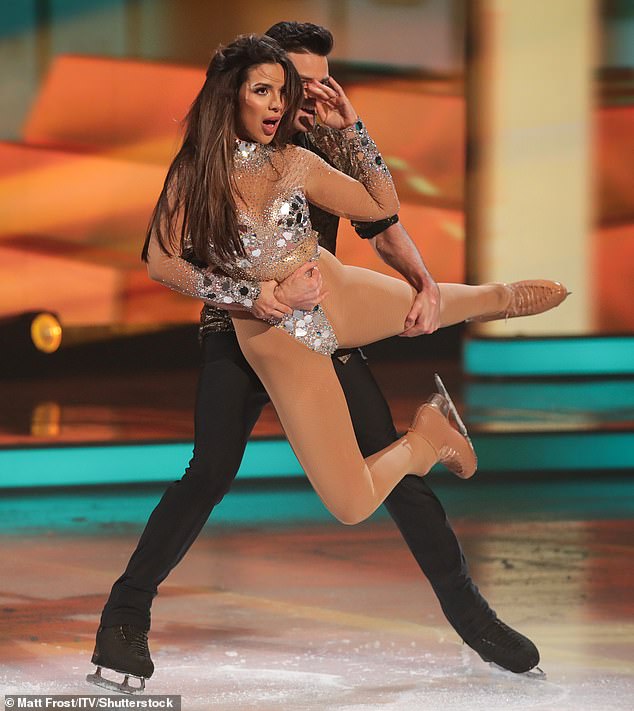 Debut: Ekin-Su was among the first batch of celebrities to take to the ice in the debut episode, dancing with partner Brendyn Hatfield 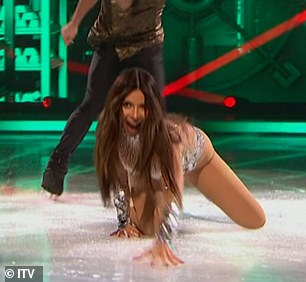 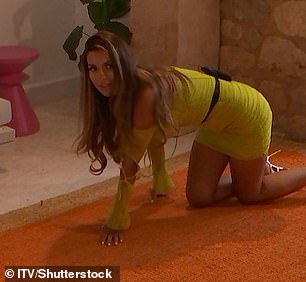 THAT crawl: The actress crawled across the ice during the performance, an ode to the famous Love Island scene (right)

While the sultry routine also saw her lie on her back and be swept up into partner Brendyn’s arms, with a slew of animated facial expressions.

Ekin-Su and Brendyn were marked middle of the leaderboard by the judges, who gave a score of 21.5.

And while they agreed that the star certainly had sex appeal, they were hoping for a little more skating. 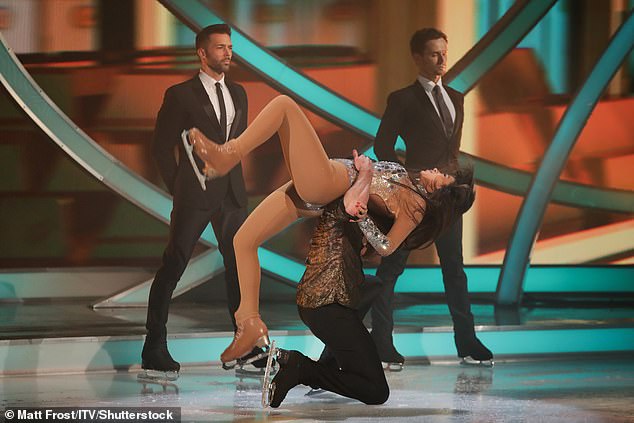 Steamy: While the sultry routine also saw her lie on her back and be swept up into partner Brendyn’s arms, with a slew of animated facial expressions

‘It was very sexy. But what I want more of is the skating,’ shared judge Jayne Torvill. Ashley was in agreement as he said: ‘Skate on your own without holding on to Brendyn, show us what you can do.’

Many viewers also took to social media to brand the routine ‘not appropriate’ for the family show, which airs before the watershed.

But the performance was a hit with Ekin-Su’s boyfriend Davide, who sat in the audience and teased that he ‘couldn’t wait’ to take her home.

Later in the show, the public vote revealed that the Love Island star received the least amount of public votes and will face a skate-off in next week’s show, alongside one other star. 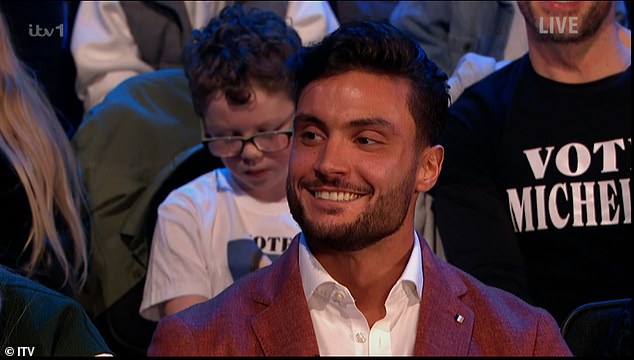 A fan: But the performane was a hit with Ekin-Su’s boyfriend Davide, who sat in the audience and teased that he ‘couldn’t wait’ to take her home 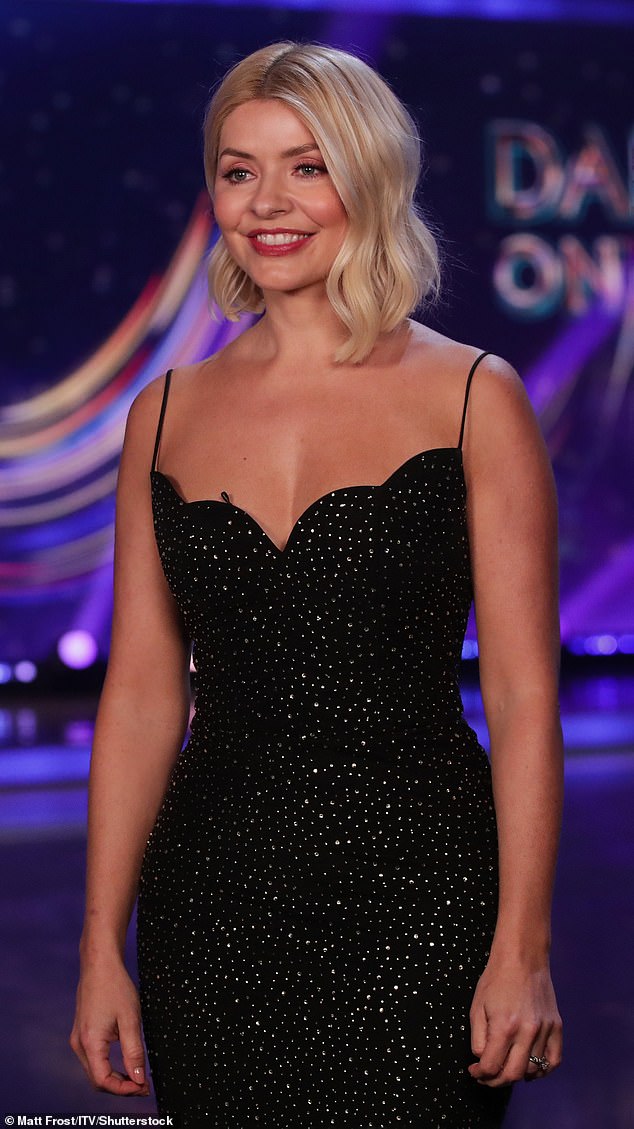 He said: ‘I was there watching her live from the audience, I think she’s doing well, obviously not just because she is my girlfriend.

He continued: ‘It is good for her because she will push herself even though she was sad for a few hours at first. The end of the day, this is the show it’s how things go.’

DANCING ON ICE 2023: MEET THE CONTESTANTS

WHAT DID THEY SAY?:  ‘I’ve turned it down before because I was terrified, but when I turned 50 I made a pact to get out of my confront zone. ‘

WHAT DID THEY SAY?:  ‘I’ve got some amazing news to tell you. I’m so excited, I can’t wait to get myself on the ice and skate. Stay tuned and see you on the ice.’

WHAT DID THEY SAY?: ‘I’ve not got the best coordination so when people find out they will laugh, but I don’t want to spend my life saying “I can’t do this, I can’t do that.”

WHAT DID THEY SAY?: ‘I’m so excited. I wanted something in my life with structure and it’s more serious than what I usually do.’

WHAT DID THEY SAY?: ‘I’m so excited that I get to learn how to dance…on ice! I’m terrified but can’t wait – I just want to make the most of this whole experience.’

WHAT DID THEY SAY?: ‘I want to learn how to skate and make my family proud of me and put on a show for everyone to see.’

WHAT DID THEY SAY?:  ‘I am definitely in it to win it.And this may be one of the scariest things I’ve ever signed up for but I couldn’t be more ready for the challenge!’

WHAT DID THEY SAY?: ‘I’ve not done much ice-skating but I am so excited for the opportunity. I’m so excited to get into that routine and to feel like an athlete again.’

JAMES LEE WILLIAM AKA THE VIVIENNE

WHAT DID THEY SAY?: ‘To be the first drag artist to take part in one of the big UK reality competition shows is an honour and a big step forward for queer representation on TV.’

WHAT DID THEY SAY?: ‘I’ve got giant feet, I don’t skate and I can’t dance. My family has already made bets – they’re making bets that I’ll fall on the first episode!’

WHAT DID THEY SAY?: ‘I’ve always wanted to do it but I know I would never have been able to complete anything because of the way I was 18 months ago, so I’m really truly grateful that I’ve got it this year when I’m a lot stronger.’

Angela Bassett, 64, is FIRST star to be Oscar nominated for a Marvel movie

Bo Burnhan’s Inside: Why I’m still hopelessly obsessed with the Netflix special

No smooth ride in the journey to launch Bolt

Markus Villig started Bolt, the Tallinn based ride-hailing company in 2013 when he was 19. Seven years later, his company is worth €1.7bn.It...
Read more

How to Ensure Road Safety While Driving Across Streets of Paradise, Nevada?

You must follow all road safety rules while driving across the streets of Paradise. Negligent driving and road accidents result in loss of life...
Read more

Summer vacations are here, and it's a great time to try fun things with your family. Holidays are that time to bond with your...
Read more

Check out these 5 secrets to make your employees happy.  Making employees happy is hard. It requires considerable time, effort, and consistency to see results.  The...
Read more
Business

Why Enterprise Security Is Important for Businesses in the US?