‘Stunning then, stunning still’: Coco Austin, 43, shares a throwback snap in a tiny bikini from 21 years ago when she met her husband Ice-T, 64

By Trevin Lund For Dailymail.Com

Coco Austin shared an impressive throwback photo of herself from about 20 years ago, around the time she met her famous rapper husband, Ice-T.

The 43-year-old TV personality shared the snap with her 3M Instagram followers on Thursday with the caption, ‘Looking at photos around the time period of when I met Ice…Me at 22.’

The mother-of-one showed off her younger physique in a tiny lime-green bikini and inscribed the image, ‘stunning then stunning still.’ 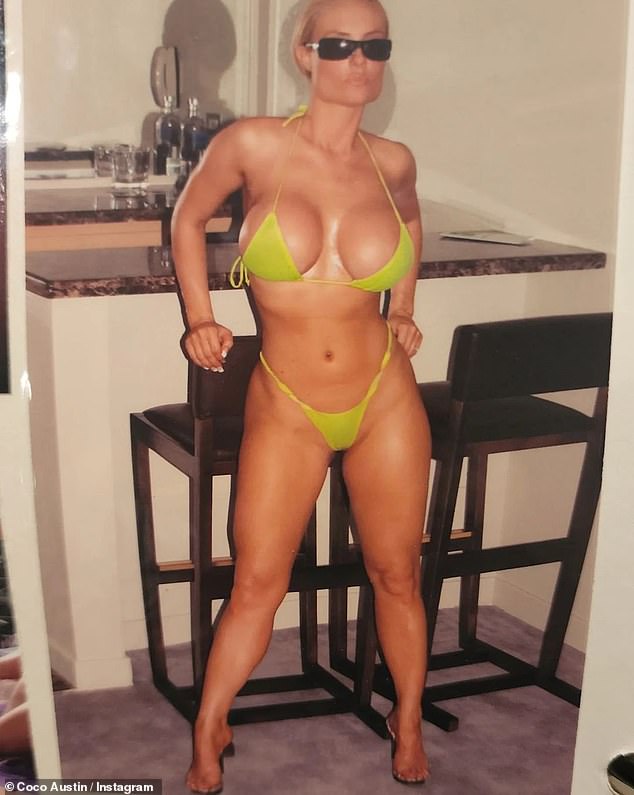 Impressive throwback: Coco Austin, 43, shared a picture of herself with her 3M Instagram followers from when she was 22-years-old on Thursday

The actress put her curves on display in a barely there two-piece as she posed with her arms on the back of a chair in dark glasses.

The natural beauty went makeup free, wore her blonde hair pulled back, and added clear high-heels for a finishing touch.

In November, during an emotional appearance on Tamron Hall, Coco broke down in tears as defended her parenting skills and addressed the constant criticism she faces from online trolls.

Coco (born Nicole) has been frequently hassled by mommy shamers for everything from how she dresses around her seven-year-old daughter Chanel Nicole Marrow to breastfeeding, strollers, kitchen sink baths, and more. 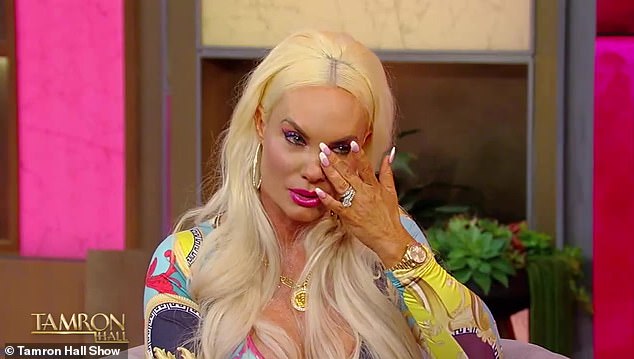 Emotional:Coco broke down crying during her appearance on Tamron Hall in November where she defended her parenting skills 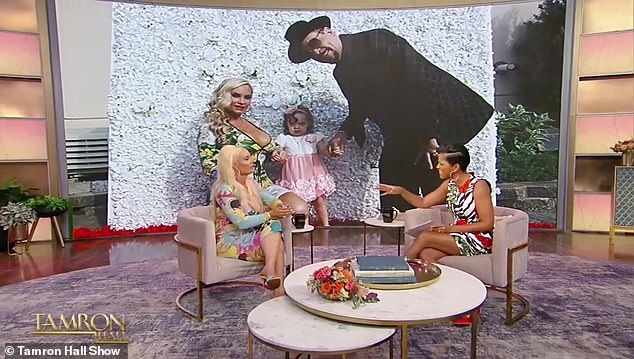 Criticism: The doting mother is frequently trolled by mommy shamers who also recently criticized her daughter for how she danced during a Christmas video

Three weeks ago, Austin was criticized again after her daughter was twerking in Christmas pajamas during a TikTok video their whole family made together.

The doting mother defended her daughter by explaining she was doing the dance of Tina Belcher from the show Bob’s Burgers. 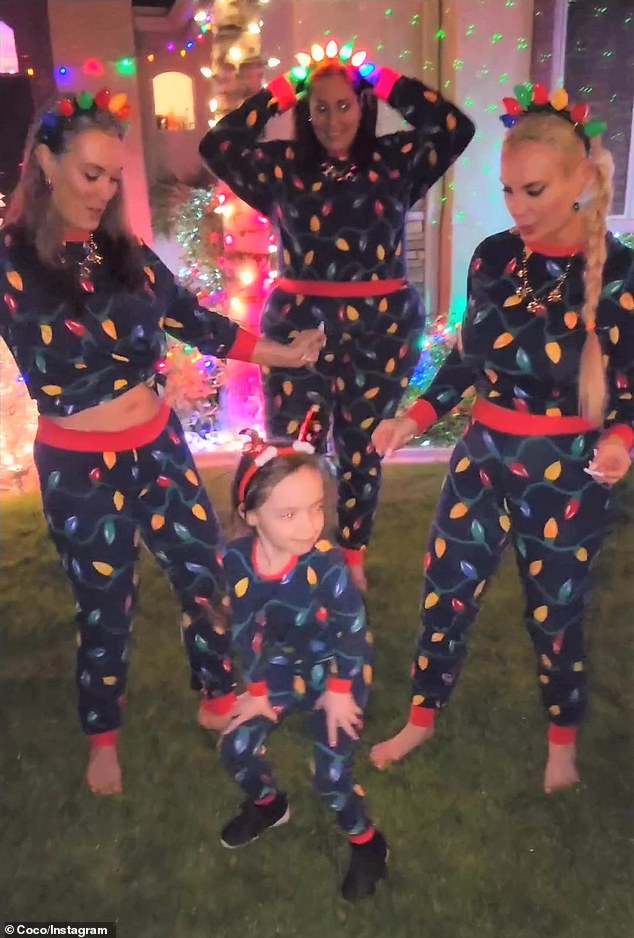 Busting a move: Chanel, seven, started dancing in the middle of her family’s TikTok video

The character is famous for doing the same dance move on the show that Chanel does in the video.

Coco wrote, ‘Gotta love family time! The adults in our family were doing a TikTok and Chanel runs out in the middle to bust a move to make us laugh.. She loves to joke.’

Her whole family was dressed up in matching pajama sets with Christmas light designs on them. 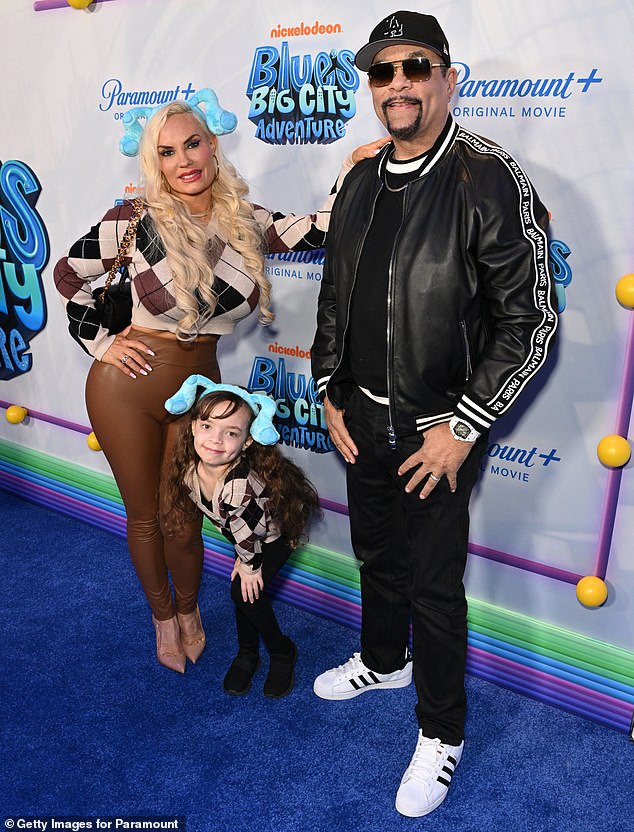 Family time: Coco and Ice-T were seen with their daughter, Chanel, as they attended Blue’s Big City Adventure premiere in NYC in November 2022

Coco and Ice-T officially tied the knot in 2002, and welcomed their daughter, Chanel, in 2015.

The couple notably starred in their own reality show, Ice Loves Coco, which aired on E! from 2011 until the show’s cancellation in 2014.

A simple rule to write important stuff is to write it down somewhere that we can use it later. It's important to document...
Read more

Season 5 of High School DxD has been confirmed, with a release date and leaks set for 2021

Since the release of High School DxD, we've all adored it. That is something that no one can deny. This sitcom is one of...
Read more

5 Companies Betting On AI As The Future

Two technologies are now making great strides in changing the world as we know it: blockchain and AI (Artificial Intelligence) They’re driving the...
Read more

Is it possible to get car insurance for a week?

It is generally possible to get a non-permanent car insurance policy. Nowadays, many policies get advertised as 7 days auto insurance or even single-day...
Read more
Business

Has the pandemic changed the way you think about your company’s workspace? Many workers are switching to a remote-first model. As a result, some...
Read more
Business

Wearable devices, born in early 2014, promised a great revolution: the ability to surf the internet, monitor your notifications and physical activity without the obligation to use a smartphone.
Read more