When the house lights go down, there are wild shrieks and screams from the audience. I doubt they get much of this sort of behaviour at the Royal Shakespeare Company – but we are in the presence of pop royalty, for goodness sake.

Cheryl Cole’s theatrical debut in the play 2:22 A Ghost Story is her first public performance for over two years. Save for the odd Instagram photo to plug the wellness brand she endorses, she’s been a positive recluse.

The first scene shows an open-plan living area and Cheryl, in jeans, up a step ladder painting and taking swigs from a glass of red wine. She descends, cleans her paint brushes and steps on a child’s toy. She screams convincingly in pain and frustration – but before she actually steps on the toy. Bless!

Cheryl is palpably – but understandably – nervous. It’s a big moment for the girl who, in 2002, found fame as 19-year-old Cheryl Tweedy from Newcastle upon Tyne on reality TV show Popstars: The Rivals. 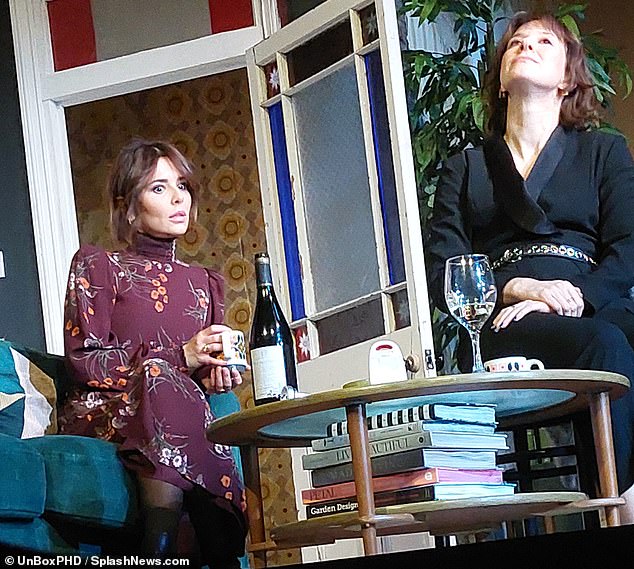 CLAUDIA CONNELL: Cheryl Cole’s theatrical debut in the play 2:22 A Ghost Story is her first public performance for over two years

She made it through to be selected as a member of Girls Aloud, which went on to become the UK’s biggest-selling girl group of the 21st century.

During the Noughties she was one of the most fascinating celebrities in the country. Not even her infamous 2003 conviction for assaulting a lavatory attendant in a nightclub or two messy divorces could halt her rise to stardom.

As a judge on The X Factor, Cheryl dipped in and out of the show for nine years. With her gorgeous Geordie accent and anguished face, moved to tears by whoever was singing I Will Always Love You that week, she became a national treasure. Funnily enough, it’s the same face she’s pulling on the promotional posters and billboards for 2:22 A Ghost Story.

After Girls Aloud broke up, she went on to have five number one solo singles but it’s been nine years since she released an album and nearly four since her last single Let You peaked at a lowly 57 in the UK singles chart.

So now, Cheryl, who turns 40 in June and goes by her first name, has reinvented herself.

In 2:22 A Ghost Story she plays Jenny, a neurotic 30-something mum who is convinced the new house she’s moved into with her incredibly unlikeable husband, Sam, is haunted.

The slick, supernatural thriller, written by Danny Robins, received good reviews when it opened in August 2021. From day one the production has relied heavily on what’s known as stunt casting – where a celebrity, often with little or no acting experience, is given a role in order to sell tickets. Now, it’s Cheryl’s turn and she’s rumoured to be earning up to £750,000 for her three-month run.

The first person cast as Jenny was pop singer Lily Allen, followed by I’m A Celebrity Get Me Out Of Here! winner Giovanna Fletcher and, most recently, ex-Love Island presenter Laura Whitmore. 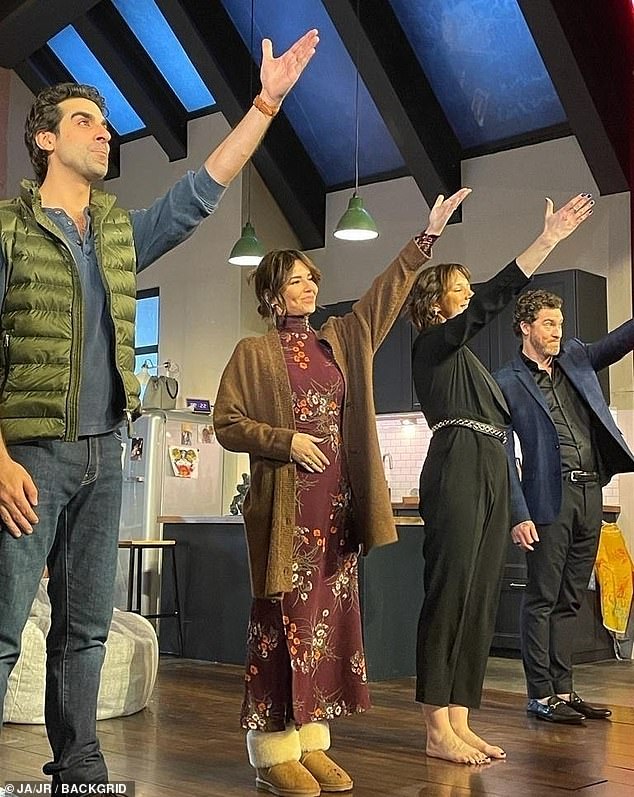 Mumbling and inflection aside, Cheryl rather holds her own in the performance

But back to Cheryl. Jenny has now changed into a slinky, floral maxi dress and is multi-tasking in the kitchen. She’s cooking a risotto, loading the dishwasher and chopping up salad for what’s about to be the world’s most stressful dinner party.

In the flesh Cheryl is tiny, like a little china doll. When she stands sideways on she almost disappears. While she’s undoubtedly been taking acting lessons, she’s certainly not gone ‘method’, if her dishwasher stacking is anything to go by – wine glasses in the plate compartment? Jenny!

The mother of a baby girl, Jenny is a middle-class yummy mummy, the sort you imagine shopping at Boden and posting about her lazy husband in the Am I Being Unreasonable? section of Mumsnet.

And as a sleep-deprived, stressed new mum Cheryl is excellent. She buzzes around her trendy kitchen like a whirling dervish. Maybe it’s a result of some excellent coaching. Perhaps she’s drawing on her own experience as a mother to son Bear, five, from her relationship with Liam Payne of One Direction, following her divorces from footballer Ashley Cole and French restaurateur Jean-Bernard Fernandez-Versini.

Jenny and her husband Sam (played by Scott Karim) are one of those many couples whose relationship has suffered since they became parents. They bitch and snipe at one another with Jenny using more profanities in her kitchen than Gordon Ramsay. I’ll say this for Cheryl, she’s a natural at the endless effing and blinding.

Her movements on stage are less natural – rather stiff, in fact – and there are times when I miss some of her dialogue. She also speaks with an irritating upward inflection where every statement sounds like a question.

Mumbling and inflection aside, Cheryl rather holds her own in the performance, as she tries to convince Sam and dinner party guests Lauren (Louise Ford) and Ben (Hugo Chegwin) there is something evil lurking in her house. 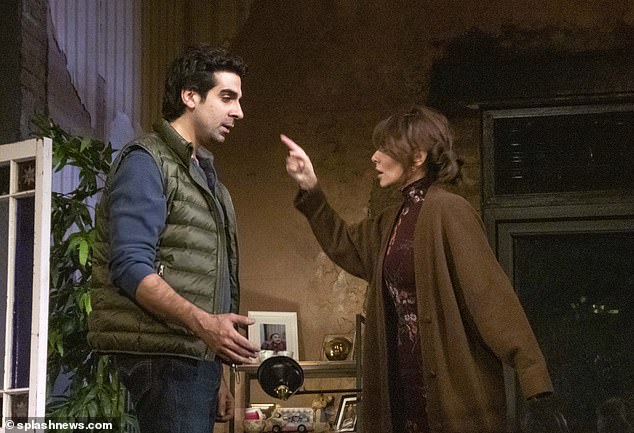 Cheryl is palpably – but understandably – nervous. It’s a big moment for the girl who, in 2002, found fame as 19-year-old Cheryl Tweedy from Newcastle upon Tyne

The crux of the play is that at 2.22 every night Jenny hears the sound of footsteps and a man crying over the baby monitor. Her husband believes there must be a rational explanation and her guests agree to stay until the fateful hour to witness the event for themselves. Jenny isn’t the most multi-faceted character either – she’s either whispering in fear or screaming in rage.

However, there is an emotionally charged scene in the second half where she confesses her fears that their renovation has angered a lurking ghost.

‘We’ve been so unkind to the house. We’ve stripped it, layer after layer of people’s stories,’ she shouts. And it is Cheryl’s finest moment in the play.

After two hours, the twist is revealed, the curtain comes down and the standing ovation feels inevitable (these are Chezza’s people, remember) although not entirely undeserved.

The consensus among the mostly female audience is that she did them proud… and they are desperate to know where that lovely maxi dress came from.

Suffice to say Olivia Colman and Jodie Comer won’t be feeling threatened but if Cheryl intends to launch an acting career then this is not a bad start.

Later in the evening I notice Cheryl is trending on Twitter. Is her performance creating a stir, I wonder? Sadly, it’s nothing to do with her West End debut, but rather people predicting that she is the mystery celebrity disguised as giant ball of wool on TV’s The Masked Singer.

difficulty Selling your house can be a monumental task. When making such a huge transaction, no detail is too small. To sell your property...
Read more

Buy an iPhone 13 or iPhone 12? How to decide what’s best for you

Roula KhalafFT editorThere are several superb books to recommend to readers this summer, including John Preston’s Fall, the fascinating tale of the rise and...
Read more

Sarah Michelle Gellar won't allow her daughter to appear on camera until she is 18 years old and no longer living with her...
Read more

Coolest cordyceps militaris benefits valuable There are various assortments of Cordyceps mushrooms all through the world. Two species, It militaris and Cordyceps Sinensis have...
Read more
Business

The dhow cruise is going there to meet your needs for the best times. The rate of the perfect types of moments are going...
Read more
Business

Trends in textile and apparel market have linked diverse traditions throughout the globe. Countries are coming ahead in textile trading and consumers are collaborating...
Read more