Cheryl clutches a bouquet as she leaves the theatre following her performance in Ghost Story: 2:22

Cheryl clutches a huge bouquet as she leaves the theatre following her performance in A Ghost Story: 2:22 amid positive reviews from critics

She made her big West End debut at London’s Criterion Theatre on Friday evening in the production of A Ghost Story: 2:22.

And a beaming Cheryl looked chic as she left another performance on Sunday following a whole host of positive reviews from critics.

The hitmaker, 39, kept warm in a camel coat and carried a large bouquet of flowers as she made her way through the crowd of fans. 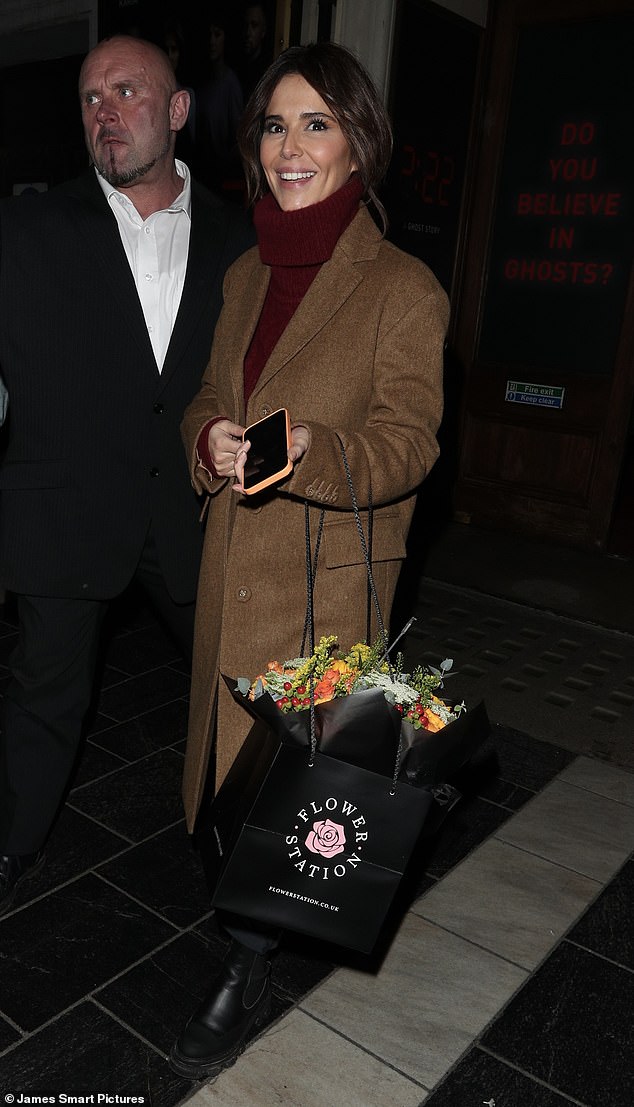 Star: Cheryl, 39, clutched a huge bouquet as she leaves the theatre following her performance in Ghost Story: 2:22 in London on Sunday

She layered the look over a burgundy polar neck sweater and slipped her feet into black boots.

The beauty looked glowing and sported radiant makeup with a slick of light pink lip while stepping out.

Cheryl, who plays Jenny in the spooky play, was clearly happy with her performance as she couldn’t stop smiling while out and about where she was escorted by her security team.

DailyMail’s Claudia Connell gave the production three stars and describe it as a ‘good start’ to Cheryl’s possible acting career. 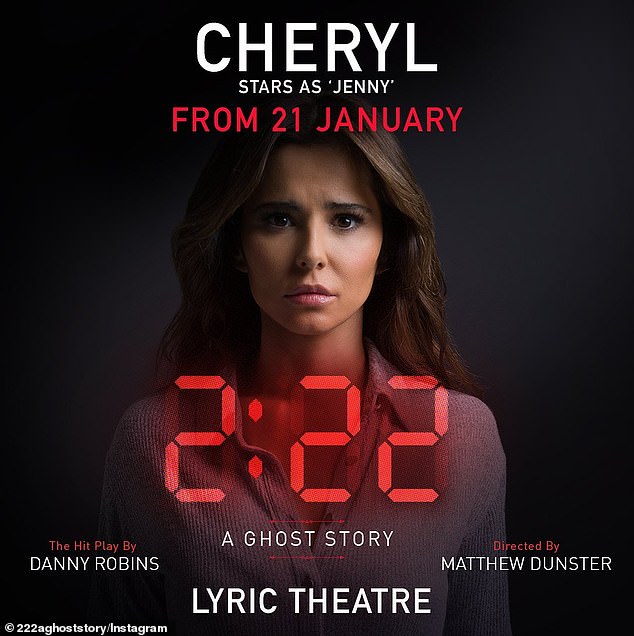 ‘Her movements on stage are less natural – rather stiff, in fact – and there are times when I miss some of her dialogue. She also speaks with an irritating upward inflection where every statement sounds like a question’.

‘Mumbling and inflection aside, Cheryl rather holds her own in the performance, as she tries to convince Sam and dinner party guests Lauren (Louise Ford) and Ben (Hugo Chegwin) there is something evil lurking in her house’.

Taking to Twitter, fans – who were lucky enough to get tickets – gushed about the former Girls Aloud star’s performance. 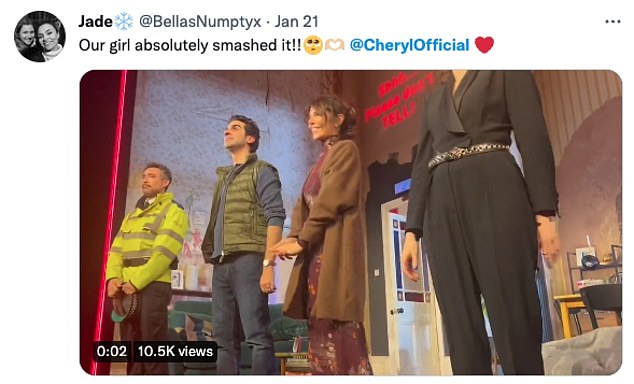 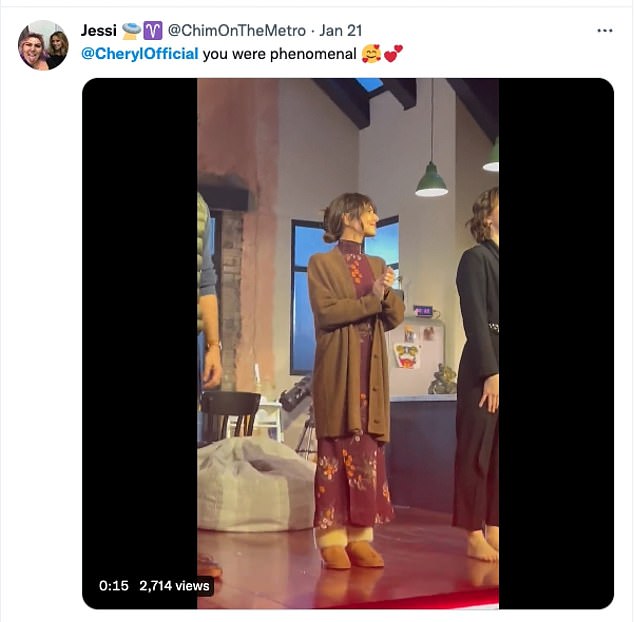 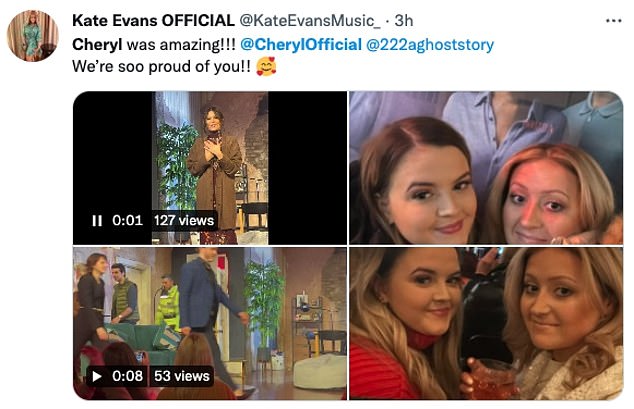 Loving it: Taking to Twitter fans – who were lucky enough to get tickets – gushed about the former Girls Aloud star’s performance

One wrote: ‘You are absolutely smashing this my g, so proud’ while another added: ‘Omg. That was awesome. Cheryl you were fab (so were you all) Thoroughly enjoyed’.

A third wrote: ‘Cheryl was amazing in 2.22 – I genuinely think she did a really strong acting performance’.

While more added that she was ‘Phenomenal’ and ‘amazing’ along with snaps of the star on stage.

On Friday the star took to the stage to kick off her three-month stint as the leading female role of Jenny, following on the role from stars such as Lily Allen and Laura Whitmore.

It comes as Cheryl hit back at reports that the show got off to a late start due to rehearsals running over time, leaving ticket-holders to queue outside in the cold as they waited.

As call time came, fans were allegedly left waiting with The Sun reporting that guests waited over 15 minutes for the late start.

However, a representative for Cheryl told MailOnline on Saturday: ‘The show started at 7.44pm and everyone was in their seat at this time.’

‘It was slightly delayed as it’s the first preview and it was completely sold out, so there was a lot of people to get into the theatre. Rehearsals did not overrun at all.’

The performance kicks off a three month stint for the star, beginning the new year off with a bang.

Which Is Better – Black Tea Or Green Tea?

Tea is a beverage that has been consumed for centuries. It is made by infusing the dried leaves of the Camellia sinensis plant in...
Read more

The Daily Worlds Newspaper: Read More About it

Welcome to the Daily World! Here we'll be delivering the latest news and trends in the world of transport, e-commerce, and technology. We'll also...
Read more

Emmerdale SPOILER: Nicky brutally REFUSES to have sex with Gabby

Emmerdale SPOILER: Nicky brutally REFUSES to have sex with Gabby despite...
Read more

How many hours have you spent watching the episodes of Shark Tank? Whenever you watch the show, the juices start flowing, and you feel...
Read more
Business

Systems authenticate and identify individuals and devices using digital certificates.  These certificates consist of a public key and a corresponding private key, which in turn...
Read more