And Bella Thorne was one of the starlets seen making her way around town ahead of the Deadline Studio event she attended at the Hotel Park City to help promote the new sci-fi film Divinity.

The actress and singer, 25, would eventually join four of her fellow cast members to discuss the new movie and the paths they took to get to Sundance. 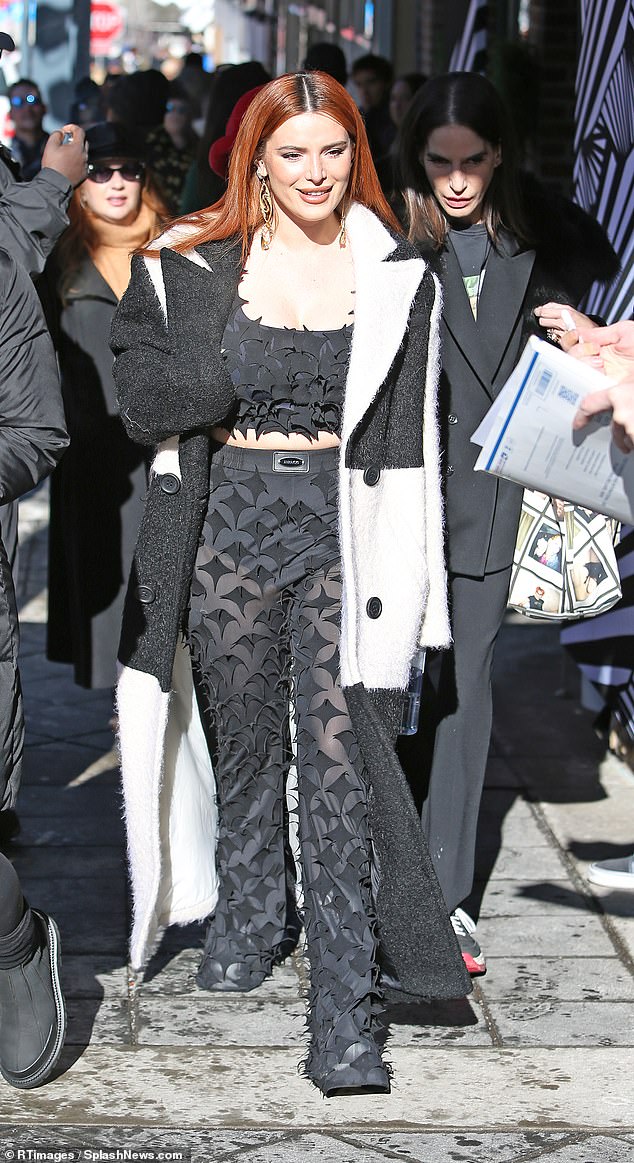 Out and about: Bella Thorne, 25, was spotted on the bustling streets of Park City, Utah on Sunday, which is day three of the 2023 Sundance Film Festival

Thorne (born Annabella Avery Thorne) was seen soaking in all the festive enthusiasm on the bustling streets of Park City decked out in a black sheer ensemble consisting of pants and a matching crop top.

And with the temperatures sifting between a low of single digits and a high of 19 degrees Fahrenheit, the Florida native covered up with a long black and white overcoat that fell nearly top her feet.

Rounding out her overall look, she also donned a pair of black boots, and had her dyed fire-red tresses styled long, straight and flowing well past her shoulders with a center part.

Stylin’: The actress and singer soaked in all the festival’s festive enthusiasm decked out in a black sheer ensemble consisting of pants, a matching crop top and a black and white overcoat

The former star of the Disney Channel series Shake It Up (2010-2013) kicked off her Sunday by taking to her Instagram page and posting a photo of herself sipping on coffee amid a snowy backdrop.

Decked out in a blue dress with matching gloves and a fluffy gray overcoat, Thorne declared, ‘Good morning Sundance,’ at the top of the photo.

A few hours later she shared two close-up pictures of herself that showed her flashing a seductive look at the camera and another that caught her looking out to her left. 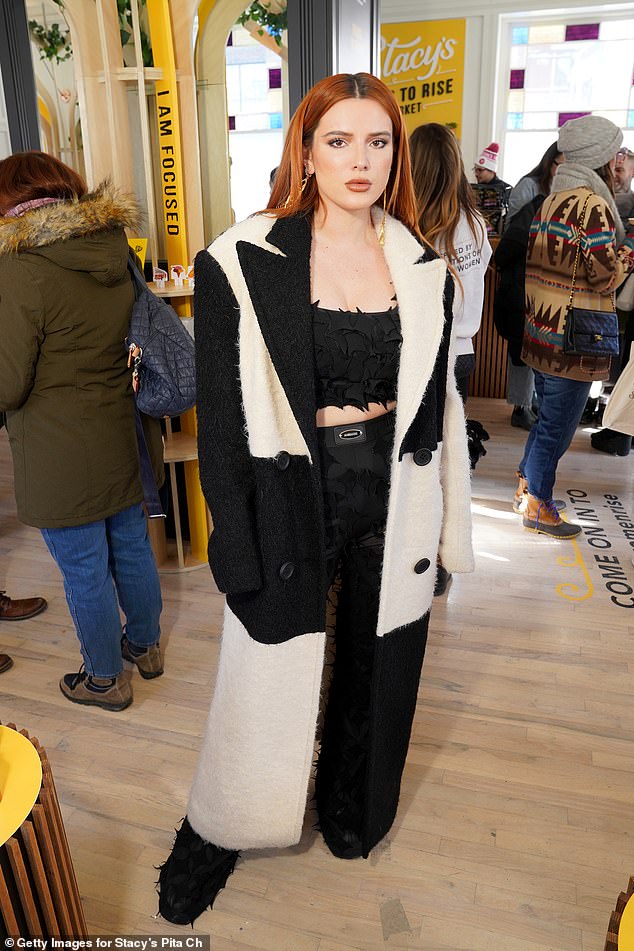 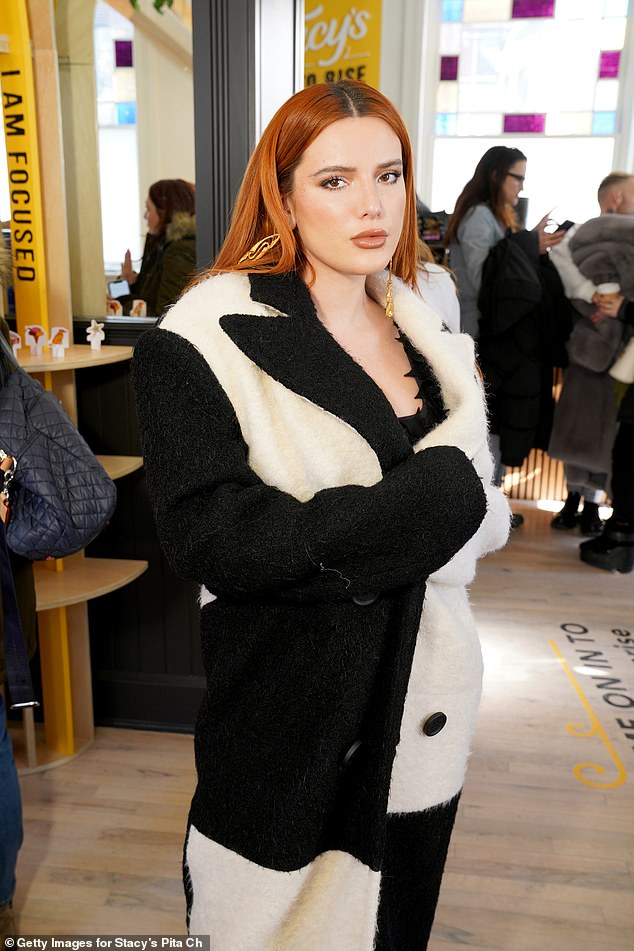 Accessories: The star accessorized with a pair of oversized gold earrings 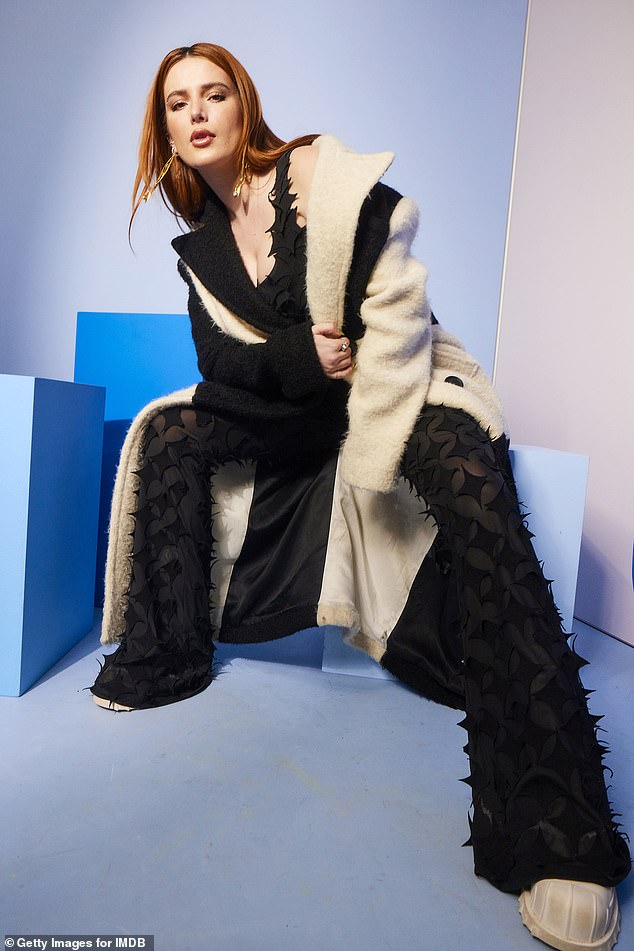 Portrait: She also posed for a portrait at the IMDb Portrait Studio at Acura Festival Village 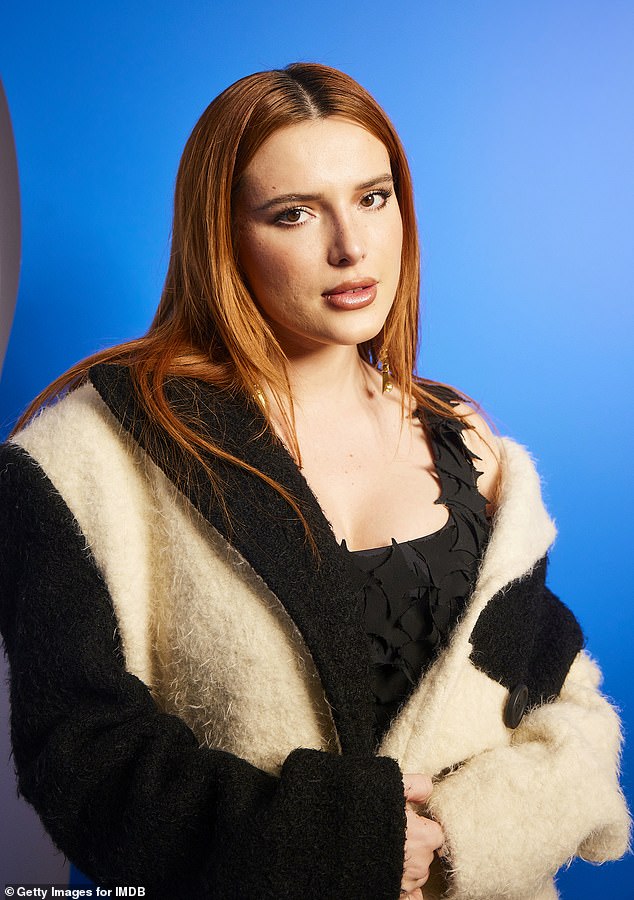 Magnetic: The talented star gave the camera a magnetic glance

Eventually, Thorne made her way to Hotel Park City where she joined her co-stars Stephen Dorff, Jason Genao, Karrueche Tran and Moisés Arias to discuss Divinity with the Deadline festival team.

‘[It was] a very unorthodox set. I liked that,’ Thorne revealed at the Deadline Studios event. ‘I feel like we’ve all been working a really long time, and it’s nice to kind of be thrown into something that is so, so different than what you’re expecting.’

She went on to share that the film was done with ‘a really really small tight crew,’ and recalled how interesting it was to watch how the unorthodox filmmaking methods ‘looked on the monitors’ after a take. 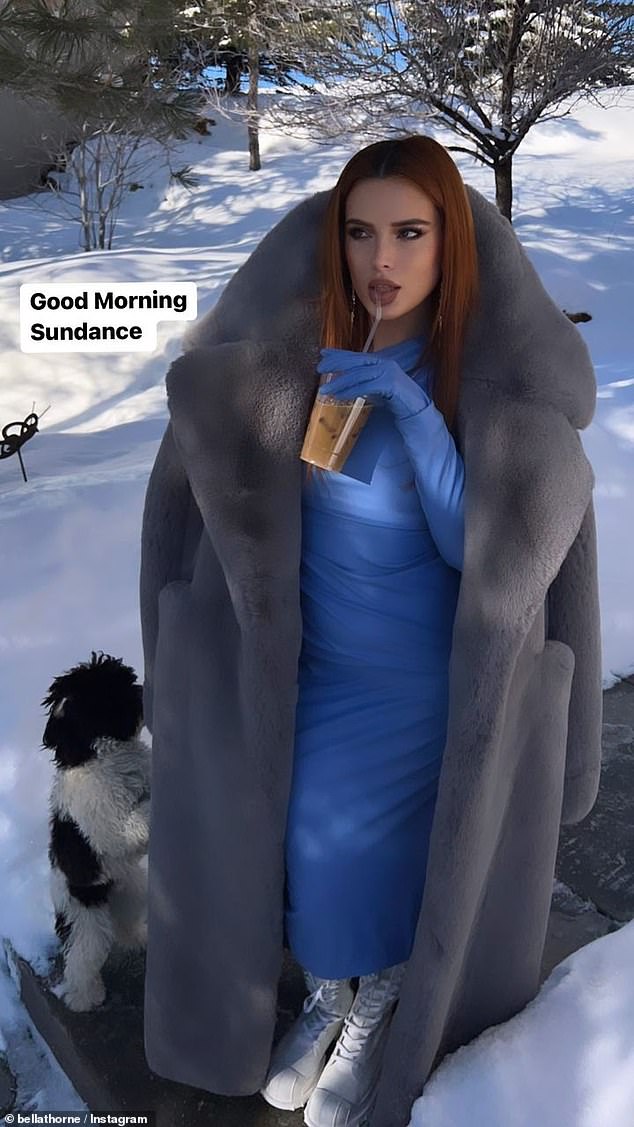 Winter wonderland: The former star of the Disney Channel series Shake It Up (2010-2013) kicked off her Sunday by taking to her Instagram page and posting a photo of herself in a blue dress and gray oversized overcoat while sipping on coffee amid a snowy backdrop 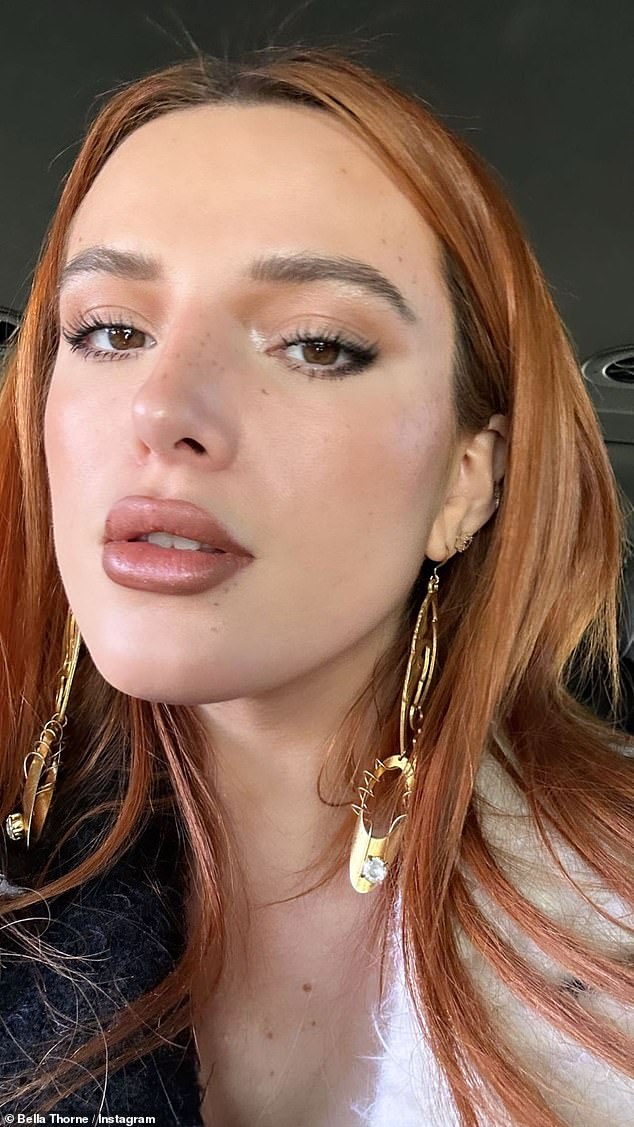 Working it: A few hours later the actress shared a couple of close-up photos of herself that showed her flashing a seductive look at the camera 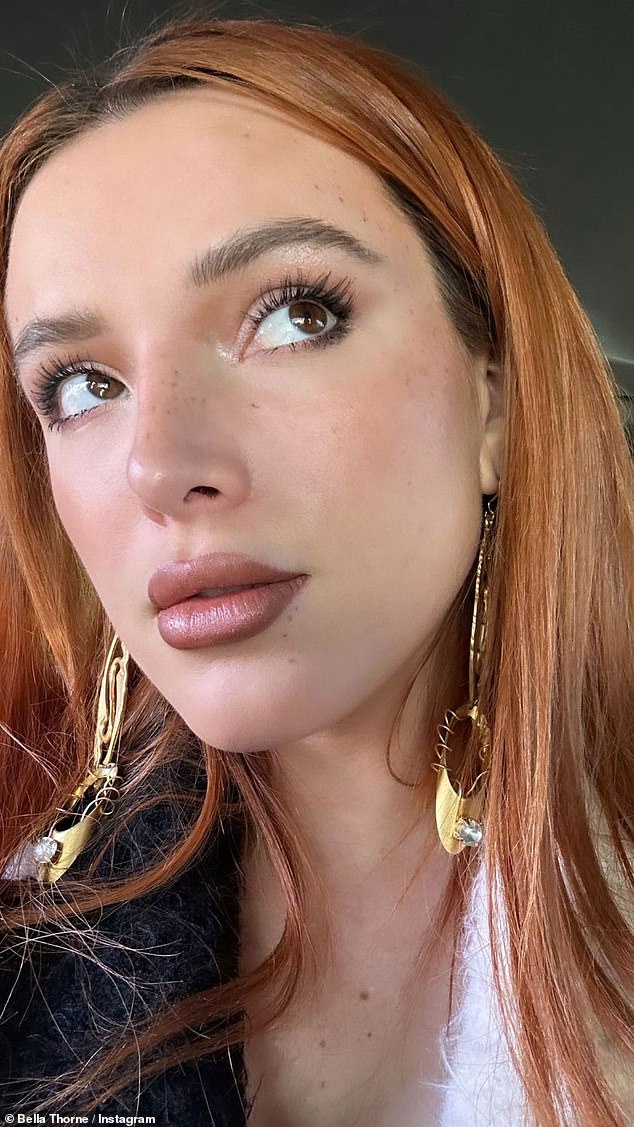 Working it: The social media darling also shared a photo that caught her looking out to her left

Written and directed by Eddie Alcazar, Divinity tells the story of ‘an otherworldly human existence, where scientist Sterling Pierce (Scott Bakula) has dedicated his life to the quest for immortality, slowly creating the building blocks of a groundbreaking serum named ‘Divinity.’

Jaxxon Pierce (Stephen Dorff), his son, now controls and manufactures his father’s once-benevolent dream. Society on this barren planet has been entirely perverted by the supremacy of the drug, whose true origins are shrouded in mystery. Two mysterious brothers (Moises Arias and Jason Genao) arrive with a plan to abduct the mogul, and with the help of a seductive woman named Nikita (Karrueche Tran), they will be set on a path hurtling toward true immortality, according to Deadline. 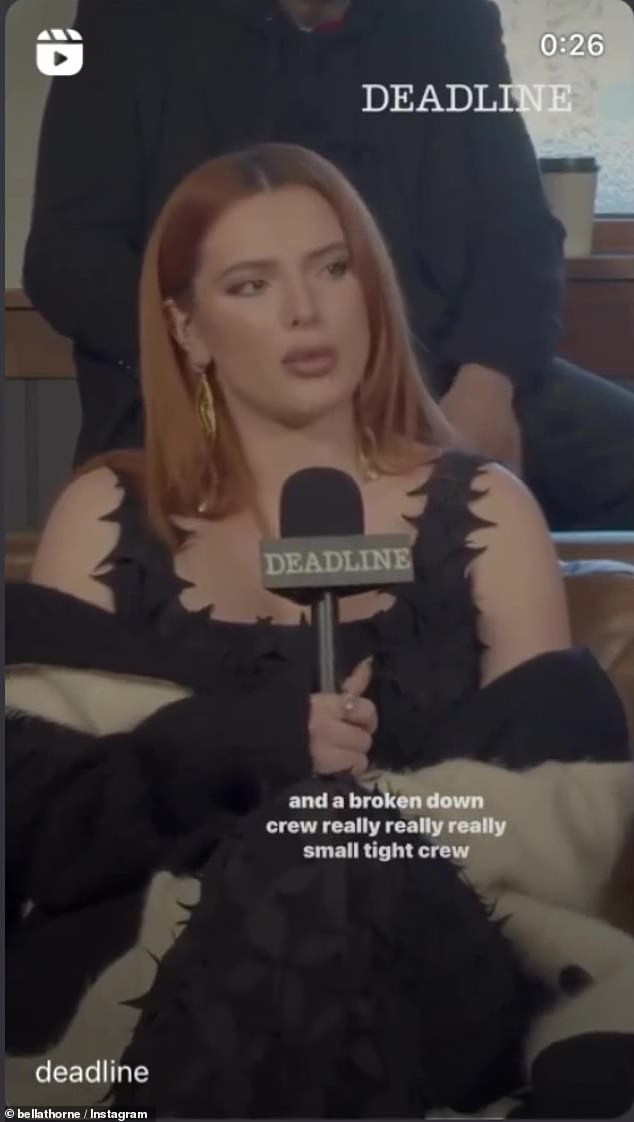 Promo mode: Eventually, Thorne made her way to Hotel Park City where she joined her co-stars Stephen Dorff, Jason Genao, Karrueche Tran and Moisés Arias to discuss Divinity with the Deadline festival team

Chief Minister Arvind Kejriwal on Friday said Delhi has somehow gained control over the second wave of COVID-19 and the city will now...
Read more

Married At First Sight star Olivia Frazer reveals why she will...
Read more

It’s prime time for the Taurid meteor shower: How to see a flaming fireball or four

Workplace PSA: Treat Everyone With Kindness

The company I work for has been undergoing massive restructuring over the past four months, unexpectedly shifting the dynamic and putting many new...
Read more

The marvelous benefits of using custom soap boxes for the brands

A bar of soap is the best invention of human beings in the past years. It allows the people to clean themselves and remove...
Read more
Business

For most of the borrowers who clearly have no idea as to how the business loan underwriting process works, getting started can be a...
Read more
Business

The US generates almost $50 billion in cosmetic sales every year. Even more awing than that is that the cosmetic industry grows by a...
Read more