Latin America’s development bank has become the latest battleground in the fight for global influence between the US and China, after its chief warned the lender had helped Beijing boost its presence in the region.

Mauricio Claver-Carone, the recently-installed head of the Inter-American Development Bank, said Washington had allowed China to gain an economic foothold in Latin America by underfunding the lender for years and turning a blind eye to how Beijing had used its membership of the institution to win a disproportionate share of contracts.

“For decades, the US, across the political spectrum, has undervalued the IDB,” Claver-Carone said in an interview with the Financial Times. “As a result, China filled that financial vacuum to their advantage. Hopefully, that lesson has now been learned.”

The IDB, founded in 1959, is one of the world’s oldest development banks and a significant power player in Latin America, doling out almost $13bn of loans last year. China is one of 48 members of the Washington-based institution and joined in 2009, making it eligible to bid for projects funded by the lender.

Claver-Carone, a former Trump administration official, last year became the first American to lead the bank following an aggressive campaign that was backed by Donald Trump and opposed by Joe Biden. He has since pushed for the US to support a capital increase for the institution to offset China’s influence in Latin America.

The US has watched with concern for a long time about China’s inroads in Latin America, but countries simply haven’t had a better offer

To support his argument, Claver-Carone pointed to figures showing that China had won a big chunk of IDB-funded contracts over the past decade despite being the bank’s smallest shareholder, with a 0.004 per cent stake.

Chinese engineering and construction companies won $1.7bn worth of IDB-funded contracts between 2010 and 2020, making it the fourth largest recipient of deals behind Brazil, Argentina and Peru, according to the bank’s data.

During the same period, companies from the US — the largest IDB shareholder with a 30 per cent stake — won contracts worth $249m, underscoring how China has used its tiny shareholding to expand its presence in Latin America.

The focus on the IDB and China, which has also made billions of dollars of direct loans to countries in the region to fund infrastructure projects, comes as Beijing faces increased scrutiny over its global economic clout in Latin America, Africa and Asia.

Claver-Carone’s push for a capital increase is supported by some senior Democrats, including Bob Menendez, chair of the Senate foreign relations committee, but is not universally backed by the party’s lawmakers.

Menendez told the FT that China had “exploited the IDB” for its own economic gain and said the fact that it contributed less than half of 1 per cent of the IDB’s core funding raised “serious questions about how China manoeuvred to make itself one of the bank’s top procurement partners”.

The Senate is currently debating a package of China bills that would boost scrutiny of Chinese economic practices in Latin America, including a provision to require US intelligence agencies to examine how Beijing is influencing decisions at institutions including the IDB, the World Bank and the IMF.

The legislation under consideration would also authorise the Biden administration to request a US-funded capital increase for the IDB.

One person briefed on the debate said the Biden administration was keeping an open mind on a capital increase pending the completion of an IDB study commissioned earlier this year. 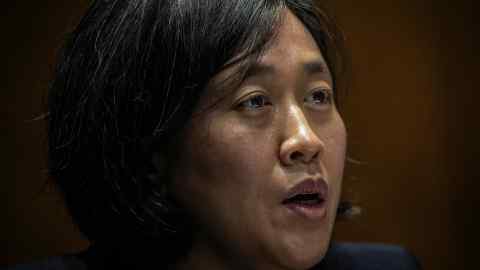 Some lawmakers, including Patrick Leahy, the Democratic head of the Senate appropriations committee, oppose an increase. But others say the US must do more to counter Beijing’s influence.

“As Beijing continues to exploit vulnerable nations through debt trap diplomacy, we must remain vigilant and protect our interests at multilateral institutions such as the IDB,” Marco Rubio, the top Republican on the Senate intelligence committee, told the FT.

Mark Lopes, who was the US representative on the IDB board from 2015 to 2018, said Washington had to shoulder some of the blame for allowing China to become an increasingly large investment player in Latin America.

Lopes added: “The US has watched with concern for a long time about China’s inroads in Latin America, but countries simply haven’t had a better offer. The US has historically undervalued the IDB.”

Latin America’s development bank has become the latest battleground in the fight for global influence between the US and China, after its chief...
Read more

Optimize your website with effective SEO (Search Engine Optimization) strategies to increase its visibility when people search for a keyword related to your content....
Read more

Is it possible to get car insurance for a week?

It is generally possible to get a non-permanent car insurance policy. Nowadays, many policies get advertised as 7 days auto insurance or even single-day...
Read more
Business

With each passing day, you will witness a steady shift towards sustainability in the textile sector. The utility of recyclable and biodegradable materials is...
Read more